Hiding Biden is the best way to get him elected

The less voters see of him, the more they like him 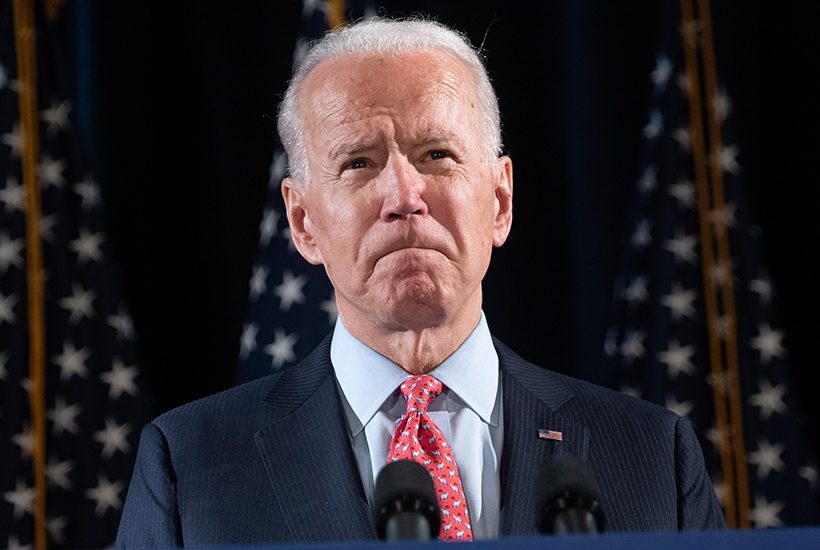 So Mrs American Voter, which septuagenarian sex abuser do you want to be President?

The whole ‘#MeToo’ business probably should have taken a back seat in 2020 — given the epochal health crisis, the vast COVID-19 death toll and the collapsed US economy. But sex always makes headlines and this month Joe Biden, the presumptive Democratic nominee, finds himself wrestling with the shocking allegation that in 1993, he ‘digitally penetrated’ a young woman staffer called Tara Reade.

Biden adamantly denies Reade’s claims. However, as someone who peddled the ‘believe all women’ mantra when it suited him politically, he is now hoist by his own canard. In 2018, Biden said that Christine Blasey Ford should be ‘given the benefit of the doubt’ after she accused Brett Kavanaugh, Donald Trump’s nominee for the Supreme Court, of sexual assault. Reade’s allegation, while by no means damning, is arguably more substantial than Blasey Ford’s — so now Biden looks like a hypocrite at best. And all those earnest American feminists who spent years calling Donald ‘Grab ’em By the Pussy’ Trump a rapist now have a dilemma. If they want Trump gone, they probably must support someone who is, by their own ridiculous standards, a sex criminal.

The Reade drama has exposed what most conservatives knew all along — the Blasey Ford story was a political hit-job disguised as a moral crusade. Democrats, it turns out, only believe women who accuse Republicans. For the leading lights of the party, loyalty to Biden now outweighs any other concern, especially since he could be in the White House in seven months.

‘I believe that women deserve to be heard, and I believe that they need to be listened to,’ said Stacey Abrams, who many people think Biden will choose as his vice-presidential nominee. ‘But I also believe that those allegations have to be investigated by credible sources. The New York Times did a deep investigation and they found that the accusation was not credible.’ She somehow kept a straight face.

All the ‘#IBelieveJoe’ hashtags on social media will not quell the discontent. Many party activists and media figures are already unhappy with Biden as their candidate, for a number of reasons. They are now keen to use the Tara Reade allegations against him. There’s talk of a ‘plan B’ for the election, one which doesn’t involve Biden. A ‘minority plus woman’ candidate could be drafted in to wash away the party’s sin in nominating another old white pervert. That idea probably won’t go very far, since the Democratic nomination process is all but wrapped up.

Unless he can be persuaded to stand down, which so far he has shown no inclination towards doing, it would be almost impossible to stop him. But the Democrats’ brazen double-standards over sex abuse claims might cause them to suffer at the ballot come November. Then again, it might not.

It’s worth remembering that Biden’s presidential campaign almost collapsed as soon as it began because of sleaze allegations. Various pictures emerged of him being too handsy with women or sniffing their hair. He ended up half-apologizing. From here on, he said, he’d be ‘much more mindful… but I’ll always believe [that] governing, quite frankly, life for that matter, is about connecting. It’s about connecting with people. That won’t change’.

Poor Joe couldn’t grope a woman now even if he wanted to. Since the coronavirus crisis hit, he has been stuck inside, conducting his campaign through the internet and having connection issues. Biden’s incipient dementia means his ‘virtual town halls’ are painful to watch. Like many an oldie, he seems utterly baffled by the tech. He loses his thread even more often than usual, which is saying something. One Republican consultant I spoke to called his video-link interviews ‘proof-of-life appearances’, which is cruel but apt. Biden’s digital penetration is quite feeble. He has fewer than 50,000 subscribers on YouTube; Trump has 390,000 — and @JoeBiden has just over five million followers on Twitter while @realDonaldTrump has almost 80 million.

Curiously, however, none of that seems to matter. The Biden campaign appears to have realized that keeping their candidate hidden is their best strategy. Even before the shutdown, his staff were trying to limit his airtime and shorten his speeches in order to reduce the gaffes. Biden’s appeal in 2020 is based not on who he is but who he was — ie. vice president to Barack Obama before the dreaded Donald came along and turned Washington upside down. The more his campaign can summon the ghost of Biden past, the better.

Polls suggest that, for all his invisibility, Biden is beating Trump in the crucial swing states. Trump enjoyed a small approval bump at the start of the pandemic. That fell away in April. The President’s wild public appearances suck up all the media oxygen, but that seems to help his Democratic challenger. Biden is now six percentage points ahead in Pennsylvania, which Trump won by less than 1 per cent in 2016. He’s three points ahead in Florida and eight in Michigan.

Polls tend to underestimate Trump’s appeal. In June 2016, he trailed Hillary Clinton by far bigger margins — 17 points in Michigan; 14 in Florida and Pennsylvania. He won all three states. Trump’s team attributed their success to a group they called ‘double haters’ — that is, people who disliked Clinton and Trump. These voters broke decisively for the Republican in the final weeks of the campaign.

The worry for Trump in 2020 is that the haters seem to prefer Biden. People just don’t loathe Joe in the way they did Hillary. If Biden manages to choose an amiable vice-president, he might lock in that advantage — especially since, given his age and mental frailty, many voters expect his ‘Veep’ to take charge quite soon into his first term anyway.

Trump’s pitch to swinging voters was going to be simple: look at how great the economy is. The coronavirus has destroyed that. If Trump can reopen the country soon and, as his son Donald Trump Jr puts it, ‘Make America great again… again’ by November, he could begin to claw back those independent votes. But that will be immensely difficult. Polls suggest a large majority of Americans are worried that normal life will be restored too quickly. Economy-choking lockdowns are strangely popular.

COVID-19 has changed the rules of electioneering. Biden is not engaging with voters or getting his message across — yet, perversely, that’s why he is winning. He doesn’t need to be himself. He just needs to be the not-Trump candidate in a country that is tipping into a deep recession. For Team Biden, the worrying part about the Tara Reade claim is that it reminds the public that Joe exists.