Italy owes Wales reparations for the wrongs of the Roman Empire

Gangs of heavily-armed war-criminals went rampaging across Britain and helped themselves to my people’s homelands. And they called us ‘foreigners’ 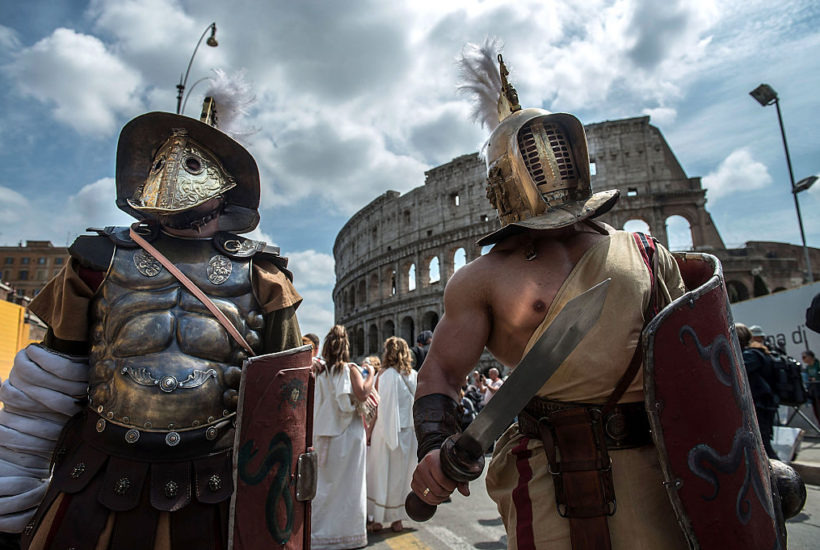 There’s talk of reparations in the air. Lobbyists from around the world are demanding sin-payments from former colonial powers. Let me add my voice to the clamor on behalf of this island’s indigenous Celtic people. My family are from Llanelli in Carmarthenshire and I believe that my compatriots have an excellent case to make against the Roman empire. This is not an extinct claim — the money is still in play.

Britain was invaded by Julius Caesar in 55 BC and his visit was followed up a century later by the Emperor Claudius and his mob. The Roman occupation, which involved the military subjection of the Celtic peoples, lasted for about four centuries. The transfer of Celtic slaves to Rome was part of the normal commerce of empire; now have a look at Italy in the present day. It attracts over 60 million tourists a year: some of those tourists are keen to inspect Roman ruins, some of those ruins were built by slaves, and some of those slaves came from Britain. So modern Italy continues to benefit from the efforts of my captured forebears. This simple economic fact appears to validate my claim against the Italian government.

But I have another claim which probably stands a better chance of success. My ancestors were forced to endure a second round of aggressive expropriations during the Dark Ages. Newcomers invaded the eastern coasts of Britain from Saxony in Germany and Angeln in Denmark. These blue-eyed, blond-haired interlopers were not just land-hungry colonists — they were xenophobes too. The proof still exists in our language. The root ‘wal’ or ‘wel’ in Anglo-Saxon means ‘stranger’ or ‘outsider’, which is a bit rich. Gangs of heavily-armed war-criminals went rampaging across Britain and helped themselves to my people’s homelands. And they called us ‘foreigners.’

The invasion was highly successful. My Celtic forebears were pushed ever further west until they were left clinging to the rain-lashed fringes of Cornwall, Wales, Cumbria and Scotland. The intruders, meanwhile, having struck a bargain with the new arrivals from Normandy, set sail around the world and established themselves as a global superpower — Great Britain. But history tells us that Great Britain is based on stolen property. The dispossessed Celts, like me, have a sound claim against those who seized our ancestral lands.

So if a Westminster government is to make payments to anyone, it should start with the original victims of Anglo-Saxon aggression.

However, this is a cause I have no wish to pursue. First, I dislike its legal basis. Neither side can produce a contract that has been broken — the idea of ‘you owe me money because your ancestors wronged my ancestors’ doesn’t sound like justice to me. It has the air of a ghost-story. Secondly, it characterizes me as a beggar awaiting the largesse of my conquerors and playing that subordinate role to the English doesn’t remotely appeal to me. As much as I love my Anglo-Saxon friends and neighbors, I would hesitate to do anything that might amplify their sense of self-importance. Reparations would undoubtedly have that effect.

Finally, I don’t ask for money because I know I won’t get any. Not a penny. Not in a million years. The transfer of assets, if it were to happen, would take place between governments. Westminster would put up taxes and send a check to the Welsh Assembly in Cardiff. And the politicians in Wales would never dream of depositing money in the savings accounts of individuals. They would argue, with some justice, that reliable family lineages can’t be traced back through the Norman era to the sixth or seventh centuries AD. So the reparations would be soaked up by officials in the form of bogus cultural events, festivals of art, fireworks displays, exhibitions of Celtic jewelry gathering dust in deserted museums, and days of remembrance accompanied by free Prosecco for the ruling elite. The budget would probably stretch to educational bursaries for a new breed of lecturers to instill students with a life-long sense of bitterness.

There may be a lesson here for the citizens of other countries awaiting payback for the crimes of empire: a new game of exploitation is afoot. The residents of former UK territories who feel aggrieved are simply pawns in the hands of their avaricious rulers. The descendants of slaves are being used, just as their ancestors were.

This is how reparations will pan out: the working poor in Britain will be taxed more heavily, while the governing classes overseas will be pampered more lavishly.