The House Judiciary chairman is prepping for Mueller disappointment. Sadly for him, Americans aren’t tired of winning 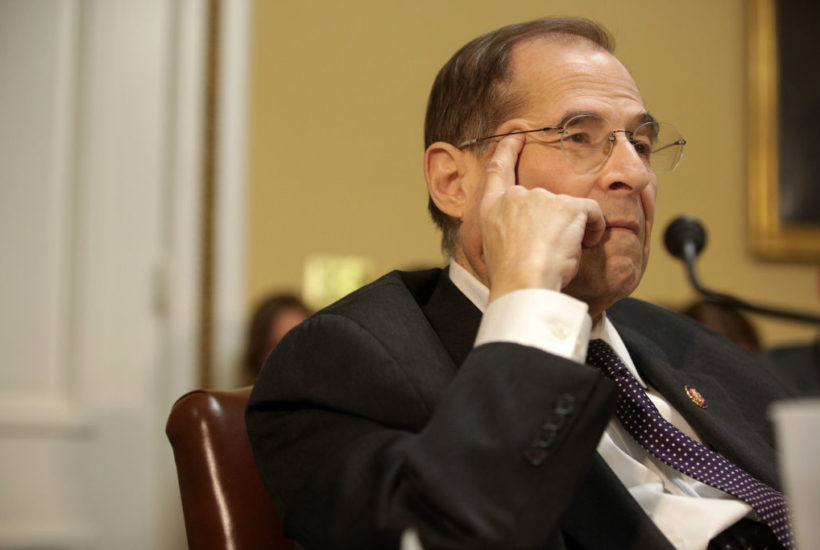 What does desperation smell like? It smells like House Judiciary Chairman Jerry Nadler, who is reprising his ‘Impeach Trump!’ act from 2017, this time with a gavel in his hand.

No one knows when Robert Mueller will deliver his report to Attorney General William Barr, and no one knows what portions, if any, General Barr will make public. But the hissing sound you have heard over the last several weeks is the air going out of Mueller’s Get Trump probe as story after story has been crafted to manage expectations down regarding ‘Individual 1,’ aka Donald J. Trump. Mueller bagged Paul Manafort for tax related issues a decade or more ago, and folks like Roger Stone and Michael Flynn for making the mistake of testifying before Congress (Stone) or talking to the FBI (Flynn).

But no one not named Bill Kristol now thinks that Mueller’s expensive, long-running entertainment will issue in any actionable charges against the President.

Hence the ‘insurance policy’ being framed by Congressman Nadler. The headline of a column in Politico yesterday cut to the chase: ‘House Democrats open sweeping corruption probe into Trump’s world.’ They’ve sent letters to 81 people associated with Donald Trump demanding ‘documents.’ Which documents? All the ones that show the President in a bad light or that might be used to frame him for misconduct or ‘high crimes and misdemeanors.’

Like what? Well, they aren’t quite sure, but it is not stopping them from ‘demanding documents from the White House and Trump’s namesake company, charity, transition team, inauguration and 2016 campaign, as well as several longtime associates and the president’s two adult sons.’ Hoover it all up, boys! There has to be something, somewhere in Trump’s past we can nail him for.

It would be funny if it were not so pathetic. Congressman Nadler says that ‘President Trump and his administration face wide-ranging allegations of misconduct that strike at the heart of our constitutional order.’ Asked to be specific, he mutters darkly about ‘abuse of power’ and ‘obstruction of justice.’ For example? Are you ready? Donald Trump has frequently disparaged Robert Mueller’s investigation as a ‘witch hunt.’ That, according to Congressman Nadler, constitutes obstruction of justice.

Except, of course, that it doesn’t. Yesterday, President Trump dismissed the flood-the-zone probe as a ‘political hoax,’ which is too kind a phrase for malevolent effort to unseat a duly elected president.

To gauge the level of desperation and insanity coursing through the emunctory channels of Democratic and NeverTrump anxiety, ponder this statement from Fox News jester Juan Williams yesterday: ‘It is no longer outside the realm of possibility that Trump could refuse to leave if he loses the 2020 election.’

Williams supplies no evidence supporting this judgment. He just says that Donald Trump has a lot of Twitter followers and social media support. The irony, of course, is that when it seemed certain that Hillary Clinton would win the 2016 election, Barack Obama assured everyone that America’s election could not be rigged. But then when the impossible happened and Donald Trump won, the entire Democratic establishment, aided by their press corps (CNN, MSNBC, The New York Times, The Washington Post, etc.) and the NeverTrump chihuahuas went to work to try to delegitimate the election with an eye on the distant holy grail, impeachment and removal from office.

Donald Trump has been besieged by the albatross of pointless investigations from before he took office until the present moment. Nevertheless, he has persevered and achieved success after success in his first two years: historically low unemployment, robust economic growth that Barack Obama declared was impossible until it became actual, at which point he tried to take credit for it, scores of stellar judicial appointments, two Supreme Court nominees confirmed, important inroads in rolling back the regulatory environment, rebuilding the military, and asserting an America First trade and foreign policy.

At every step, he has been dogged by a recalcitrant ‘resistance’ that, to the country’s embarrassment and their own shame, has put their political agenda before the common good. Most recently, the Democrats denied the president funds with which to secure our southern border. So he declared a National Emergency and is in the process of redirect funds to build the wall that was a central promise of his campaign. Yesterday, Senate Majority Leader Mitch McConnell acknowledged that the Senate will pass a resolution to block the president’s emergency declaration (though he also pointed out that he doubted the Senate would be unable to override a Presidential veto).

I have reservations about using declarations of national emergency in order to push through policies that Congress is unwilling to legislate and that a majority of the people are unwilling to support. And I worry that President Trump’s decision to do so may come back to haunt Republicans someday when the Democrats are back in power and decide that the use of plastic straws, the popularity of Rush Limbaugh, red meat, airline travel, or sugary drinks constitutes a national emergency.

In the context of Trump’s efforts to keep America safe, however, his resort to the expedient of presidential prerogative has a couple of things going for it. It shows that he means business. And it is likely to be effective.

Some of the president’s critics warn that he is too wedded to a worldview that makes effectiveness the criterion of success. They would seem to prefer a high-minded, decorous species of inaction. It’s more dignified than what Donald Trump vulgarly refers to as ‘winning.’

The problem for the president’s critics, however, is that most Americans rather like winning. They don’t mind referring to it as ‘winning.’ And they are sick to death of the mandarins parading about Washington, lips sewed tightly to the public teat, as they lecture the unsubsidized masses about how they should comport themselves.

On the campaign trail, Donald Trump said that, when he became president, Americans would embark on such a winning streak that they would get sick of winning. President Trump has indeed given this country an extraordinary winning streak. But we’re not sick of it yet, not by a long shot. Which is one of the many reasons that Jerry Nadler appears ridiculous as well as malevolent. There he goes again, yapping about investigating everything that Donald Trump has ever done or thought about doing. But as in that old Arab proverb, the dogs are barking, but the caravan moves on.