‘Biology’ is as problematic as the dark arts 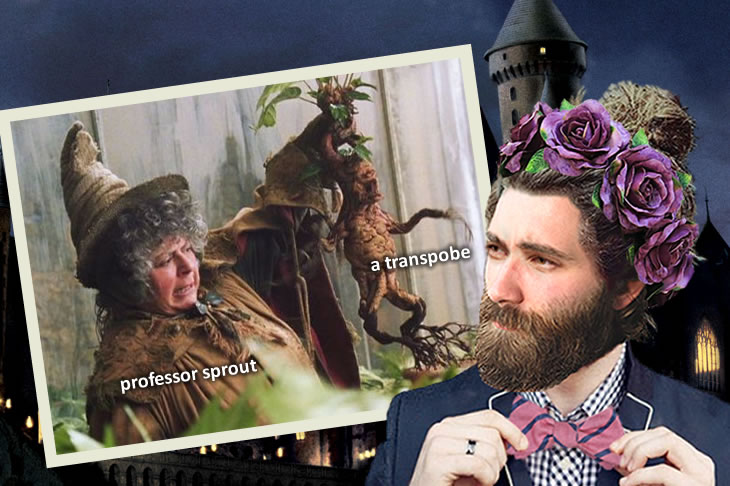 Professor Sprout pulls up TERFs by their dastardly roots

Professor Sprout has called out J.K. Rowling’s violently problematic comments regarding trans people in a recent article in the Times of London.

‘If you seriously want to become a woman you should be allowed to. You can’t be fascist about it,’ said the Hogwarts Herbology teacher, as she expertly re-potted a Bubotuber without wasting so much as one drop of its valuable pus.

I could not agree more with the professor’s words. Since I transitioned, ‘Biology’ has become as problematic a subject as the Dark Arts. I am beginning to suspect Rowling had intended for us to see Voldemort as the hero in her books all along, seeing as she has far more in common with him than any Gryffindor.

Over the past few months, Rowling’s ignorant comments have unleashed a horde of transphobes upon the trans community. The Death Eaters were playful kittens in comparison with Rowling’s TERF Army. Of course, Sprout’s declaration of Rowling’s innate fascistic tendencies will lead to the age-old inane question: ‘What is a woman’?

As a trans woman myself, I feel that I am fully qualified to not answer that question. You see, there is no answer. You may as well ask: ‘What is love?’ or ‘What is green?’ or ‘What is the point in a Gender Studies degree?’ The answer to each of those questions is incredibly complex and different for everyone.

For me, being ‘woman’ is an awareness of my own femininity. The moment I found I preferred Adele to Slipknot, I had a suspicion that the doctor who oversaw my birth and assigned me the role of ‘boy’ had been severely mistaken. For centuries, this was the way of the world. A child would be born and immediately prescribed a so-called ‘biological sex’, based on nothing more than the formation of their genitals. Knowing that this medieval practice still goes on, despite the fact we now know about the existence of clownfish is agonizing.

For years I attempted to fit my entire being into the description of ‘man’. As a child, it was easy because my parents would never have allowed me to dress like a stripper and call myself ‘Jarvise’. I never wanted to do either of those things, but that wasn’t the point. As I grew older, I began to assert my personality more and more, but with that came the challenge of accepting myself for who I am. My sister often wore jeans and t-shirts and the teenage ‘me’ became jealous of her. I so wanted to be able to dress the way she did. I mean, yes, I also wore jeans and t-shirts, but in my eyes, she wore them ‘as a girl’. I would often sneak into her room when she had gone out with her friends and put on her jeans. I would parade around in them while dancing to her Radiohead CDs. It felt amazing. When I heard the front door open, I would hurriedly change out of her jeans and put my own jeans back on, terrified that my ‘shameful secret’ would be revealed. Once, she noticed her Dr Martens had been put back in the wrong place, but thankfully assumed I had merely moved them as a mischievous trick.

This preference for wearing my sister’s jeans and listening to the music she liked awoke within me a gradual understanding that I yearned to be a woman. In later years, after creating an account on Tumblr, I became aware that I did not in fact ‘yearn to be’ a woman, I *was* a woman.

Of course, whenever I explain this to TERFs, it predictably leads back to the question: ‘B-b-but what *is* a woman?’

Well, understand this now and let us finally be done with the transphobic rhetoric surrounding ‘biological sex’: A woman is a feeling, a spontaneous and uncontrollable reaction to the world around you. A woman is pure essence. She is ‘being’. She is malleable like clay, flowing like liquid, ever-changing, non-conforming. Like the T-1000. She is a wave crashing on the beach, she is the wind whistling through the trees… she *is* the trees. Woman is everything and nothing and all that lies in between.

Professor Sprout knows this and has her opinion firmly rooted (pardon the Herbology pun!) in reality. I am delighted that the rest of the wizarding world has so far denounced Rowling’s hate speech. I can only wait with bated breath to see what Hagrid has to say about Rowling’s defection to the Dark Arts. I imagine he is not best pleased.