Joe Exotic is an ordinary American

He is perhaps a little too fond of drugs and weaponry, but he has also overcome great personal misfortune 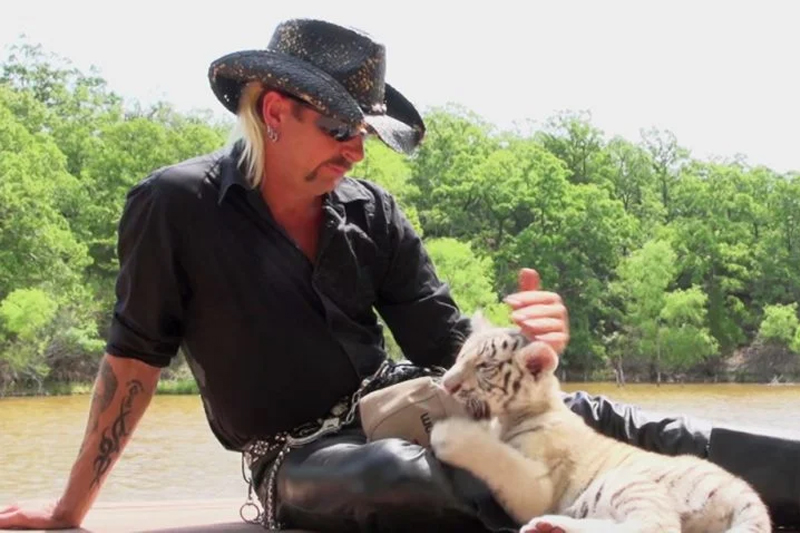 Netflix’s Tiger King has been touted as ‘the only show that’s crazier than the world outside right now’. Besides being weird beyond measure — a seven-part freak show combining meth-heads, involuntary amputees, firearms, sex cults, gay polygamy, cocaine, rednecks, attempted murder and, yes, more tigers than you could shake a flaming torch at — it offers fascinating parallels with the most important debate of our time: the eternal conflict between liberty and authority.

As you may have noticed, this coronavirus pandemic has brought out the best and the worst in people and produced two highly polarized visions of the world. On one side, the mavericks, skeptics and don’t-tread-on-me rebels who fear greatly — as their God Emperor Trump does — that the cure is going to be more damaging than the disease. On the other, the control-freaks, puritans and rule-takers who believe that no amount of government intervention is too excessive when it comes to dealing with the Worst Crisis in the History of the World.

For the first lot — let’s call them the Deplorables — the undoubted hero of this series will be the Tiger King himself, Joe Exotic (né Schreibvogel), owner of the biggest private tiger collection in the US: proud mullet-wearer, 2018 gubernatorial candidate for Oklahoma (he won 18.7 percent of the Libertarian primary vote), badly lip-synced artiste behind the fake country song ‘I Saw a Tiger’, currently in a federal prison for crimes including wildlife violations and the attempted murder of a tiger mother named Carole Baskin.

The second group, I imagine, will prefer to lionize Baskin, the Tiger King’s nemesis: animal rights activist, founder of the tiger protection organization Big Cat Rescue, instigator of the (mooted) Big Cat Public Safety Act. After all, what could be more disgraceful in the early 21st century than that private individuals should be free to keep dangerous endangered species in cages without heavy-handed federal regulation?

These true-life Netflix docs tend to foster violent partisanship. I’m definitely Team Joe Exotic. Perhaps I’m being unfair. Maybe in real life Baskin is the most caring, nurturing, wonderful, decent and lovable person in the world. But on the evidence of this series, I’d say that if I had been in Joe Exotic’s shoes I too would have been tempted to bump off the meddling witch. She comes across like a crybully, a freedom-hater, a virtue-signaler, a killjoy and (given that her own zoo profits massively from all the big cats she has had seized from other owners) a hypocrite of the worst order. Also there’s that awkward question, hinted at with characteristic delicacy in Episode Three: what exactly did happen to Baskin’s first husband, the one who supposedly disappeared to Costa Rica and hasn’t been seen since?

The key moment for me is the one in Episode Two where sweet, dykey-looking zookeeper amputee Kelci Saffery explains how she lost her arm. Turns out it was almost ripped off by one of Joe’s 270 or so tigers when she ill-advisedly stuck it through the bars of the cage. The doctors could have saved her hand through extensive surgery, but Kelci opted for amputation and to return to work within five days — to reduce the bad publicity for Joe and his private zoo.

It seems to me that a man who can command that kind of loyalty from his employees deserves both admiration and sympathy. Joe is perhaps a little too fond of drugs and weaponry, but he has also overcome great personal misfortune. When his dad learned Joe was gay, he made Joe vow not to turn up at his funeral. Joe then tried to commit suicide by driving off a bridge. He broke his back, then built a successful career as a magician, entertainer, singer, vlogger and tiger-wrangler. In doing so, he brought employment and fulfillment to a number of similarly unemployable weirdos, rejects and misfits. And he brought enormous delight to the thousands of people who experienced tigers, bears and snow leopards up close at his Greater Wynnewood Exotic Animal Park in Oklahoma.

Baskin wanted to put a stop to all these manifestly good things, while trying to claim the moral high ground even as she wrecked them. There are too many Baskins in this world and too few Joes. Apparently there is already huge demand for a follow-up series (brought to you, incidentally, by the same team that made the documentary Fyre, about the Caribbean music festival from hell). I hope by the time it’s made Joe has somehow been released from his cage and is back where he belongs, with his big cats.