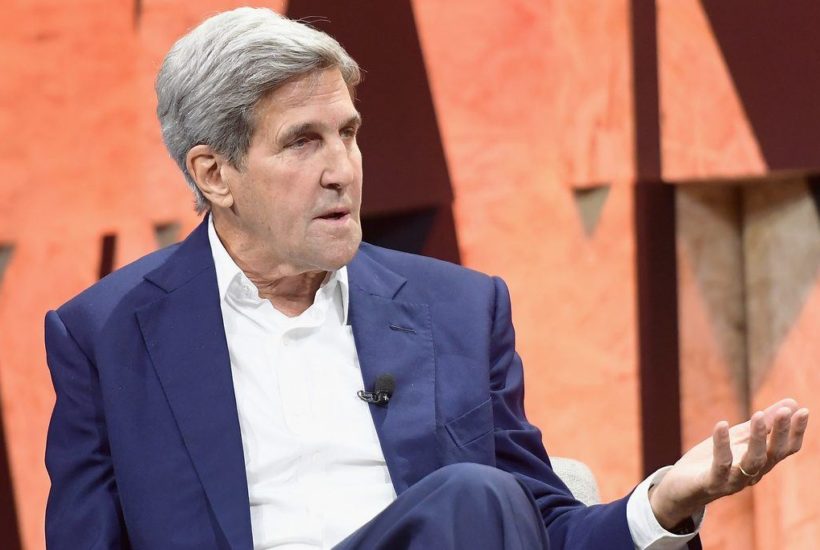 Former U.S. secretary of state John Kerry has met privately with Iranian foreign minister Javad Zarif twice in the last couple of months. Was Kerry expressing concern about the regime’s brutal treatment of protesters, with 8,000 arrested and 50 murdered since unrest began in late December? Was he admonishing Zarif because his government has spent the proceeds of the nuclear deal they negotiated on the police state within the country and aggressive adventurism outside it? No. John Kerry isn’t interested in the fate of the Iranian people. Kerry was conspiring with Zarif to figure out how they might keep their deal afloat in the face of opposition from the man who succeeded Kerry’s old boss as president.

Donald Trump, campaigning for president, regularly called the Joint Comprehensive Plan of Action nuclear agreement a “terrible deal” and promised to rip it up if elected. Americans voted him into office anyway, suggesting that a great many of them weren’t terribly attached to the accord. But the man who helped secure it is, and, as the Boston Globe revealed this weekend, “Kerry has been on an aggressive yet stealthy mission to preserve it, using his deep lists of contacts gleaned during his time as the top US diplomat to try to apply pressure on the Trump administration from the outside.”

Democrats (and many Republicans) were outraged when they learned that Trump’s former national security advisor Michael Flynn had discussed sanctions with the Russian ambassador after Trump was elected but before he was inaugurated. Some demanded he be charged under the Logan Act, an old and not-often-used piece of legislation that prohibits Americans from negotiating with foreign governments that are in the midst of a dispute with their own government. Former acting attorney general Sally Yates even brought it up in congressional testimony. Flynn has pleaded guilty to lying to the FBI about those conversations, and they lost him his post in the administration.

But none of those critics has complained about John Kerry’s “unusual shadow diplomacy,” as the Globe put it. It’s something of a pattern: Only Republicans can be accused of treason for allegedly negotiating with foreign governments when they’re not in office, as Richard Nixon and Ronald Reagan were. Democrat John Kerry, on the other hand, is just trying to save the world, or at least “stability in the Middle East.” Because the Middle East has only gotten more stable since the JCPOA was signed in 2015, right?

Kerry hasn’t spoken just to Zarif, a man who comes to New York every year to speak to fawning reporters who never question his glaring lies, such as that Iran does not jail anyone for his or her beliefs. He’s also met a couple times with French president Emmanuel Macron and once with German president Frank-Walter Steinmeier, as well as talked on the telephone to the European Union’s Federica Mogherini, who smiled for selfies with Iranian lawmakers when she was in Tehran recently. Those lawmakers regularly chant “Death to America” in the Iranian parliament, and John Kerry, out of government and out of relevancy, has been meeting privately with their top diplomat.

But then, when was he relevant? What did John Kerry accomplish as secretary of state? He might once have claimed to have helped get chemical weapons out of Syria by brokering a deal with the Russians, but that bit of diplomacy has been proven delusory. And President Trump took the United States out of the Paris climate agreement, which had no binding effect on its signatories anyway. In fact, Kerry’s tenure as secretary of state was a failure, except for a nuclear deal with sunset clauses that ensure it will never be a lasting legacy. His work with a man who demanded earlier this year on Twitter that Americans and Europeans stop “questioning Iran’s missiles” is a pathetic attempt to hold on to something he can point to as an accomplishment. Of course, he is going to have books to sell when his memoir hits stores this fall.