Will Jon Tester win in Montana?

A close race in the last best place 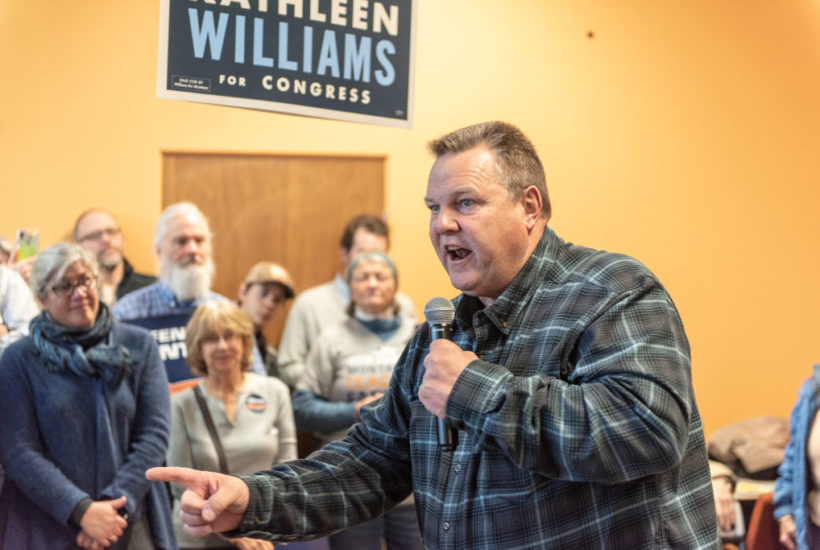 The Democratic Party appears to see its red-state Senate races as sticky short-term exercises in triangulation and coalition-building, best conducted as far from the national spotlight as possible. It has neglected the opportunity of grouping this handful of candidates behind an assertive vision of its own future leadership in rural and small-town America. Take the Democratic senator Jon Tester, the only working farmer in the United States Senate. ‘Jon? He’s just real,’ said Martha Small, a member of the Northern Cheyenne tribe I spoke to. ‘He’s a real person. My concerns are his concerns. Public lands, Native American issues – suicide among our 18-24 youths being the number one.’ Montana’s suicide rate is the highest in the country, almost double the national average; this is driven in part by an opioid epidemic among Native Americans, which Tester has worked on a bipartisan basis to address with legislation and federal funding.

Tester is one of very few figures on the national stage demonstrating a way of simply being a liberal in and of rural America. On the face of it, it’s surprising that he has never been mentioned as a presidential contender.

Instead, the ideas-people are aggressively marketing – not to say fetishizing – Tester’s image as an embodiment of rural life. Over six foot tall in his cowboy boots and $12 flat-top haircut, weighing in at 300 lbs, and with three fingers lost to a meat-grinder at the age of nine, Tester sure looks the part. Reporters from New York media companies have flocked to his photogenic farm in Big Sandy, where he tends to take interviews inside the cab of his combine harvester. His haircut and two-finger salute have become a hipsterized iconography on his campaign merchandise. These are the dictates of out-of-state fundraising in Montana’s most expensive ever election.

For months, television screens and web browsers have been awash with shrill, negative, misleading ads, mostly paid for by ‘dark money’ super PACs and other national partisan organizations. In Montana and the other rural, Democratic-held battlegrounds where the president is popular, the Republican side is trying to focus its races on a national agenda: the Supreme Court, immigration, gun rights, and, above all, loyalty to the president himself. The Republicans seem threatened by Tester’s local authenticity, especially as their own candidate, the State Auditor Matt Rosendale, is a former real estate developer originally from Maryland.

‘On TV, Jon Tester drives a tractor, but it’s Montana that’s getting taken for a ride,’ begins one Super PAC ad; ‘Jon Tester likes to talk about his Montana roots, but the truth is he’s gotten pretty cozy in the D.C. swamp,’ begins another ad, paid for by the National Republican Senatorial Committee. Rosendale initially tried to run as a ‘rancher’ himself, with his own ads featuring him loafing in front of a red barn, cows grazing in the background.

Public records showed that he had bought a ranch to live on when he moved to the state at the age of forty, but had rented out his land and never owned any cattle himself. ‘Not a rancher, not one of us,’ booms a typical super PAC ad on behalf of Tester. Rosendale eventually changed his Twitter bio from ‘conservative rancher’ to ‘Trump conservative,’ and got busy painting Tester as an out-of-touch traitor to the state.

At a rally President Trump threw for Rosendale in Billings, Mont., back in September, this messaging appeared to be making headway. Jess Halvorson, a 32-year-old carpenter from Big Timber, called Tester ‘a menace to Montana. He’s more like a Senator from Maryland or New Jersey.’ Tester was ‘not really a farmer, he just does that for press coverage,’ Halvorson continued. A man in a black Stetson and green checked shirt, who preferred to remain anonymous, echoed the point: ‘I could go sit in a tractor right now, it doesn’t make me a farmer!’ He incorrectly believed that Tester was living full-time in a ‘multimillion-dollar property in D.C.’ Arla Murray, in a straw sunhat bearing the logo of the Republican National Committee, had travelled down from her family’s ranch; she was under the impression that Rosendale was the farmer, and would naturally ‘represent Montana well’ for that reason.

After he’d finished amiably taking selfies with the students at Montana State University (he seemed to know his volunteers, and others in the crowd, by first name), I asked Tester about this fight for the mantle of authenticity.

‘Just follow me around, that’s all I can tell ‘em,’ he said. ‘I’m not somebody who lies. I tell the truth. And we farm. I just changed the oil in my tandem-axle truck yesterday morning. I don’t know if you can still see the oil under my fingernails or not.’

He seemed a little offended by my question. This wasn’t what mattered, he said. ‘What matters is, I don’t think you can fool Montanans. In the end, I trust Montanans to make the right decision.’ According to the latest polls, his race is a statistical dead-heat.

Tester is compelling in person. He’s also at all times surrounded and directed by the same kind of campaign team as any other major candidate: the young, ambitious, mostly male, Ivy League types – at any rate, definitely not farmers – who executive-produce the Jon event in its thirty-million-dollar entirety. How real should anyone expect it to be? I left MSU and headed 150 miles north, along the roaming banks of the Missouri River, to the old Air Force-Stratcom town of Great Falls, where Minuteman ballistic missiles rest snugly in their silos. There, as dusk settled in orange and lilac, the Secret Service secured a small vacant bank building for the purpose of holding a Don event.

Montana calls itself ‘the last best place.’ The suicide rate notwithstanding, living under its famous ‘Big Sky’ seems to offer roughly the same psychic benefits as an ocean view clear to the horizon. It’s something even a man like Donald Trump Jr. can appreciate. The president’s son has been coming to the state for years to indulge his passion for big-game hunting, the sport he takes as seriously as any dark-age prince. It has enabled him to forge the semblance of a personal connection to a base of his father’s supporters.

To hear Trump Jr. tell the story, he first met Matt Rosendale, along with Congressman Greg Gianforte, the Republican who holds Montana’s single seat in the House of Representatives, as it were by chance, out on the rugged Montana trails. (Gianforte is a software developer, also originally from the East Coast; he is most famous for assaulting a reporter on the eve of his special-election victory last year.) They bonded over a prairie dog shoot, and Trump Jr. has been campaigning for Rosendale and Gianforte ever since, visiting the state at least three times since June. At the vacant bank in Great Falls, Rosendale introduced Trump Jr. to two hundred, mostly elderly audience members, as ‘a hunter, fisherman, and outdoorsman’ – and a marksman he had personally witnessed striking ‘an eight-inch target at the range of one mile.’ (A one-mile shot is generally the preserve of elite military snipers.)

Before the show got started, I talked to Buddy Lundstrom, an older, sharp-looking man in a black leather jacket. He was a plumber from Great Falls, an avid hunter himself. When I asked if gun rights were important to him for that reason, he said that, actually, he was ‘what you would call a traditionalist.’ He hunted strictly with bow and arrow – not even a high-tech compound bow, but a recurve: ‘Just a stick and a string, wood arrows with feathers. I have to get a lot closer, and I have to hunt a lot harder, but that’s what I love to do.’

Lundstrom and his bow were deadly at 30 yards (sometimes deer, mostly elk). These days he mainly went out alone: ‘I’m not a youngster anymore, and all my old friends are either dead or got tired.’ But he still had the strength himself. He didn’t know much about either of the Republican candidates, except that ‘they’re both that way,’ meaning they were outdoorsmen too, ‘so I appreciate that.’

It was a strain to see what someone like Lundstrom would really be getting out of Trump Jr.’s hyperactive, adenoidal performance, or for that matter out of ostentatiously belt-buckled Matt Rosendale, a strange skeletal figure who muddles his words in a goofy mid-Atlantic accent, pronouncing even ‘Montana’ in a jarringly alien way. But the Republicans brought the house down, as members of a friendly, religious crowd called out amid the speeches in the manner of an evangelical church service: ‘They are insane!’ (the Democrats); ‘Because they’re stupid!’ (the press); ‘He loves us. He loves us’ (the president). Trump Jr.’s signature line of assault against Jon Tester is that Tester ‘hasn’t had a state hunting license in six years’ – while he, ‘the son of a billionaire from New York City,’ has held one constantly. ‘He’s not from Montana, he’s just really good at marketing himself like he is,’ Trump Jr. continued, gesticulating and doing funny voices like his father.

‘Yeah, it’ll be fun to see Don Jr.,’ Buddy Lundstrom had said, before changing the subject. ‘I’ve worked all my life,’ he explained. ‘And some people are down on their luck, and they need to be taken care of. Not everyone can work, I don’t expect that. But too many people take advantage of it. People that don’t need to set at home. And, you know, if you’re not willing to work, you can’t expect someone else to give you a handout.’

People in Montana aren’t Republicans, they’re conservatives, Lundstrom said. ‘Nothing against what he believes,’ he said of Tester, ‘but he’s not representing the state of Montana.’ After all the ridiculous TV ads, and surreal incursions by the president and his family (most recently Trump himself, this weekend), the Montanans that you can’t fool are still likely to be Republican voters. Especially in light of what another speaker at the rally – Kimberly Guilfoyle, former Fox News personality, current girlfriend of Trump Jr. – referred to as ‘this wonderful Trump economy that we’re all experiencing.’ The combination may be enough to drag even Matt Rosendale over the finish line.