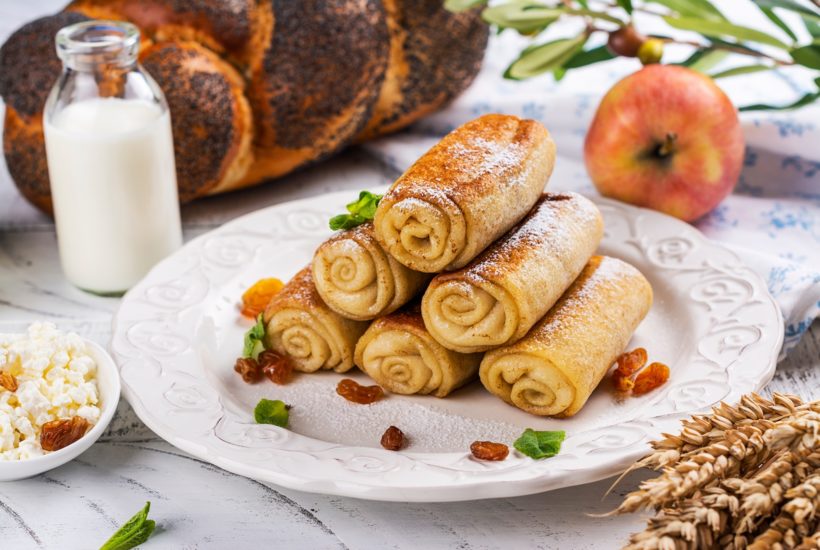 Until fairly recently, all over the western world there were specialized eating places catering largely for Jews who respected the kashrut dietary laws. From family caffs to white tablecloth establishment, these called themselves ‘dairy restaurants’. They were nearly, but not quite, vegetarian, since they allowed (the kosher-defined) fish with fins and scales.

This wondrously weird, heavily illustrated book is a threnody to the now almost vanished dairy restaurant, seeing it as a kind of paradise — though as its author, the artist Ben Katchor, writes: ‘This pleasure garden, Eden, was open to the public and naturally attracted a crowd.’ The first 60 pages depict visually (and explicitly in prose) the origins of the Mosaic Law, beginning with the Garden of Eden — in which the forbidden fruit was dates (the apple was native to Kazakhstan, not to the Middle Eastern desert).

Derived from the rabbinical prohibition of ‘seething the kid in its mother’s milk’, the intricate Hebrew dietary rules gave birth to eating places where, on the whole, fish but no meat was served, honoring the belief that meat was murder in more senses than one. Did not the grain-offering Cain kill his pastoralist brother Abel, who was taking his first-born lamb to be sacrificed to JHVH —as Katchor denotes Jehovah? Not that the deity did anything more than savor the fragrance of burnt offerings.

According to Katchor, the first vegetarian restaurant was Mrs Matthews’, on Princess Street, Manchester. He illustrates almost every page of this eccentric book with his own magnificent drawings (he won a MacArthur ‘genius’ grant for cartooning), but he is a better draughtsman than scholar. For example, he accepts Rebecca Spang’s identification of the first restaurant to have opened in Paris as Roze de Chantoiseau in 1773, ignoring the claims of M. Boulanger in 1765; and the lack of footnotes or index makes it impossible to check his many other factual-sounding statements.

Still, there were definitely a large number of late 19th-century eateries in the English-speaking world offering menus of milk in all its forms, as well as vegetables, grains, pulses, eggs, bread and fish. In New York alone there were so many they were divided into those that served dishes with Yiddish, Russian, Polish or Romanian names — including blintzes, kasha varnishkes, pirogen, kreplach, latkes and mameliga, not to mention smoked fish, gefilte fish and herrings — and those that mimicked the American lunchroom. Nowadays, dairy restaurants have been replaced by those serving the food of Sephardi Jews, from hummus to lamb kebabs. In London there are many such Israeli-inspired establishments, starting with Ottolenghi.

My own relative, Rav Abraham Isaac Kook (1865-1937), sometime chief rabbi of Jerusalem, felt that the Talmud’s dietary laws were just a modified form of vegetarianism, and that it was occasionally necessary to eat meat to avoid the dehumanizing effect of asceticism. Jews can, as Katchor puts it, ‘express their misanthropy within the world through complaint and argumentation, not mortification of the flesh’. Hardly any self-identifying Jew now observes the rules of kashrut, and though Jew and gentile alike sympathize with the call to consume less meat, we all gotta eat pastrami occasionally, if only from nostalgia.

Continuing the Edenic conceit, Katchor sees every meal in a dairy restaurant as a re-staging of the historical-mythological incident, when

‘Paradise is de-Christianized; the fall of man is replaced with a satisfied customer and a “come again” sign; YHVH is replaced by an enlightened restaurateur…and Satan is demoted to the position of a unionized waiter, who tempts customers with a borscht-stained menu.’

In my childhood in America there were plenty of dairy restaurants, where my father took me to eat on his frequent business trips to New York. Though I relished the smoked salmon, the whitefish, the delectably flavored bread rolls and the syphon of seltzer placed on every table, I also remember a ghastly meal at the fancy Ratner’s on Second Avenue, where the Partisan Review  crowd came to grumble at each other. The clientele was Jewish, of course. Even if Laurence Olivier, Noël Coward and Frank Zappa lunched at Ratner’s, so did Arthur Miller and Leonard Bernstein; and many thought they were doing their digestion a favor by eating there.

Naturally, the dairy restaurant made its first appearance in the old Austro-Hungarian empire, with celebrated examples in Vienna, Czernowitz and Bucharest — in fact in those countries where ‘the population was able to digest fresh milk’, says Katchor. Well, yes; but how many Jews are actually lactose intolerant? Up to 80 percent of Ashkenazi Jews, we learn from a reference in the BMJ (June 30, 2007).

Whoops. The obvious conclusion is that the heartburn and indigestion that is the subject of so many Jewish jokes was related to the milky diet of most patrons of these restaurants — at least until experience taught some of them that herring was more digestible than cream.