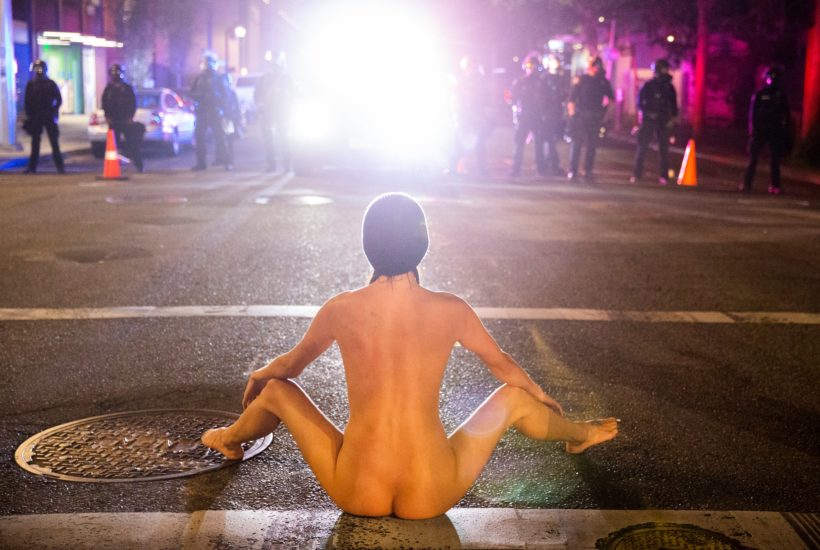 ‘She emerged as an apparition from clouds of tear gas’, writes Richard Read; ‘[a] woman wearing nothing but a black face mask and a stocking cap’. No, you are not reading cyberpunk erotica. You are reading the Los Angeles Times.

Read’s article is ostensibly about protests in Portland, and the Trump administration’s attempts to suppress them through the use of federal agents. As he writes about the naked activist who so entranced social media this weekend, though, things get a bit uncomfortable.

‘The woman making her statement Saturday was altogether uninhibited,’ Read declares, getting right to the meat of his story, ‘at one point standing on one leg and raising her arms in an arc-type motion.’ Richard. How closely were you watching her?

‘Later she rolled on her back in a graceful pose, then stood again.’ Was this man taking copious notes or has he been watching a video on repeat?

Read’s piece climaxes with the implicit comparison of this nude woman to Tank Man, the Chinese gentleman who stepped in front of a column of tanks in the aftermath of the Tiananmen Square massacre. You might think the latter contained more powerful symbolism, because, if nothing else, it followed a massacre. Somehow, though, admirers of ‘Naked Athena’ cannot see the wood for the trees — or, perhaps, the trees for their wood.

No one can deny that a slim young woman in the nude makes for effective propaganda for a radical cause. No one would remember FEMEN, which was ubiquitous in the mid-2010s, if its bare-breasted activists had not been beautiful. Even then, though, reporters gave the sense of holding it together — and not holding something else.

Of course, Cockburn is being very mean. We know that Mr Read has no intention of being lascivious. But seeming so is a consequence of reporters desperately trying to elevate passing curiosities to iconic status. If this woman comes to be as memorable as Tank Man, Cockburn will personally strip naked and dance in Portland.

Meanwhile, the activists themselves are debating whether ‘Naked Athena’ is an example of white privilege. ‘Naked Athena can kiss my ass,’ posts one:

‘All the black girls twerking in front of cops laughing at them were hood rats, ghetto, and “doing too much” Now one random white woman does yoga naked once and y’all eat it up? MESS!’

No doubt we shall continue fleshing out this story as more is exposed.