We are living in an age of cultural climate change

Without moral principles, freedom will not survive 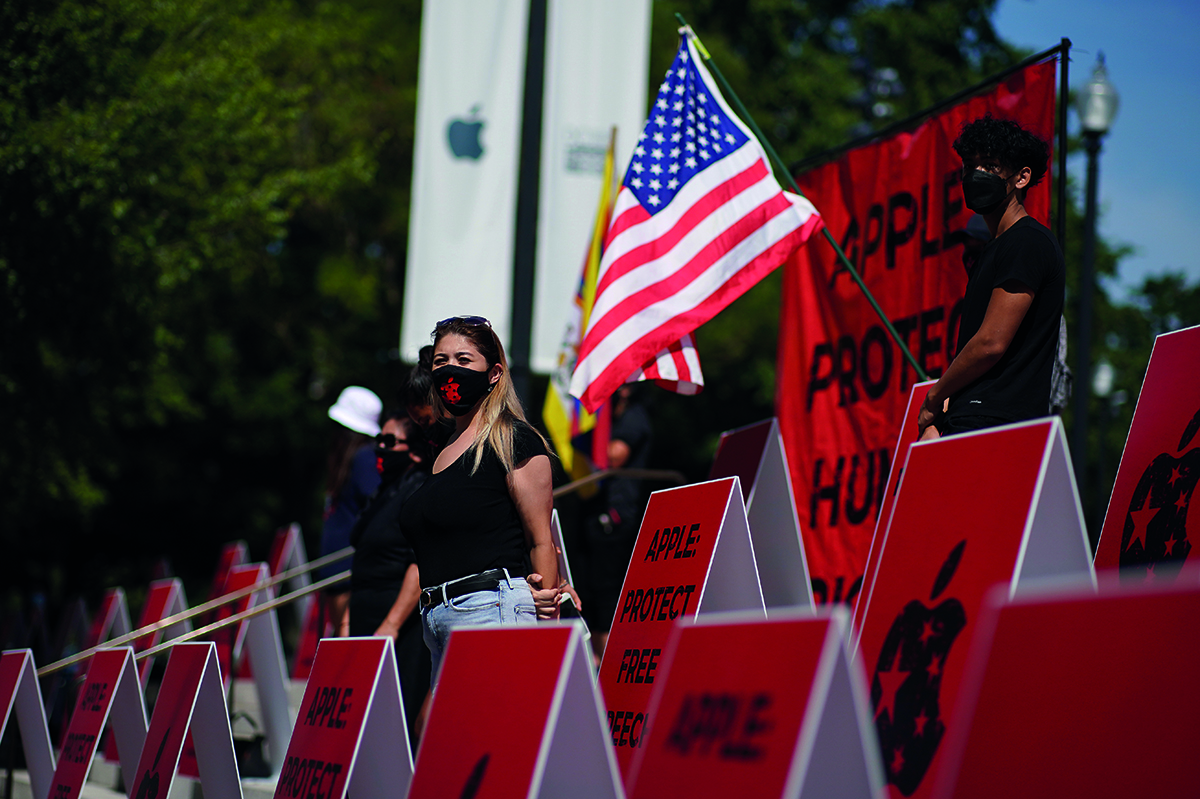 We are living in an age of cultural climate change

A free society is a moral achievement. Over the past 50 years in the West this truth has been forgotten, ignored or denied. That is why today liberal democracy is at risk. Societal freedom cannot be sustained by market economics and liberal democratic politics alone. It needs a third element: morality, a concern for the welfare of others, an active commitment to justice and compassion, a willingness to ask not just what is good for me but what is good for ‘all of us together’. It is about ‘Us’, not ‘Me’; about ‘We’, not I’.

If we focus on the ‘I’ and lose the ‘We’, if we act on self-interest without a commitment to the common good, if we focus on self-esteem and lose our care for others, we will lose much else. Nations will cease to have societies and instead have identity groups. We will lose our feeling of collective responsibility and find in its place a culture of competitive victimhood.

The market will be merciless. Politics will be deceiving, divisive, confrontational and extreme. People will feel anxious, uncertain, fearful, aggressive, unstable, unrooted and unloved. They will focus on promoting themselves instead of the one thing that will give them lasting happiness: making life better for others. Freedom itself will be at risk from the far right and the far left, the far right dreaming of a golden age that never was, the far left dreaming of a utopia that will never be.

Liberal democracy is at risk in Britain, Europe and the United States. So is everything that these democracies represent in terms of freedom, dignity, compassion and rights. The most technologically advanced societies the world has ever known have forgotten just this: we are not machines, we are people, and people survive by caring for one another, not only by competing with one another. Market economics and liberal politics will fail if they are not undergirded by a moral sense that puts our shared humanity first. Economic inequalities will grow. Politics will continue to disappoint our expectations. There will be a rising tide of anger and resentment, and that, historically, is a danger signal for the future of freedom.

I believe that we are undergoing the cultural equivalent of climate change, and only when we realize this will we understand the strange things that have been happening in the 21st century in the realms of politics and economics, the deterioration of public standards of truth and civil debate, and the threat to freedom of speech at British and American universities. It also underlies more personal phenomena like loneliness, depression and drug abuse. All these things are related.

These are not normal times. Few people in recent years can have escaped the feeling that strange and unprecedented things are happening.

Throughout the West there has been a loss of trust in public institutions and leaders, a rise of extremism in politics, and a notable failure of governments to address fundamental problems. A new phenomenon has begun to emerge: of ‘identity politics’ — political campaigning focused not on the nation as a whole but on a series of self-identifying minorities, leading to the counter-politics of populism on behalf of a beleaguered and enraged native-born population who see themselves sidelined by the elites and passed over in favor of the minorities.

‘Demoralized, decadent, deflating, demographically challenged, divided, disintegrating, dysfunctional, declining,’ is how Bill Emmett describes the state of the West today. Or as the famous Jewish saying puts it, ‘Start worrying. Details to follow.’ A second set of phenomena relates to personal happiness — or lack of it. Living standards for most of us in the West have reached levels our ancestors could not have contemplated. We have access to goods, delivered to our door, from almost every place on Earth. We can choose more widely, travel more extensively, and we enjoy more personal freedom than any previous generation. Never have we had wider access to knowledge. This is in many respects the world of which our ancestors could only dream. Poverty, hunger, illiteracy, premature death — all of these things have been addressed with monumental success. Life expectancy has grown between two and three years every decade for the past century. On the face of it, we could not be in a better place.

Yet there are signs that this is far from the case. For example, in the United States, more than 70,200 Americans died from a drug overdose in 2017, a doubling of the figure in a single decade, and a tripling in 20 years. Death rates from drug overdose are almost four times higher than in 17 other wealthy nations, and for the first time in recent history, life expectancy in the United States is actually falling. Alcoholism is killing more people and more younger people. Suicide rates are up 33 percent in less than 20 years.

Drug abuse is often related to the wider phenomenon of depression, and rates of depression among American teenagers are also rapidly rising. This raises a fundamental question about where we are going in the market-economic, liberal democratic West. We may have won the battle for life and liberty, but the pursuit of happiness still eludes us. We keep chasing it, but it keeps running faster than we can.

A third dimension of our contemporary unease has to do with the economics of inequality. The most conspicuous example is the ever-widening disparity between chief executive pay and the rest. One example: in 2018 the chief executive of Disney, Bob Iger, received a total payment for the year of $65.6 million. It represented 1,424 times the median pay of a Disney worker.

In America in 1965 the ratio of chief executive to workers’ pay was 20:1. Today it is 312:1. This, though, is only part of a much wider problem: the disconnection between economics and society that has grown as manufacturing and trade have become globalized.

A fourth phenomenon is the assault on free speech taking place on university campuses, giving rise to new phenomena such as safe spaces, trigger warnings, microaggressions and no-platforming, all designed to limit or ban the expression of sentiments that might offend some students. To an ever greater extent, mob rule is taking the place of what was once the sacred mission of the university: namely, the collaborative pursuit of truth. The idea that certain views, and people holding them, might be banned merely because they might upset someone, which is what is happening in many academic circles today, is astonishing. It is the new intolerance.

These and the other phenomena are the multiple consequences of a single underlying shift in the ethos of the West. Climate change has many causes and symptoms. Likewise, divisive politics, inequitable economics, the loss of openness in universities and the growth of depression and drug abuse are the result of what I call cultural climate change. They are the long-term consequences of the unprecedented experiment embarked on throughout the West a half-century ago: the move from ‘We’ to ‘I’.

All countries and cultures have three basic institutions. There is the economy, which is about the creation and distribution of wealth. There is the state, which is about the legitimization and distribution of power. And there is the moral system, which is the voice of society within the self; the ‘We’ within the ‘I’; the common good that limits and directs our pursuit of private gain. It is the voice that says No to the individual ‘Me’ for the sake of the collective ‘Us’.

Whatever its source, morality is what allows us to get on with one another, without endless recourse to economics or politics. Morality is what broadens our perspective beyond the self and its desires. It places us in the midst of a collective social order. Morality has always been about the first-person plural, about ‘We’. Morality achieves something almost miraculous, and fundamental to human achievement and liberty. It creates trust.

Underlying much of what has happened has been the misapplication to morality of the economic principle of outsourcing. When morality is outsourced to either the market or the state, society has no substance, only systems. And systems are not enough. The market and the state are about wealth and power, and they are hugely beneficial to the wealthy and the powerful, but not always to the poor and the powerless. Thucydides tells us that the Athenians told the Melians: ‘the strong do what they want, while the weak suffer what they must’. The same, it often seems, is true today.

A society with only competition and very limited cooperation will be abrasive and ruthless, with glittering prizes for the winners and no consolation for the losers. It will be a low-trust environment in which lawyers play a large role and mutual confidence a very limited one. A society with a strong, shared moral code is a high-trust place, where the winners set an example of caring for the losers — indeed, where they do not speak of them as losers but as fellow citizens. High-trust societies are those where CEOs care for the team, not just for themselves; where politicians act for the good of all, especially the marginal and disadvantaged; and where people in distress find comfort in community rather than being left to suffer on their own. We need to recover the sense of ‘all of us together’.

Love your neighbor. Love the stranger. Hear the cry of the otherwise unheard. Liberate the poor from their poverty. Care for the dignity of all. Let those who have more than they need share their blessings with those who have less. Feed the hungry, house the homeless and heal the sick in body and mind. Fight injustice, whomever it is done by and whomever it is done against. And do these things because, being human, we are bound by a covenant of human solidarity, whatever our color or culture, class or creed.

Without moral principles, freedom will not survive. The free market and liberal democratic state together will not save liberty, because liberty can never be built by self-interest alone. ‘I-based’ societies all eventually die. ‘Other-based’ societies survive.

Morality is not an option. It’s an essential.

This is an edited extract from Morality: Restoring the Common Good in Divided Times (Basic Books, $30). This article is in The Spectator’s September 2020 US edition.