The longer lockdown continues, the more imperiled we become

A broke society is a violent society 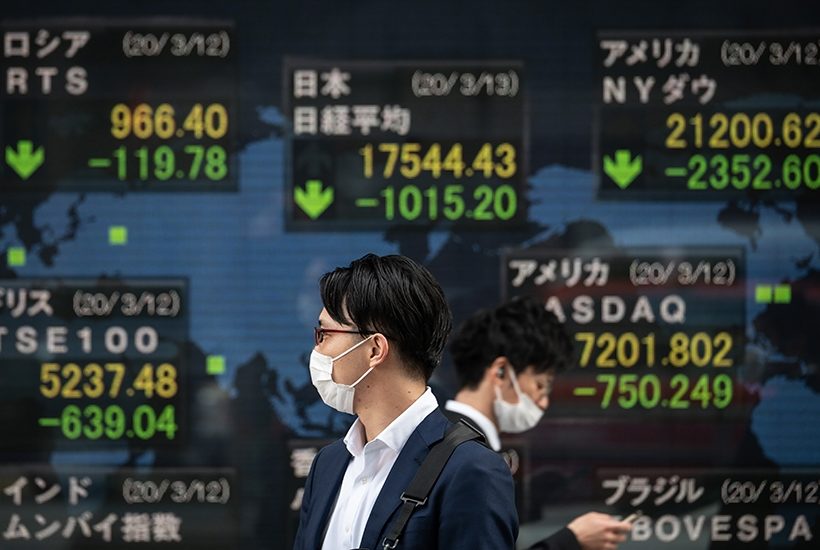 Comically, Chinese Communist party officials have speculated that Covid-19 was planted by the US army. Yet a respectable conspiracy theorist would deduce that a virus sending the rest of the world into an hysterical, wholesale economic shutdown has ‘Made in China’ written all over it. After all, China didn’t flatline its entire economy to contain the contagion, but primarily one province. At the end of this debacle, then, China could rule the world — although it won’t have many solvent customers left to buy its products. The only other countries calling the shots in future could be South Korea, Japan and Sweden, having thus far resisted the stampede to lockdown.

In my 1994 novel Game Control, a rogue demographer named Calvin Piper attempts to design a virus that will kill two billion people overnight, thereby arresting runaway population growth. I don’t imagine my friend Calvin would think much of COVID-19. In his quest for a seriously nasty bug, I bet he’d pour a vial of the new coronavirus right down the sink. For as fatalities are broadcast even for Italy and Spain, I shout at the TV: ‘These numbers are ridiculously low!’

If a headline ran tomorrow, ‘US deaths in 2020 to reach three million’, we could expect widespread popular anxiety. Likewise, the forecast ‘Global deaths to exceed 58 million by year’s end’ could drive governments to yet more draconian measures to defeat this plague. But nearly three million Americans did die last year, and so did more than 58 million unfortunates worldwide. We’re under-aware of it, but scads of people are dying around us all the time. Hate to break it to you, but we’re mortal.

We’ve been through alarmist projections of viral mortality before, and I don’t mean just Sars or Mers, but HIV. Researching Game Control in 1990, I tracked down all seven studies then available that modeled the impact of Aids on population growth in Africa, where the epidemic was exploding. Four (all authored by epidemiologists) predicted that HIV would devastate African populations, whose growth would plunge to the negative. Three (authored by demographers) predicted that HIV would have a negligible effect on the continent’s population, which would continue to soar. Thirty years later, guess who was right.

We live in factional times, so scientists and commentators are dividing into COVID camps, though allying with the smaller skeptics crowd can be dangerous. (Some contrarians are getting death threats.) Yet even the establishment Imperial College London has reduced its projections of COVID-19’s UK mortality from 500,000 to under 20,000 — roughly the annual deaths from seasonal flu. No one knows yet for sure, but evidence abounds that the lethality of this virus may be in line with flu’s 0.1 percent, and possibly as low as 0.01 percent. The disease overwhelmingly fells the elderly with often-multiple co-morbidities. I don’t mean old people don’t matter. But absent this pandemic, a large portion of this ailing cohort would have been sadly slain by other illnesses in short order. As Dr John Lee noted last week, too, fatality figures fail to distinguish dying from COVID and merely dying with it.

Prey to simplistic sentimentality, politicians loath to land on the wrong side of the bogus money-vs-people debate could keep economies in the dead zone for months on end — through the summer, or even until the mass dissemination of that mythical vaccine in, say, 2022. Unremitting ‘better safe than sorry’ policies could transform life as we know it for years to come — and not in an improving direction.

We’re anything but safe right now, and the longer these lockdowns continue, the more imperiled we and our descendants become. We’re flirting not merely with recession — we should be so lucky — but with a potentially self-sustaining depression, with all the social services decay, cultural malaise, personal desperation and generational aimlessness that would entail.

Forgive the further self-promotion to follow, but my latest novel is released in early May, and we might as well bury those hardbacks in my back garden. Of course, in converting two years’ work to compost, I have company. Or companies, I should say, many of which will go to the wall after proprietors sank not a mere two years but sometimes their whole lives into these labors of love.

My 2016 near-future novel The Mandibles portrays the United States in economic free-fall. Russia, China and friends contrive a currency to rival the dollar. In retaliation, the American president defaults on the eye-popping national debt. Naturally, the markets tank. No one lends money to deadbeats, so the US government is denied access to borrowing. The Fed runs the printing press overtime. Inflation soars. First supermarket shelves are bare (clairvoyance: the first commodity to disappear is toilet paper), and police are positioned in every aisle. Then the shelves are full, but no one can afford to buy a $300 cabbage. DC nationalizes gold, sending the army banging on doors searching for wedding rings. Meanwhile, more people are unemployed than in work, muggings are rife, and my characters are cast from their house at gunpoint.

Indeed, this pro-gun-control author had no choice but to secure her beguiling 16-year-old protagonist a revolver. Far-fetched? Public borrowing is set to skyrocket. Central banks will be tempted by the ugly shortcut of moderating sovereign debt through money-printing. Hello inflation, as well as confiscatory tax rates, because a prolonged shutdown could eviscerate the tax base. While Western firms self-isolate, many of their customers will turn to China; the deserters won’t likely come back. And a broke society is a violent society. Look at the unrest already arising in Italy. You think not being able to go to the gym now is the bad part? No, how about ‘what gym’? How about, ‘Why would I pay for a gym when I can’t afford a pint of milk?’ or ‘Screw the gym; I’ll not go anywhere only to get knifed in the street’?

Never in the history of the world have most major economies simultaneously closed shop for months on end. I’ve rarely been this shaken. And not because I’m afraid of getting sick.