Macron’s Faustian pact with the EU

Macron is taking the role of hyper-president to its limits. Castex’s statement then is no more than his master’s voice 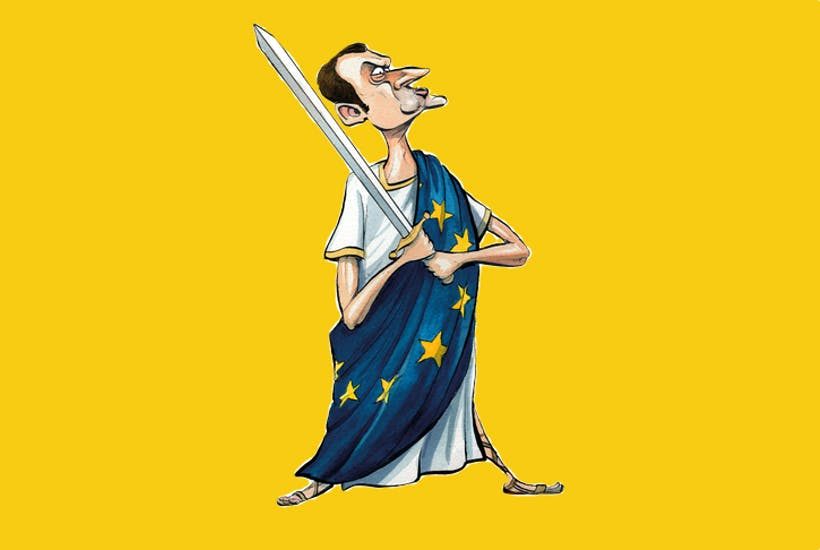 On Wednesday, the new French prime minister Jean Castex made his general policy statement to the National Assembly. We know things are getting serious in France because the new prime minister was wearing a proper suit: charcoal-gray, well-cut, elegant. No more of the boyband blue drainpipe little numbers sported by his predecessor, tailored to Macron’s foppish program of France as a ‘start-up nation’.

Castex’s audience of face-masked députés — including the communists to the left of him, wearing bright red face coverings — barracked him throughout. Unperturbed, his southern singing accent cut through the catcalls with repeated appeals to the ‘Republic’, ‘France’ and ‘unity’ in the face of the worst recession since world war two and projected autumn social unrest. The 55-year-old Castex is solid, reliable and a fixer. In this he resembles his 1976 predecessor Raymond Barre, of whom it was said, he was ‘a four-square mind in a round body’. Castex doesn’t have the rotundness of his predecessor or his insistence on the archaic use of the imperfect subjunctive, but he has his gravitas. This is what the presidential monarch Macron wanted. In appointing this career civil servant with no elective mandate, save that as mayor of the 6,000 strong sleepy southern town of Prades, Macron is taking the role of hyper-president to its limits. Castex’s statement then is no more than his master’s voice.

So what was in his statement? Other than splashing the cash, like all governments these days, there were two significant novelties. One novelty distanced the premier from his immediate predecessor, the otherwise capable and popular Edouard Philippe; the other is a harbinger of the heavy hand of Brussels in the internal politics of debt-laden southern Eurozone states, which France, with a rising 121 per cent debt to GDP ratio, is now bracketed with.

It is appropriate that Castex’s statement was made a day after France’s July 14 national holiday. Ever since the Great French Revolution there has been a tension at the heart of the French state between ‘localists’ and ‘centralists’; Girondins versus Jacobins, personified in that bloody revolutionary struggle between the dissolute but popular Danton and the austere and joyless Robespierre. The Jacobin centralizers triumphed to make France one of the world’s most centralized democracies. But the ‘localist’ urge was never vanquished.

Most recently it re-surfaced during the coronavirus epidemic. Macron attempted to have management of the crisis devolved to the departments and regions, but was blocked by his Jacobin prime minister Edouard Philippe. This in part explains his replacement by Castex, whose statement to the National Assembly was a veritable ode to localism, with ‘territoire’ repeated no less than 25 times, as the instrument of France’s response to the forthcoming economic and social upheaval. The irony is of course that for the first three years of his mandate President Macron ignored or blocked the local. The yellow vest movement emerged precisely as a result of his failure to take account of the views of the left-behinds in the provinces. But following his now multiple public recantations and promises of reinvention this is Macron’s new policy line to take him to the 2022 presidentials.

The second significant feature of Castex’s program was his forthright declaration that he would push forward the explosive reform of France’s generous pension system. In opposition to the French trade unions, the employers’ confederation and the public, and in the midst of a health crisis and forthcoming economic and social upheaval, Macron has decided to plough on with his unpopular pension reform that brought some of the biggest strikes since 1995 — the last time pension reform was attempted. Why envenom an already dire political situation? The answer lies in Castex’s subsequent remark that France would call on subsidies from Europe to confront its economic crisis. But Brussels’ pound of flesh for the €40 billion (£36 billion) earmarked for France is that Paris must reform its overgenerous social benefits so that the EU’s frugal northern taxpayers are not seen to be subsidizing French largesse, so that a French train driver’s retirement at 55 is not paid for by the Dutch train driver working to 65. France and the other ‘Club Med’ Eurozone debtor nations can expect to have far more policy dictated to them from Brussels because the Faustian pact they sealed on debt mutualization is redolent of Greece in 2011-12.

The self-proclaimed Gaullist Jean Castex has a formidable task ahead of him. He’s good, but is he that good? One is reminded of the highly popular French superhero cartoon character Superdupont. Son of the unknown soldier, ultrapatriotic, endowed with superpowers to protect his country against the ‘Anti-France’. Sporting his beret, blue cape and striped T-shirt our French hero swoops to encourage economic patriotism by consumption of large amounts of wine, camembert cheese and Gauloises cigarettes. Though loyal to French presidents and their obedience to the European Union Superdupont deep down favors a return to the French franc. Macron beware. In Castex could we see life imitating art?