Maria Butina: jailed for the crime of being Russian

She’s a political prisoner, caught up in the mess of the Mueller probe 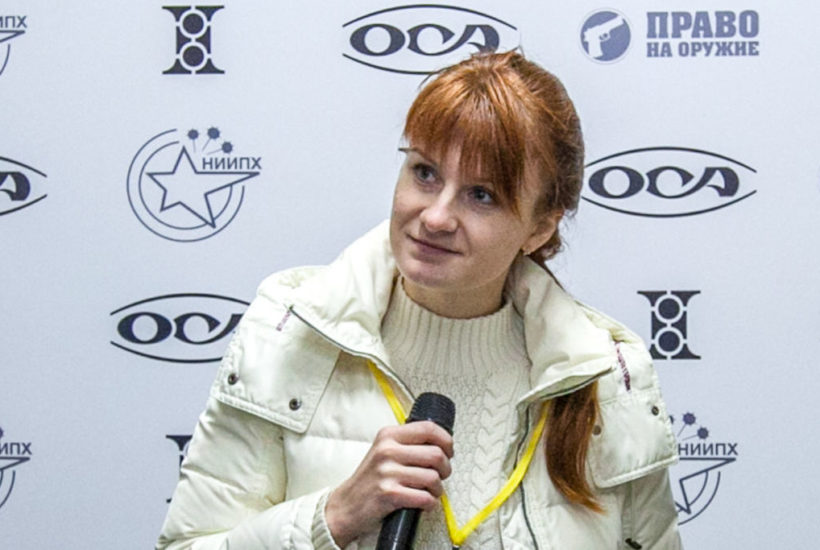 Maria Butina was not a Russian spy. She did not trade sex for influence. She had nothing to do with any clandestine espionage activity, nor did she ever hide her dealings with American political officials. In fact, she unabashedly loved America – perhaps to a fault. But she’s currently sitting in jail, and almost no one will say a word in her defense. The ordeal to which she’s been subjected is jaw-dropping for its recklessness and absurdity.

There’s so much that’s wrong with this case, it’s almost hard to know where to begin. Maybe the most obnoxious malfeasance was committed by moralizing media members who saw fit to cast judgment on her personal romantic decisions – as if that was ever remotely any of their business in the first place. Butina was in a long-term relationship with an older man, Paul Erickson, a fact automatically skewed as proof (somehow) that she was a transactional harlot. The sleazy hunch was never supported by actual facts, but that didn’t stop journalists from spewing the most malignant theories about what could have possibly possessed her to enter this consensual adult relationship. When it comes to the wider Trump-Russia saga, all ordinary journalistic and ethical standards are chucked decisively out the window.

That venality was particularly underscored by the glee with which pundits tarred Butina as a ‘honeypot’ and a ‘femme fatale,’ drawing on patently stereotypical notions of young Russian women. Again: not even the prosecutors who threw her in jail ultimately alleged she had engaged in any such conduct. They later had to retract their disgraceful accusations after being chastised by the presiding DC District Court judge, Tanya Chutkan, who remarked that it took her about five minutes to discern that the text message cited for the charge was being willfully distorted. The prosecutors had omitted an emoji from the message which made it obvious that she was joking with a friend.

However, Chutkan later infused the proceedings with insinuations that cast Butina as part of a broader, coordinated ‘Russian interference’ effort in relation to the 2016 election; something which had never even come close to being established by the facts in evidence. Chutkan opined from the bench at Butina’s sentencing hearing on April 26 that Butina’s conduct occurred ‘at a time when the Russian government was acting to interfere and affect the United States’s political and electoral process,’ and therefore the punishment meted out to her – 18 months in prison – was merited.

But Butina had absolutely nothing to do with hacked emails, dangerous Facebook memes, or any other facet of the prevailing ‘Russian interference’ narrative that has so dominated American political discourse for three years. Not only was she not a spy; virtually all her activities were the opposite of covert, seeing as she documented them copiously on social media (sometimes to the point of tedium). She didn’t ‘infiltrate’ any American political institutions, despite the false media accusations that she was somehow funneling Russian money through the NRA to surreptitiously fund Trump’s presidential campaign. Prosecutors never even alleged this; the journalists who hurled the smears, such as Rolling Stone’s Tim Dickinson, don’t seem to have revised their stories. Yes, Butina was interested in gun rights, having grown up in rural Siberia, and sought to link up her advocacy with US conservatives interested in the same issue. To achieve this goal, she engaged in what was essentially networking – as common in Washington, DC as breathing air. Now, given the precedent entrenched by her conviction, foreign nationals otherwise engaged in perfectly normal behavior will have the specter of an overzealous, politically-motivated prosecution hanging over their heads. Americans in foreign capitals will have good reason to fear reprisal on similarly fallacious grounds.

The primary means by which Butina sought to influence US political affairs was through convening ‘friendship dinners,’ an idea hatched not by any nefarious Russian operative, but an American, George O’Neill, an heir to the Rockefeller fortune. O’Neill was interested in improving US-Russia relations, and after a happenstance encounter with Butina proposed that she mount an effort to bring together American political figures for informal meetings in service of advancing that ambition. It was an idea perfectly suited to Butina’s interests; she wanted to pursue a career in international policy, which is why she was attending American University (and achieved near-perfect grades.) Her gun rights advocacy had already brought her in contact with a number of prominent conservatives, so she had the beginnings of a roster from which to draw. (On a related note, Putin has opposed gun liberalization initiatives in Russia, so the idea that Butina was aligned with his political agenda is also asinine.)

For the heinous crime of seeking to decrease tensions between two nuclear-armed powers, Butina was ultimately charged with violating 18 U.S. Code § 951 – not the Foreign Agents Registration Act (FARA) as is sometimes erroneously claimed. The decision to charge her with the former actually heightens the absurdity of the case, because that statute has typically been invoked only against foreign nationals engaged in outright espionage or other obviously illicit activity. For example, in 2008 a Chinese national pleaded guilty to a section 951 violation for providing a Chinese government official with classified US national security information. Butina never came anywhere near classified material. But power-hungry prosecutors opted to dramatically expand the range of applicable conduct under this statute so as to railroad Butina.

Operating as an ‘agent of a foreign government’ in the United States is not per se unlawful. For fun, try tallying up some time how many such ‘agents’ of the United Kingdom, Saudi Arabia, or Israel operate in Washington, D.C. Butina could have done something as trivially simple as send an email to the Attorney General’s office alerting them to her presence and she theoretically could have avoided this charge. However, she was of the mind that her conduct was so innocuous and unremarkable that registering in this manner never even occurred to her – she was a politically active graduate student, not a lobbyist or businessperson. But because the government was so hell-bent on finding someone who could be held up as a culprit in the ‘Russian interference’ melodrama, they radically stretched the bounds of the available statutes to nab her. Or in other words, because the political incentives for getting a scalp were so great – and law enforcement officials knew they could make a name for themselves by locating a salacious target – they marshalled their resources to come up with this joke of a prosecution.

So desperate was the federal law enforcement apparatus to scapegoat Butina for all Russia-related sins that Robert Mueller himself dispatched a team to interview her at Alexandria federal detention center on January 3, 2019 – the tail-end of the Special Counsel investigation, long after the failure to uncover any ‘collusion’ was clearly evident. Aaron Zelinksy, one of Mueller’s top prosecutors, pressed her on numerous investigative loose-ends, including the infamous brouhaha about supposed sinister changes to the 2016 Republican platform. Butina knew nothing about it, and Mueller concluded in his report that there was no reason to believe any attempt to ‘soften’ language on Ukraine was done at the behest of Putin or Trump. They also asked about her interactions with former Trump national security adviser J.D. Gordon, with whom Butina attended a Styx concert in October 2016. That was the extent of her supposed intelligence-gathering activities in relation to Gordon: rocking out to ‘Come Sail Away.’

Most bizarrely, Mueller’s interrogators questioned Butina about a New York Times article dated December 3, 2017, which reported that Butina’s boyfriend Paul Erickson had sent an email to an official in the Trump campaign, Rick Dearborn, suggesting that Putin wanted to meet with Trump. Butina said this was all puffery; like so much else in Trump-Russia lore, it owed to Erickson attempting to inflate his importance by hinting that he could facilitate a rendezvous with a prominent foreign leader. But considering she had no formal relationship with the Russian government, Butina had no means by which to set up any kind of meeting with Putin. Erickson was just blowing hot air. It was all nonsense.

More telling is that Mueller’s team, even at that late juncture, was so dead-set on finding a phantom ‘colluder’ that they trained their sights on Butina, who had already pleaded guilty – again, not for anything having to do with espionage or conspiracy, but for simply failing to register with the Attorney General. (Absent the registration issue, nothing Butina did was unto itself illegal.) And the source material cited by these intrepid prosecutors – armed with full subpoena power and the limitless finances of the US Treasury – was not the product of any intensive investigation, but the New York Times. Curious, don’t you think? Ultimately, there was no mention of Butina anywhere in the Mueller report.

She was recently hauled from the detention facility in Alexandria, where she had long been housed, to a county jail in Chickasha, Okla., far away from her lawyers. This came shortly after a jailhouse interview aired by NPR, in which correspondent Mary Louise Kelly preposterously asked Butina if she was a ‘spy’ – which, for the thousandth time, even the prosecutors who sent her to prison do not allege. It’s yet another indication that extreme measures are being taken to ensure her time in custody is as unpleasant as possible. Previously, Butina was consigned to months of solitary confinement, at which point she agreed to plead guilty to the registration offense. Under such duress, it’s no shock that she relented even in the face of charges that were so clearly spurious. But she’s found few defenders, not least among journalists who would ordinarily be horrified by the sexist slander to which she was subjected. Law enforcement officials conducted themselves abysmally, and journalists simply parroted what they were being fed.

As James Bamford, the legendary journalist who knows Butina’s case better than anyone recently told me, she is obviously a political prisoner. She reiterated in her NPR interview that she ‘loves this country,’ and that may well still be the cause. But Butina has seen the worst of America first hand: namely its egregious prosecutorial excesses and susceptibility to overwrought, irrational paranoia. She has acknowledged that her reputation and career prospects have been obliterated. False accusations that she seduced older men for political access will always be just one Google search away. The whole thing is incredibly disgusting. Her case will be looked back on as a grave example of how dramatically the media, federal law enforcement officials, and oblivious politicians have failed in this era.