She needed a rebrand. The mainstream press is doing it for her 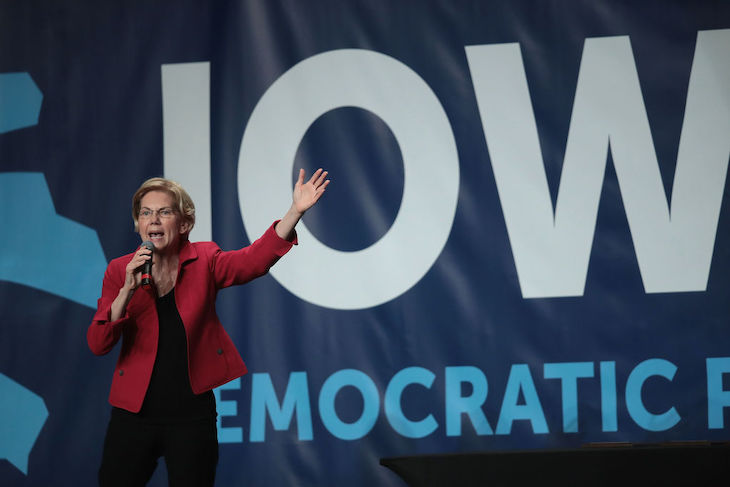 In recent weeks, Elizabeth Warren has emerged as the mainstream media’s favorite candidate – for now, at least.

Warren’s polling has largely been stagnant over the course of the race for the Democratic nomination, but you wouldn’t know it from the fawning coverage – coverage that just so happens to consistently echo the Warren campaign’s exact talking points. The New York Times asks ‘Elizabeth Warren is running an ideas-first campaign. Will it work?’ The Washington Post writes, ‘Warren’s nonstop ideas reshape the Democratic presidential race — and give her new momentum.’ Apparently, the ‘self-admitted policy wonk who has put her meaty policy prescriptions front and center in the campaign’ is also approaching ‘a breakout with black voters,’ and ‘she is very good on the stump.’

Should the mainstream press be quite so adoring of a political candidate? What’s concerning is that these articles – written by supposedly objective journalists – are stuffed to the brim with barely concealed Warren campaign talking points. ‘Ideas-first,’ ‘nonstop ideas’, ‘meaty policy prescriptions’ – most campaigns can’t buy coverage like that. Either directly or indirectly, the same writers and reporters whose job it is to cover and analyze the 2020 race objectively are ingesting the Warren campaign’s messaging and regurgitating it verbatim in the pages of their publications.

In case it needs saying: a supposedly skeptical, adversarial media should not be in the business of openly helping political candidates rebrand themselves.

Perhaps most maddening of all is the fact that this particular rebranding initiative is so ridiculous. Despite the press’s fixation on Warren’s ‘plans for that,’ neither voters nor candidates put any real stock in the granular details of presidential campaigns’ policy proposals. Why? Because when it comes to picking a leader, voters are far more interested in authenticity, strength, and broad ideological brushstrokes than so-called ‘meaty policy prescriptions,’ and both voters and candidates know that ‘plans’ such as Warren’s have zero chance of getting through Congress. They know that they will be discarded by the candidate the second they become politically inconvenient, and they know that they aren’t ‘plans’ so much as they’re really just two-page white-papers influenced by DC think tanks and cooked up by a handful of staffers for the sole purpose of impressing oblivious reporters. Hillary Clinton was often praised in the media for detailed policy plans. Look how that worked out.

But the Warren PR machine is clearly working, at least for now. And why not? It appears that the Democrats’ early frontrunners are in a slump: in recent weeks, Bernie Sanders seems to have found his polling floor and Joe Biden has begun his post-announcement descent back down to earth. What better time for the media to pluck a struggling campaign from obscurity, lavish her in eerily specific praise, and give her new political life while republishing her exact talking points right in the headlines?

By enlisting an army of reporters into doing their job for them, Warren’s communications team can be proud of themselves. Yet the media should be ashamed of how easily they’ve been duped and manipulated into becoming an extension of a struggling presidential campaign. The voters, readers and viewers deserve better.