The mighty cucks: why do Trump loyalists want other men to make love to their wives?

Inside the weird world of cucking 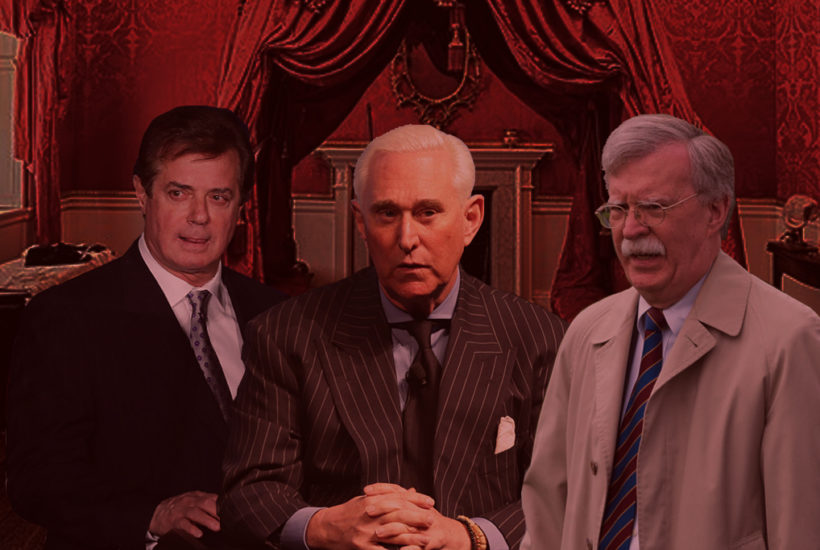 Remember when the GOP used to pride itself on being the party of family values? Well, they still do, at least on their official platform: ‘When American families flourish, so too does our country. And every honest American knows that a strong, traditional marriage lies at the heart of each great family.’

But it’s hard to present yourself as the party of marriage and familial stability when the Republican president and so many of his entourage have had such complicated love lives. And it gets even harder when several figures in the Trump orbit have had a penchant for having other men make love to their wives, while they watch.

This is a practice well-established among in seedier worlds than Spectator USA readers inhabit. It is known as ‘cucking’ — and some of Trump’s inner circle seem to be enthusiastic practitioners.

Cockburn reported last year on claims that former campaign manager and current convict Paul Manafort had encouraged his wife to participate in group sex with a series of men as he filmed it, according to leaked text messages between the Manafort daughters.

Another victim of the Mueller inquiry, Trump campaign adviser Roger Stone, was the subject of a 1996 National Enquirer story reporting that he and his wife posted an ad in Local Swing Fever magazine that read: ‘Hot, insatiable lady and her handsome body builder husband, experienced swingers, seek similar couples or exceptional muscular . . . single men.’ Stone confessed to the New Yorker’s Jeffrey Toobin 10 years ago that it was genuine, saying ‘I’m not guilty of hypocrisy. I’m a libertarian and a libertine.’

Which brings us to national security adviser John Bolton, who was under consideration for a UN role in the second Bush dynasty, First Amendment activist Larry Flynt sought to confirm allegations about the breakdown of his first marriage to Christina Bolton. Flynt’s 2005 statement alleged that ‘Mr Bolton’s first wife, Christina Bolton, was forced to engage in group sex…Mr Flynt has obtained information from numerous sources that Mr Bolton participated in paid visits to Plato’s Retreat, the popular swingers club that operated in New York City in the late 1970s and early 1980s.’ Press accounts at the time indicate that Flynt’s allegations were not taken that seriously but Bolton has never issued a denial.

‘Dr 36’ styles himself as a ‘cuckolding consultant’: he tutors men online who want to talk their wives into trying cuckoldry. ‘Cuckolds feel alive by embracing the entirety of the spectrum that is human existence,’ he told Cockburn.

Stefani Goerlich is a sex therapist from Detroit. ‘Cuckolds are not aroused necessarily by the idea of their partner having sex with another man so much as they are by the messaging around that sexual encounter: that the other man is providing a degree of pleasure that they can not, that their partner desires the other man more, and that they are inferior to the two who are having sex,’ she explained.

‘The men that seek out cuckolding scenarios are looking for an experience that will make them feel unworthy, incapable of pleasing their partner, and extremely humiliated,’ said Goerlich. This checks out: Cockburn would think anyone working for Trump was seeking feelings of unworthiness, incapability of pleasing and extreme humiliation.

Is there a relationship between working for the world’s most powerful man and this particular kink?

‘Dr 36’ seems to think so: ‘Men in positions of power not only become weary and burned out from the constant demands they feel upon them (demands which they become “addicted” to needing to feel in order to feel alive and successful), but they also need more mental stimulation than the average man in order to feel anything at all.’

‘Many people who hold positions of power in their professional lives get tired of constantly having to be “in charge” and may turn to some form of sexual submission in order to feel powerless and give up that sense of control,’ said Goerlich. Running a Presidential campaign or meeting with Middle East dignitaries could certainly get tiring…

It’s not all about degradation and worthlessness though: there’s another reason why cuckoldry may have its appeals to denizens of Trumpworld. ‘To be cuckolded is to feel alive,’ says ‘Dr 36’ ‘since engaging in cuckolding causes a man to want his partner again with all the intensified feelings about risk and possible denial.’ Maybe that’s the big secret here: the Trump cucks are truly alive, seizing each day as it comes, utterly unafraid of taking risks. Though perhaps some of them (certainly Manafort) may look back and wish they’d been more careful?