In his first speech, the Secretary of State seemed more confused than competent. 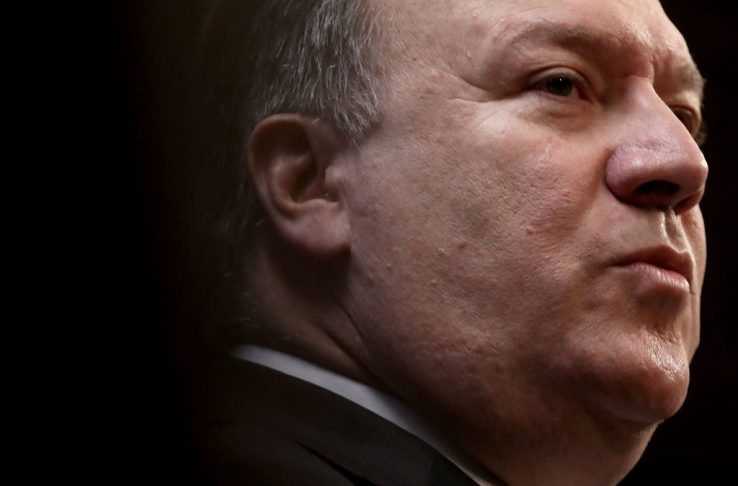 Mike Pompeo, just over three weeks into the job, today gave his first major speech as secretary of state. “Bold, concise, unambiguous.” That’s how the president of the Heritage Foundation described “After the Deal: A New Iran Strategy,” which Pompeo delivered at the Heritage Foundation. That’s not quite how I would summarize it. He was certainly bold at times, for example asking, as the 40th anniversary of the Islamic Revolution approaches, “What has the Iranian Revolution given to the Iranian people?” In a jab at former president Barack Obama and his own predecessor John Kerry, Pompeo noted, “Unlike the previous administration, we are looking for outcomes that benefit the Iranian people, not just the regime.”

But Pompeo’s address, which aimed to spell out his administration’s Iran strategy two weeks after it withdrew the United States from the Joint Comprehensive Plan of Action nuclear deal, wasn’t “concise” or “unambiguous,” not by any stretch. The secretary of state, in fact, displayed a confused—if not on occasion completely erroneous—understanding of the basic political structure of the regime that he spent his speech assailing.

Early in his speech, Pompeo said: “Today, we ask the Iranian people: Is this what you want your country to be known for, for being a co-conspirator with Hezbollah, Hamas, the Taliban, and al-Qaeda?” Unfortunately for them, the Iranian people don’t have a say in such decisions. And the protests that have been roiling the country since late December indicate that they very much reject the regime’s support of terrorism and foreign adventurism. Chants that the protesters across Iran have used include “Death to Hezbollah,” “Leave Syria alone, think about us instead,” and “Forget about Gaza and Lebanon; I’ll sacrifice my life for Iran.”

Pompeo directly addressed Iranians again later in his speech, with “an additional point for the Iranian people to ponder,” talking about Iranian president Hassan Rouhani and foreign minister Javad Zarif: “Rouhani and Zarif are your elected leaders. Are they not the most responsible for your economic struggles? Are these two not responsible for wasting Iranian lives throughout the Middle East? It’s worth the Iranian people considering.”

I’m not Iranian, but I have a question for Mike Pompeo: Does the secretary of state know that Iranian elections are not free and fair? No one can run for office in Iran without the approval of Supreme Leader Ali Khamenei. Candidates are vetted by the Guardian Council, whose members are appointed by Khamenei and the chief justice, who is himself appointed by Khamenei. Iranians aren’t allowed to vote for anyone who questions the foundation of the theocratic regime.

Elsewhere in his talk, Pompeo did indicate some understanding of how disagreement is dealt with in the Islamic Republic. “The hard grip of repression is all that millions of Iranians have ever known,” he said, and he also mentioned the “well-documented terror and torture that the regime has inflicted for decades on those who dissent from the regime’s ideology.”

But during the short question-and-answer period with the think tank’s president that followed his speech, Pompeo again implied that the totalitarian government of Iran has been sanctioned by the citizens suffering under it. “You’ve laid out a very, very bold plan this morning. Do you have a timeframe for getting all this done?” Kay Coles James asked him. Pompeo responded that many federal departments are involved in carrying out the administration’s Iran strategy. “I can’t put a timeline on it. But at the end of the day, the Iranian people will decide the timeline. At the end of the day, the Iranian people will get to make a choice about their leadership. If they make the decision quickly, that would be wonderful. If they choose not to do so, we will stay hard at this until we achieve the outcomes that I set forward today.”

Either Mike Pompeo doesn’t know the Iranian people have no say in the decisions of their government—in fact, criticizing the supreme leader or his government can get you imprisoned, tortured, and sometimes executed—or he’s urging the Iranian people to overthrow their regime, in a rather roundabout way.

Now that—encouraging Iran’s freedom fighters to reclaim their country—would be a bold move. But statements in the rest of Pompeo’s speech make it seem more likely that, as I’ve argued before, he simply doesn’t have a good-enough grasp of the issues he’s bringing into his portfolio. Pompeo previously said he’s convinced that North Korea’s despot Kim Jong-un shares the objectives of the American people. In his speech today, he said, “We hope, indeed we expect, that the Iranian regime will come to its senses and support—not suppress—the aspirations of its own citizens.” That regime only survives because it suppresses its own people. That’s why the regime has been cracking down so brutally on protesters, with more than 50 of them killed since December. What the Iranian people want—as Pompeo put it in his speech, “a simple life with jobs and opportunity and liberty”—goes against the interests of the clerics who run the country. If Donald Trump’s new secretary of state believes this regime is capable of change that could only come with its collapse, he might not be so different from his predecessor John Kerry after all.