A night in an American riot 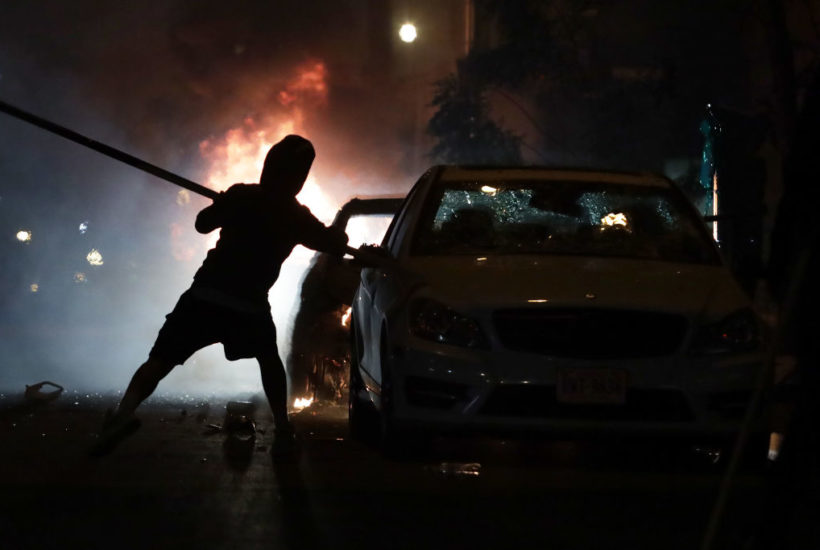 A man vandalizes a vehicle in Washington, DC (Getty)

Race riots have gripped the nation over the past week, eclipsing the peaceful protesters demanding justice for the death of George Floyd. Violent rioters — including members of antifa — have laid waste to virtually every American city. As darkness descends on an American city, what is it like to be on the front lines of the riots?

Reporters who set out to document the chaos described to The Spectator how the mood shifted as the sun went down. Rioters felt empowered under the cover of darkness and set out to fight, destroy, and steal.

Krista Oliver, who covered the weekend-long protests in Washington, DC for the Daily Caller recalled ‘how scary these riots are getting as the night progresses.’

‘At all moments you have to be on high alert because you never know who may know you, if people have an issue with you being there, or if police are charging,’ she said.

Another Daily Caller reporter in DC, Shelby Talcott, noticed the same phenomenon: ‘Whether the escalation came from protesters or police officers, I felt like as the night went on tensions continued to rise. In one moment, the crowd would be protesting fairly calmly and in the next, a firecracker would be thrown at a line of officers or tear gas would be thrown into the crowd.’

Julio Rosas, a senior writer at Townhall, has spent the last several days in Minneapolis. He explained that even criminal looters were relatively ordered until nighttime. They waltzed in and out of stores, taking whatever they wanted without getting into any scrapes. However, sunset changed everything: ‘The peaceful protesters left, and that’s when the rioters, anarchists…that’s when they all came in, because they wanted to have fights with cops. And they did.’

Rioters trapped police officers in the Third Precinct in Minneapolis and attempted to light the building on fire. The officers had no choice but to abandon the building. In Rosas’s opinion, the police ‘could have held it if reinforcements were sent. Reinforcements were not sent. There was no National Guard, there were no extra cops.’

Rosas, who has covered the white nationalist rally in Charlottesville, protests at the RNC and DNC in 2016, and antifa riots in Portland and Washington, DC, said he had never seen police completely desert an area like they did in Minneapolis.

‘Because the police did that, rioters felt emboldened to go to another precinct to try and do the same thing again,’ he explained, noting that rioters attempted to take the Fifth Precinct the following evening. ‘It was crazy. It was anarchy.’

Rosas was forced to cut short his coverage on Friday night after taking a rubber bullet to the abdomen. He went to a hospital to ensure he did not have any internal injuries. After getting the all clear, Rosas spent two more days on the ground in Minneapolis before hopping on a flight to Los Angeles to cover the riots there.

The lack of police presence was a theme across several of the protest sites. Even when police did show up to try to shut down rioting and looting, they often found themselves outnumbered. Nashville police Chief Steve Anderson said his force doubled their presence in the city but was still unable to handle the crowds. In Las Vegas, a protester shot a police officer in the head.

Citizens began to take matters into their own hands. One block away from the Minneapolis Third Precinct, private citizens joined forces to protect themselves from looters and rioters. After a meeting earlier that day, one group of neighbors decided to build barricades and prevent rioters from entering their block.

‘I never want to hear the phrase “no one needs an AR-15” ever again,’ Rosas asserted.

Adding to the atmosphere of confusion at the riots was the dust and debris in the air from the destroyed buildings, smoke from fires, and tear gas and flash-bangs deployed by police to disperse the crowds.

Eric Smith, a peaceful protester and student at the George Washington University Law School, described the scene at Lafayette Square in Washington, DC as ‘visceral’. The neighborhood near the White House was dominated by graffiti and smashed windows. Smith said he and his boyfriend were hit with tear gas and vainly tried to fan their protest signs to clear the air. Another protester pulled the pair aside and washed out their eyes as they ‘coughed and let the burning in our lungs subside’.

Oliver said she was coated in soot and ‘smelled like filth’ at the end of her night of reporting, explaining that the air ‘smells like marijuana, smoke from the fires, and you are choking on the mace, pepper spray, and tear gas.’

‘Even if you weren’t in the immediate area of where the tear gas went off, it permeated through the air to the point where there were times I literally could not see for a few minutes,’ Talcott confirmed.

Throughout the night, firecrackers thrown by the rioters would explode near the police officers, earning the response of more tear gas. Talcott recalled the sound of screaming — in protest, in pain, in fear. Overall, it was a ‘chaotic, angry anarchy’.

Rosas tried to filter out the debris by wearing an N95 mask, the PPE that nurses were begging for just a couple of months ago when treating coronavirus victims. Now, the masks are being used not just to keep out a virus, but to stop the inhalation of smoke and dust and counter the constant coughing from the riot scenes.

For many, the evident divides — between white people and black people, between law enforcement and civilians, between rioters and peaceful protesters — were even more palpable than the sensory onslaught.

‘Many protesters and rioters do not welcome white people or press at all. The race divide is apparent. I did not talk to anyone. My priority was laying low and not being recognizable for fear of being assaulted,’ Oliver said.

Smith was taken aback by ‘both by the silence and the aggression of the police’, who were suited up in heavy armor, standing stoically and not interacting with the crowd, save the occasional round of tear gas or flash-bangs.

Many of these witnesses said that they are still sorting through the emotions of the past weekend. None of them had experienced anything quite like these riots and protests.