Mitt Romney called. He wants his foreign policy back

China, not Russia, the biggest threat 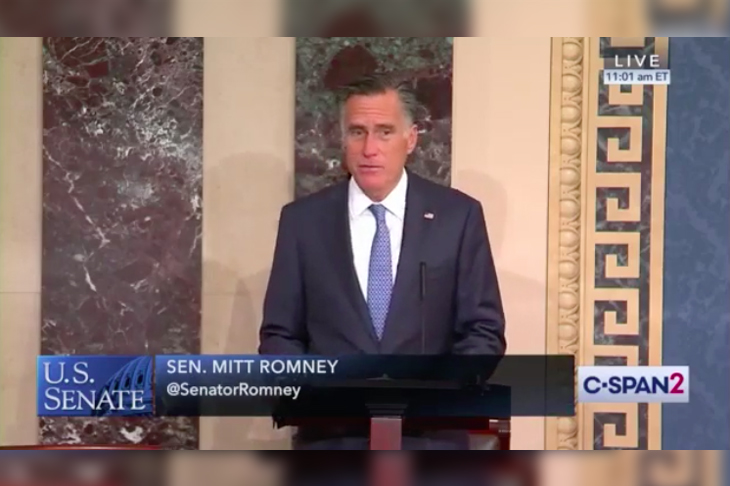 ‘Eight years ago, I argued that Russia was our number one geopolitical adversary,’ Mitt Romney said this week in his maiden Senate speech. And who could forget Barack Obama’s burn in the televised presidential debate of 2011?

‘The 1980s are now calling to ask for their foreign policy back,’ Obama said. Four years later, with the US and Russia at loggerheads and Russian ‘collusion’ a theme of the 2016 election, Romney was vindicated. But it was Obama who was the outgoing president.

On the Senate floor on Monday, Romney took a humble moment to marvel in his own prescience — a prescience several years behind that of exiled magus Steve Bannon — then made a prediction about which state is replacing Russia as the US’s strategic challenger: ‘Today, China is poised to assume that distinction.’

Not that the Utah senator dismisses Russia as a threat. ‘Russia continues its malign efforts,’ said Romney, reciting a litany of Russian misdeeds that included treaty violations, territorial incursions, election and media meddling, and ‘promoting authoritarianism’. But Russia, Romney sagely noted, is in decline. Though the symptoms of Russia’s ‘inevitable desperation’ will include further ‘aberrant conduct’, China, Romney argues, is the bigger long-term threat.

‘Unlike Russia, China is on a rising path,’ said Romney. ‘When it was admitted to the World Trade Organization, the expectation was that China would embrace the rules of the global order.’ Instead, said the sober Senator, Putin has done the opposite, and flouted the global rules of free-and-fair competition. China has also disregarded the global political order, protecting, Romney said, ‘brutal dictators, like Kim Jong-un and Nicolás Maduro.’

On the 30th anniversary of the Tiananmen Square Massacre, Romney wondered whether China ‘might someday experience a discontinuity or another uprising, that will change its course’. But he sees that kind of reversal as unlikely. Barring internal disorder, China, with a population four times that of the United States, will continue its economic expansion and eventually ‘dwarf’ the US economy. And as economic advantage entails military advantage, Romney warned, China’s military ‘could even pass by ours as well’.

‘It’s possible that freedom itself would be in jeopardy,’ warned the senator. ‘If we fail to act now, that possibility may become a reality.’ Paradoxically, Romney described the rise of China as all but inevitable, but then suggested how the United States might forestall it. The United States has two imperatives, he said: ‘First, strengthen ourselves, and second, stop China’s predation.’

Strengthening the US means not just a military buildup, but also a diplomatic one. The population imbalance between the US and China means that the US must join ‘our economic and military might with that of other free nations’. Speaking days before the 75th anniversary of the D-Day landings, Romney identified alliances as ‘absolutely essential to America’s security… and the cause of freedom’. In a thinly-veiled rebuke of Donald Trump, Romney declared that ‘we need to hold our friends closer, not neglect them or drive them away,’ adding that ‘a strong NATO, a stronger Europe’ are in the United States’s best interest.

Romney also criticized the Trump administration’s immigration policies for damaging innovation, which Romney called the key field of economic competition between the two superpowers: ‘America is a magnet for the world’s best-and-brightest; they want to come here, not to China.’ Immigration policies must ‘keep attracting the world’s best minds to America.’ Romney did, however, credit trump for confronting China on trade. ‘The president is right to use tariffs to crack down on China’s theft of our intellectual property,’ he said. ‘Too often we ignore China’s aggression, genuflecting before the throne of free markets, but you don’t have a free-market if the biggest player is allowed to cheat.’

Cautious not to get ahead of the emerging wisdom in Washington, Romney described China as ‘not yet a geopolitical foe’ — not unlike his nemesis Obama casting post-Mubarak Egypt in the new geopolitical category of frenemy. But China’s actions over the last few years have brought it ‘right up to that line’. And the American response has been ‘ad hoc or short-term or piecemeal’. It’s time, Romney said, for ‘a comprehensive strategy to meet the challenge of an ambitious and increasingly hostile China’.

That strategy requires a ‘third imperative,’ uniting the American people against China ‘to the greatest extent possible’. Any kind of unity will be challenging, but unity, he noted, is enforced by external threats if it cannot be extracted from domestic divisions.

‘Don’t expect to see the Chinese president pound his shoe on the counter or shout that he’s going to bury us,’ Romney warned. ‘China intends to overcome us like the cook that kills the frog in a pot of boiling water, smiling and cajoling as it slowly turns up the military and economic heat.’