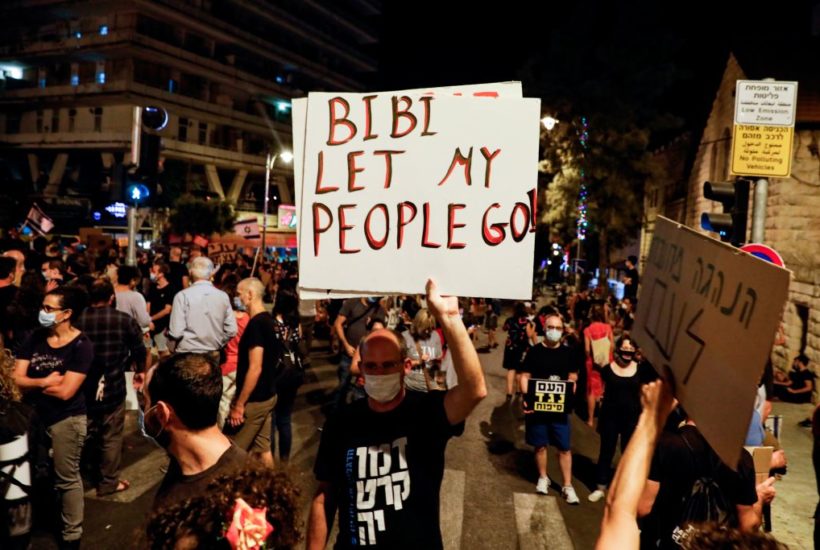 The Israeli prime minister’s residence in Jerusalem is located in a leafy neighbourhood of stately villas, many of which date from the era of the British mandate and combine Bauhaus and Arabic architectural styles. Over the last few weeks the neighborhood has come to resemble more of a protest camp, festooned with a mix of Israeli and black flags and banners calling Prime Minister Benjamin Netanyahu a dictator. Amid the COVID crisis, with Israel suffering a second wave of the virus, the protests are a unique spectacle that could grow into a wider movement.

It is a rare sustained protest against more than 10 years of rule by the same man, during a historic period of relative calm and economic growth in Israeli history. Netanyahu is Israel’s political master, surviving three elections over the last year-and-a-half by doggedly clinging to power, despite a corruption trial that began this year and numerous political enemies on the far-left and far-right. He survives because he has maneuvered all his rivals to either rely on him in coalition governments, or he has sidelined them to make the appear as part of the fringe so that he can dominate the center.

The protesters who have gathered over the last week are largely leaderless. They appear more like the kinds of outpouring of frustration and anger we have seen in the US during the Black Lives Matter protests and the subsequent riots in Portland against the Trump administration. The mingling crowds, some playing music and others fighting police water cannons, also feel like the kinds of protests that have rocked France, Chile, Hong Kong, combining youth anger with elements of the left and other forces. It’s a complex mix. Israelis were a bit shocked that one of the protesters climbed atop a giant menorah near Israel’s parliament and took off her shirt. It reminds some of the nude protester who posed in front of police in Portland.

The protesters in Jerusalem hold signs attacking Netanyahu for his alleged crimes and accuse him of creating an atmosphere of dictatorship. They excoriate him for eroding trust in media, and for his party’s attacks on the judicial system. In addition, many are angry over the government’s mishandling of the COVID crisis, in which Israel went from being one of the success stories of low number of cases, to thousands of new cases a day. With unemployment in double digits and concern over war with Iranian-backed Hezbollah in Lebanon, the protests are adding to endless problems the government faces.

Netanyahu needn’t be worried yet. Recent polls show his Likud party grabbing 31 of the 120 seats in parliament. This doesn’t look like much, but Likud has governed for a decade with similar numbers of seats in a coalition with a plethora of small right wing and religious parties. Netanyahu’s closest rival, the Yesh Atid party, run by a former media star, gets only 19 seats. The math just doesn’t add up to remove Israel’s leader. His adversaries tried in three elections and couldn’t form a government. Netanyahu has discovered the secret to running Israeli democracy is to just have endless elections — his enemies can’t form a coalition because they all seem to dislike each other more than they dislike him. While Netanyahu may face protests from urban crowds of young people, his working-class voters who make up the ranks of Likud, haven’t deserted him yet.

The protests are a manifestation of a portion of society that is angry at the ossifying decade-long rule of one man, combined with wanting something to do during the repression-inducing COVID uncertainty that means no one can travel abroad and employment opportunities are vanishing. Israel feels more under siege than usual, isolated from tourism and travel. With Iranian threats growing on the northern border and a health crises, it’s possible the protests might light a spark of wider social anger over the government’s mishandling of affairs. It’s more likely, given Israel’s long track record of social solidarity and soldiering on though crises, that it’s a way for a few people to let off steam.