The late great American astronomer Leslie Peltier was onto something 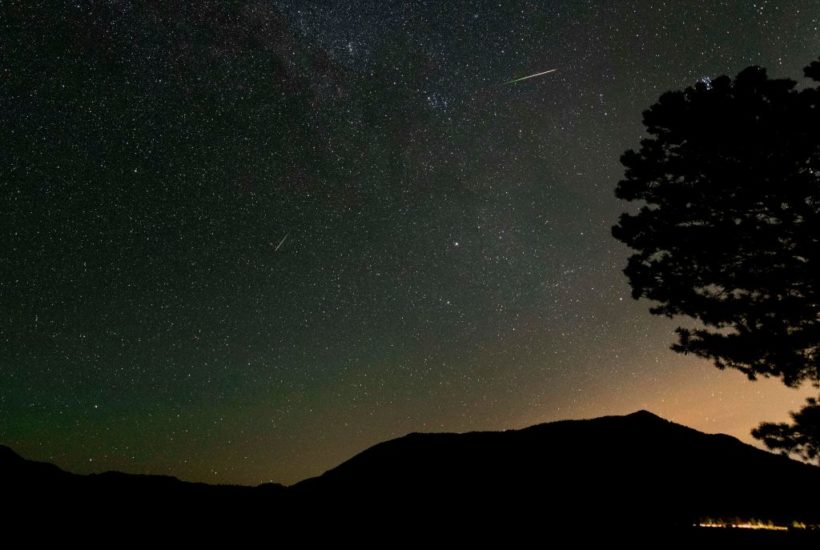 This article was originally published in The Spectator’s July 2020 US edition. Subscribe here to get yours

Paranoia will destroy ya, as the great Muswell Hillbilly Ray Davies sang, but so can blithe unconcern, and damned if I can find the equipoise.

Case in point: a saintly friend of my mother’s distributed masks to those of us who had been engaging in acts of unprotected grocery shopping. Mine bore the emblem of the Buffalo Bills. (I’m surprised some underemployed NFL patent attorney isn’t hounding the mask-maker as I type.)

I dropped by to see my parents en route to the grocer’s. ‘I dunno,’ I said to my father. ‘A mask. Whaddayou think?’

Well, I’ve worn it a handful of times since in the grocery store, telling myself that I’m being a good neighbor, considerate of the concerns of others, but boy do I ever feel like a candy ass.

The self-directed opprobrium has had the pleasant consequence, however, of spurring me to drag my long-neglected telescope into the backyard on clear nights. I bought this eight-inch Dobsonian reflector 20 years ago, when an unexpectedly large check arrived from the Independent for a profile I had written of Al Gore. I decided, in candy-ass terms, that it was me-time.

(How I used to enjoy getting those occasional mailed payments from the UK. My local bank couldn’t deal with pounds, so I had to drive an hour to the money-changers in Rochester, feeling myself quite the boulevardier as I flaunted my exotic document with all the clueless hauteur of Steve Martin in The Jerk, boasting to a bank officer that he was in possession of a cashier’s check.)

John Dobson, eponym of this telescope, was a practical-minded Hindu monk who designed an instrument much superior in price and ease of movement to other fairly large scopes. He used to set up on the sidewalks of San Francisco and invite passersby to have a look at the heavens.

Dobson was an evangelist for the pure and simple pleasure of gazing at the night sky, an experience that has never been rendered more effectively and movingly than in Starlight Nights (1965), memoir of the late Leslie Peltier, by consensus ‘the world’s greatest nonprofessional astronomer’, as Harvard’s Harlow Shapley called him.

Peltier was a classic American autodidact who spent his entire life in the small town of Delphos, Ohio. He quit high school during World War I to help with the family farm and then made a career as a toy and furniture designer for a Delphos company. He also taught himself astrography, as every smudge and pinprick in the welkin was his friend and familiar. His precocious observations of variable stars earned him a reputation such that Princeton, Harvard and other institutions loaned him telescopes. Leslie and his father built an observatory in the Peltier family’s cow pasture, from which bucolic fastness he would discover a dozen comets.

Peltier developed a felicitous, understatedly humorous writing style, most memorably displayed in his account of his first comet discovery. After spotting a ‘small round fuzzy something’ in the constellation Bootes, he pedaled his bicycle furiously for miles in the dead of night to reach the Western Union signal tower, where a bemused telegraph operator — ‘This some sorta code?’ — transmitted his message to the Harvard College Observatory. When, days later, Leslie received confirmation of his discovery, he proudly carved the new comet’s name — PELTIER 1925 — into his telescope’s mahogany tube.

As I was rereading Starlight Nights under lockdown, a promising newly discovered Comet, ATLAS/2019, was disintegrating without ever attaining naked-eye visibility. ATLAS, alas, was not the surname of some plucky amateur in the sticks. Rather, it denoted the automated Asteroid Terrestrial- impact Last Alert System survey, for most comets today bear the mechanical acronyms of the technologies which have detected them. Yawn.

Leslie Peltier, protective of his ‘firm friend’ the Moon, was a critic of the military- industrial-complex-driven US space program. In the same week that Comet ATLAS dimmed, President Trump signed an executive order encouraging the commercial exploitation, i.e. mining, of the Moon. Such ventures are entertaining enough in the 1950s Robert Heinlein science-fiction novels for juveniles, but I’ll take my stand with Walt Whitman:

‘When I heard the learn’d astronomer,
When the proofs, the figures, were ranged in columns before me,
When I was shown the charts and diagrams, to add, divide, and measure them,
When I sitting heard the astronomer where he lectured with much applause in the lecture-room,
How soon unaccountable I became tired and sick,
Till rising and gliding out I wander’d off by myself,
In the mystical moist night-air, and from time to time,
Look’d up in perfect silence at the stars.’

That’s what I’m doing tonight. And in doing so I will touch my face as often as I please.

This article was originally published in The Spectator’s July 2020 US edition. Subscribe here to get yours