Godfrey clashes with the Brexit protesters 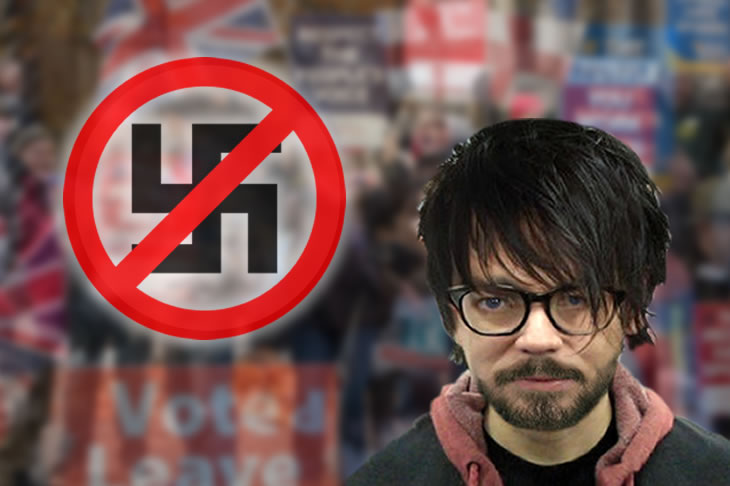 Yesterday morning while visiting friends in London, I decided to take a stroll down to Pret A Manger for a spinach and avocado protein pot. On the way there, I found myself in the middle of some kind of demonstration. An intimidating gang of white men (along with a few women who had no doubt been threatened by their violent beer-swilling husbands into being there, and some people of color who had probably wandered into the demonstration by accident) were standing outside Burger King shouting disgusting pro-Brexit slogans, demanding ‘democracy’ and holding up signs expressing the need to ‘GET ON WITH IT’. These men were obviously white supremacists or why else would they be so vocal in their support of Brexit?

As a social justice warrior with a superior moral code to these ignorant oafs, I courageously approached them. As I drew closer, they were literally standing barely 30 feet away from me and showing no signs of backing down. ‘What do you think you are doing?!’ I called to the one nearest me. ‘Peaceful protest mate,’ he spluttered, working-classly, ‘you wanna sign our petition?’ he had the GALL to enquire violently with his dirty mouth. ‘I will do no such thing!’ I shouted at him, bravely, ‘In fact I’m calling the police right now to have you removed from here!’ I took out my iPhone and backed off a few more yards just in case he decided to steal it. ‘Why you callin’ the police?’ he had the NERVE to ask thuggishly, ‘we ain’t dun nuffin’, we’re just standin’ ‘ere!’

I edged away even more because I have heard tell the working class are easily startled and prone to emotional outbursts when challenged in a progressive manner. Their small brains are ill-suited for understanding complex emotional issues and they have absolutely no respect for multi-layered minorities such as me. Nevertheless, I took a few more steps backwards and boldly informed him, loudly from the other side of the road, that the very fact a group of white men were standing together in the street was reason enough, and that I was currently campaigning for segregation laws to be put in place. I also told him that Brexit needs to be stopped and that in my opinion, him and his gammon*-faced Nazi friends need to be imprisoned until they can learn to not offend people by their very presence, or at the very least, should be made to wear an armband of some kind. *(Gammon is a term used in the UK to describe white men who appear to think free speech is important and get very angry and red-faced when you calmly and reasonably suggest that it should be strictly regulated).

What he said next utterly floored me. ‘What are you then? Some kind of fascist?’ My stomach lurched as the poison of his words were digested. I was very nearly sick. Fascist? Me?! How DARE this vile uneducated brute accuse ME, Godfrey Elfwick of being a FASCIST! ‘POLICE! POLICE!’ I yelled, ‘HELP, HELP! Come and arrest these intolerant bigots!’ At this, the vile Neanderthals all began to laugh. Cruelly taunting me with cries of ‘Oi, mate why are you pissing yourself?’ and ‘Are you actually crying?’ I valiantly ran away from them, secure in the knowledge I had given them a scare and perhaps they might think twice before attempting to slander me or any other brave activist in the future.

When I returned home, I called the police and made an official complaint, requesting that they make it illegal for intolerant gammon-faced white supremacist Nazis to call innocent people fascists. I also enquired about the possibility of having them all interred in camps but at that point there must have been a connection problem because the line went dead.