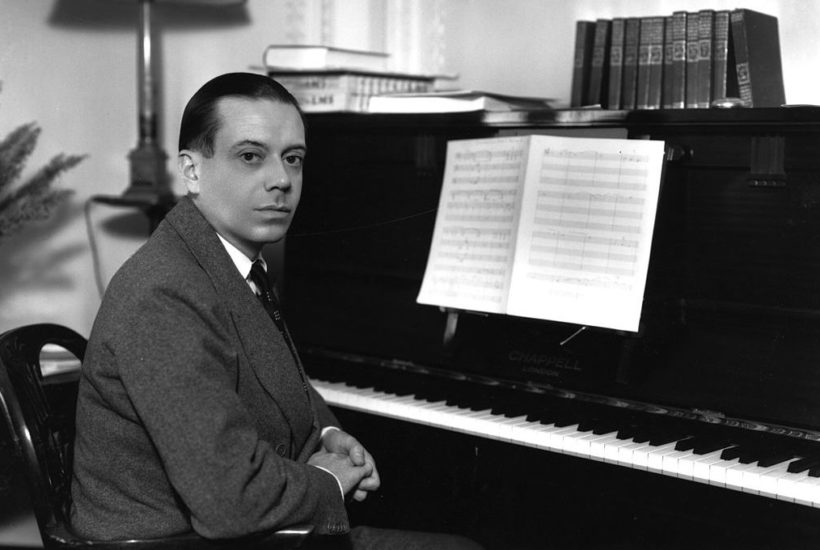 In the age of Love Island, what wouldn’t you give for a retooled version of ‘Anything Goes’? Cole Porter, 1933

‘In olden days, a glimpse of stocking / Was looked on as something shocking,’ caroled the company of Cole Porter’s 1934 Broadway smash Anything Goes. When the musical opened at London’s Palace Theatre in 1935, the lyric to ‘Anything Goes’ was altered to suit local conditions. Out went Porter’s lines about Rockefeller and Max Gordon. In came a couple of couplets on current parliamentary antics: ‘When in the House our legislators / Are calling each other, “Traitors” / And “So and So’s” / Anything Goes.’

Eighty-five years on, in the age of Love Island, what wouldn’t you give for a retooled version of ‘Anything Goes’? Let us note in passing that ‘goes’ rhymes with ‘Bercow’s’, as in the outgoing and meddlesome Speaker of the House of Commons, and that Porter, ears ever pricked for a double entendre, would have had a ball with Boris Johnson’s last name.

Those amended London lyrics were the work of one P.G. Wodehouse. It’s a measure of the level of Porter’s humor that it was Jeeves’s man who was drafted in for the translation. Many a Broadway lyricist could crack wise, but none, not even Lorenz Hart, had wit to burn. Porter did. He could slot gags into the most torrid and tremulous of numbers. Hart might conceivably have come up with the lines in ‘All of You’ about how the singer loves ‘The eyes, the arms, the mouth of you / The north, east, west and the south of you’. But Hart would never have thought of working them into a straight love song.

By accident or design, this technique ensured that Porter got away with things other writers might not have done. Though the censors insisted that the reference to his beloved ‘snow’ be removed from ‘I Get a Kick Out of You’ — ‘Some get a kick from cocaine’ became the rather effete ‘Some like perfume from Spain’ — they let the followup lines pass: ‘I’m sure that if / I took even one sniff / It would bore me terrif- / ically too.’ And while the blue-pencil brigade excised any mention of ‘Marilyn’s behind’ from ‘Stereophonic Sound’, they left intact the salty line about the female singer’s having once ‘licked an anchovee’.

Both those stories are taken from The Letters of Cole Porter, but don’t go getting the idea the book has a laugh per page. Suavely edited by Cliff Eisen and Dominic McHugh, this hefty collection is a lot less fun than Porter fans might expect. For one thing, it’s full of tales of his (generally bad) and his wife’s (generally terrible) health. For another, a little wordplay on enemas aside, the letters are virtually wit-free. I’m happy that Porter was happy when his friend Sam Stark gave him a washing machine. But do we really need to see the thank-you note calling it ‘sensational!’? Granted, Porter was contemporaneously working on High Society’s ‘You’re Sensational’, which includes a household appliance reference to ‘The fair Miss Frigidaire’. But if there’s a link between laundry and lyric, Eisen and McHugh don’t mention it.

Which is odd, because they mention everything else. As well as averaging a footnote a page, the book has 28 pages of endnotes. ‘Our goal,’ they say, ‘was not to write a biography.’ Nonetheless, their editing is so detailed and precise that anyone wanting to write the story of Porter’s life could start — and, at a pinch, end — their researches here.

The trouble is, several such books already exist. What we don’t have is a properly critical Porter biography. And we need one. Not because he was the best lyricist of the Great American Songbook era (that award goes to Johnny Mercer). Not because he was its best melodist (that was Richard Rodgers). Not even because he was unique in writing both words and music (Irving Berlin did too). The reason Porter’s music demands serious study is simply that he was the Songbook’s most serious student of music. Unlike Berlin, who could play and compose only in the key of F sharp, Porter knew what he was doing.

A graduate of Paris’s Schola Cantorum, Porter orchestrated Schumann sonatas and even wrote a ballet — with quadruple counterpoint inversions — to be performed alongside a Darius Milhaud sonata. Truth be told, these ’prentice works weren’t very good, but Porter profited from them even so. Unlike the average show-tune writer, he was never reliant on the standard-issue 32-bar form. ‘Begin the Beguine’ runs to 108 bars, with accidentals on almost every phrase. His modal switches (most famously on the change ‘from major to minor’ in ‘Ev’ry Time We Say Goodbye’) have been compared with those of Brahms. ‘So in Love’, the knockout swooner from Kiss Me, Kate, is as intricately structured as a German lied.

‘To paraphrase an old bar-room ballad,’ Berlin once joshed Porter, ‘“Anything I can do, you can do better”.’ Eisen and McHugh couldn’t have a done a better job of editing these letters. But for what he could do, Cole Porter might deserve a better book than this.