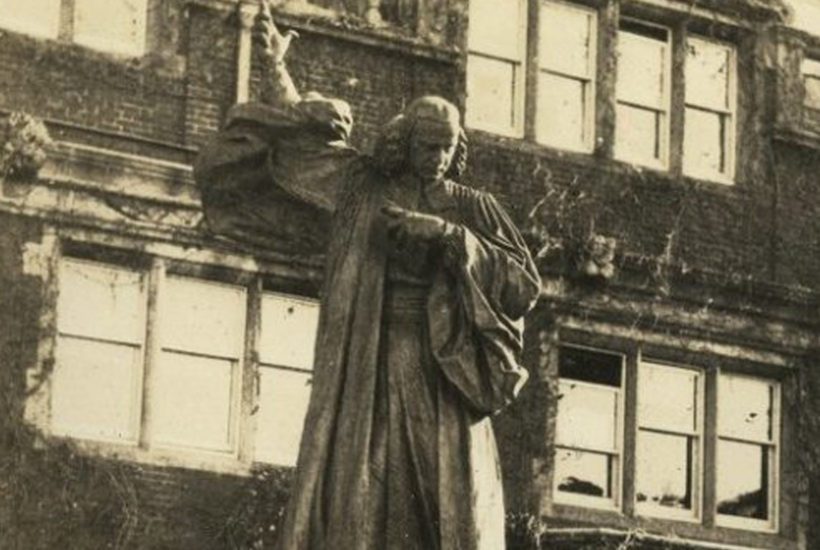 The statue of George Whitefield at the University of Pennsylvania

Shaun King wants to tear down statues of white Jesus. The mob is one step closer to that goal.

On Thursday, the University of Pennsylvania announced plans to remove its statue of George Whitefield — a highly influential 18th-century minister — due to his slave ownership.

‘The case for removing Whitefield is overwhelmingly strong. He was a well-known evangelical preacher in the mid-18th century, who notably led a successful campaign to allow slavery in Georgia,’ read a university email. ‘Honoring him with a statue on our campus is inconsistent with our University’s core values, which guide us in becoming an ever more welcoming community that celebrates inclusion and diversity…there is absolutely no justification for having a statue honoring him at Penn.’

Cockburn can’t help but feel this victory for the Ivy League revisionists means almost nothing. The statue of Whitefield is not even in public view: it is tucked away in the courtyard of a residence hall.

Penn also announced a new ‘Campus Iconography Group’, which will be led by the school’s ‘Chief Diversity Officer’. The group will ‘move forward expeditiously this summer’, presumably to virtue-signal by erasing some more history.

Whitefield was an English Anglican itinerant preacher who was a figurehead of the First Great Awakening movement. Drawing droves of listeners wherever he preached, Whitefield was perhaps one of the most important figures of the 18th century. He mastered the art of tract distribution, and he was constantly ridiculed by mainstream colonial newspapers. You could say he was the Donald Trump of the 1740s, albeit with a slightly higher degree of Biblical literacy.

It wasn’t until after Whitefield’s death that Christian denominations in the British colonies declared slave ownership to be a sin. While it’s true that Whitefield accepted a donation of slaves to work his orphanage in Georgia, his advocating for the fair treatment of Africans was ahead of its time. Whitefield regularly admonished slave owners for mistreating their slaves and failing to educate them in Christianity. He once purchased 5,000 acres in Pennsylvania to advance slave education.

Whitefield preached to mixed crowds and addressed African Americans specifically; when he visited a city, slaves rushed to finish their work so that they could hear his sermons. Phillis Wheatley, an author and former slave, lauded Whitefield in a eulogy: ‘He leaves the earth for heav’n’s unmeasur’d height, and worlds unknown receive him from our sight; there Whitefield wings with rapid course his way, and sails to Zion through vast seas of day.’

But these facts do not have a place in 2020, clearly. Instead of working to cancel a host of left-wing institutions and politicians that have actually forwarded racism in recent history, the mob has decided to erase the legacy of a man whose views on race in America were arguably ahead of their time.