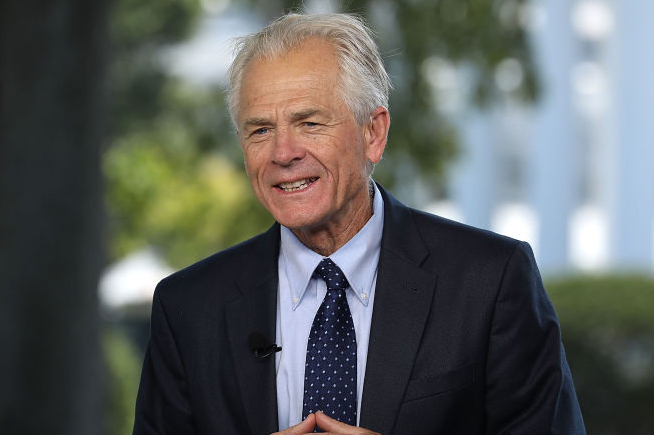 ‘Wall Street and Goldman Sachs…here’s the most important thing,’ said Peter Navarro, the White House trade policy pointman, at a Washington think tank Friday. ‘When these unpaid foreign agents engage in this kind of diplomacy – so-called diplomacy – all they do is weaken this president and his negotiating position.’

The factionalism within the White House itself and the in-fighting over Washington’s China policy was on full display. The president’s encouragement of rival camps battling it out has often spilled over into plain view during the first two years of this administration.

Navarro claimed that the United States government has a ‘different view’ from ‘the Wall Street bankers and the globalist elites’ in how to reform the American approach to China.

‘Consider the shuttle diplomacy that’s now going on by a self-appointed group of Wall Street bankers and hedge fund managers between the US and China,’ Navarro, assistant to the president and director of the White House National Trade Council, said at the Center for Strategic and International Studies. ‘As part of a Chinese government influence operation, these globalist billionaires are putting a full-court press on the White House – in advance of the G20 in Argentina.’

He then said ‘you’re not in good hands when negotiations get outside’ of the personal handling of President Donald Trump or his trade representative, Robert Lighthizer (who Navarro praised lavishly), in what was widely interpreted as a read-between-the-lines rebuke of more establishment-friendly forces such as Steven T. Mnuchin, the Treasury secretary, and Lawrence Kudlow, the Director of the National Economic Council.

Navarro’s speech raised eyebrows in conservative media standard-bearer the Wall Street Journal. A former White House official complained to me that the outlet’s coverage of the address ‘fucked’ Navarro. The WSJ quoted an anonymous White House official as saying that Navarro ‘is freelancing’ and ‘he’s speaking for himself.’ A White House official confirmed as much, to me: ‘These views represented Peter Navarro himself. They do not represent Larry Kudlow’s views, the [National Economic Council’s] views, or even the President’s views. It was the President himself who restarted the China trade talks.’

The WSJ, for its part, noted how the ‘mixed messages reflect bitter tensions in the Trump administration about how to approach China.’

Navarro’s address came as Mike Pompeo, Secretary of State, and James Mattis, Defense secretary, met their Chinese counterparts at the State Department in Foggy Bottom, in what was viewed as a fence-mending exercise. Mattis was slated to confer with the Chinese defense minister last month in Beijing, only to have that conversation pushed back by the latest ruptures in the US-Chinese relationship.

‘The administration’s goal when it comes to China is what can only be described as a hard containment strategy, or an updated 21st century version of how we defeated the Soviet Union during the Cold War,’ said Harry Kazianis, Director of Defense Studies at the Center for the National Interest. Critically, the White House, especially Navarro, has linked economic security with national security- especially as it relates to China.

‘Economically, militarily and politically, Team Trump’s goal is to isolate and ensure China’s rise does not become Asia and America’s nightmare,’ Kazianis said. ‘And so far they have broadly succeeded.’