Pigeons are the solution to the statue controversy 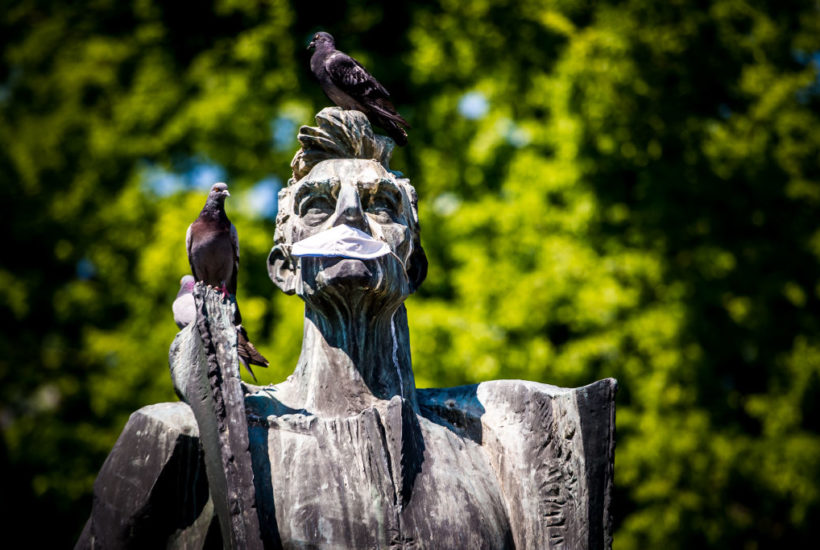 Pigeons sit on a statue of communist politician Marek Culen in Bratislava, Slovakia

Will nobody think of the pigeons?

That thought has repeatedly occurred to me, as beloved roosts for generations of urban pigeons have been toppled in one city after another on both sides of the Atlantic by the radical left, in the greatest eruption of iconoclasm since the era when Theodora graced the burlesque stage in Constantinople. Tearing down Confederate war memorials, it turns out, is a gateway drug to toppling statues of Catholic saints, Civil War abolitionists and Abraham Lincoln himself. Gradually, it has dawned on a horrified, watching world: they don’t hate Confederates. They hate statues! All statues!

Now, thanks to the actions of a lawless few, countless pigeons in cities in America and Europe have been rendered homeless. You would think that leftists, of all people, would care about the environment and not engage willy-nilly in pigeon habitat destruction.

Certainly in the US there is a case for peacefully removing some offensive statues, like those of Confederate generals, Benedict Arnold and Tokyo Rose…oh, wait, there aren’t any statues of Benedict Arnold and Tokyo Rose. As for others, I am open-minded. I understand the argument that Abraham Lincoln doesn’t deserve to be commemorated. He may have saved the Union and freed the slaves, but he did nothing to promote women’s suffrage or gay marriage or to fight climate change.

The solution, I think, is to find heroes whom everyone can admire, regardless of partisan or religious views. Like the military messengers in the Allied campaigns against the Axis powers in World War Two.

Take the daring messenger known as G.I. Joe. In 1943, during the Italian campaign, British troops of the 56th London infantry division took the Italian village of Calvi Vecchia back from the Germans. Unable to inform their American allies by radio that they were in control of the village, they sent G.I. Joe, who completed his mission just in time to prevent an American air raid that would have killed many of the British troops and villagers. For his valor, G.I. Joe was presented with the Dickin Medal for gallantry at a ceremony in 1946 at the Tower of London.

Female messengers played a part, too, like Winkie. In 1942, when she and her comrades, returning from a mission to Norway, crashed in the North Sea, Winkie made it back to Britain, which sent a mission to rescue the downed RAF crew. She, too, won the Dickin Medal for her valor.

If you’ve never heard of these unsung heroes, it’s because they were birds, and by that I don’t mean chicks, the now-canceled slang word for womxn, although Winkie was a hen. They were war pigeons.

Since antiquity, homing pigeons have been used in wartime to carry coded messages from the front to the rear and from side to side and this way and that, to use military terminology. Many pseudonymous scholars on the internet have argued that Allied war pigeons like G.I. Joe and Winkie were the decisive factor in the defeat of the Axis powers. All too often, however, World War Two is portrayed as a purely intra-human struggle, rather than what it was: the defense of liberty by a human-bird alliance against Nazis and German shepherds.

Sadly, columbaphobia persists in our day. Witness the brutal attempts of former London Mayor Ken Livingstone to expel the pigeons of Trafalgar Square. He even deployed a Harris hawk, a tactic which, to be sure, might have been justified had the targets been small yappy dogs in public parks. A statue of Ken Livingstone should be put up, if only to be redone in abstract expressionist style with pigeon graffiti.

Here is a solution to the war memorial problem. Antifa vandals in black pajamas with Gramsci Studies degrees and cans of spray paint would have no excuse to topple or deface monuments to war pigeons whose anti-fascist credentials are not in doubt. Nor did these heroes have any unfashionable opinions that might taint their records of service in wartime. They had no opinions at all. They were birdbrains, like today’s statue topplers.

So let us put up statues of the great war pigeons. They would be immune from controversy and they would also provide new spots where modern pigeons can roost, killing two birds with one stone.