As the story of Passover and the Exodus shows, without faith we are nowhere, dependent on the arbitrary caprice of the market and the pharaoh 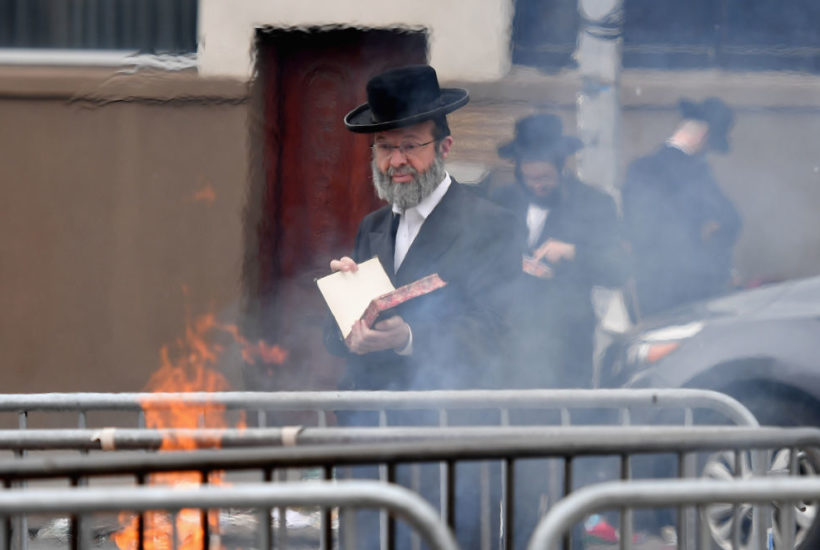 The dust has been expunged and disowned, the bread bin stands forlorn and empty, there is half a ton of matzah in the pantry, yet the Passover of 5780 is different from any other. We are to conduct a festival of liberation under lockdown. The seder, an expansive time for family and friends when the unexpected guest is prized and a cup set out for Elijah, has contracted into the pressure-cooker of the nuclear family or, hardest of all, a solitary vigil, its isolation as likely to be worsened as — excuse the language — leavened by a Zoom session.

On Passover, a rabble becomes a people. Is the threshold the night on which the atomizing forced labor of slavery is replaced by the deliberate and unifying decision to mark the ‘two side-posts and the lintel’ of their doors? Or does it come shortly afterwards, in the leap of faith required to pass over the Sea of Reeds?

Both. As Franklin would have said: a nation, if you can keep it. We are reminded that civilization must be remade constantly, in ourselves as in our society. ‘It is not your duty to finish the work,’ said Rabbi Tarfon of the first century, ‘but neither are you at liberty to neglect it.’

We will be hearing more from Tarfon tonight: he appears in the child-friendly Talmud class that is the Haggadah, the Passover reading. He is one of the Sages who lived in that vital and obscure period between the Destruction of the Temple (AD 70) and the defeat of the Bar-Kokhba Revolt (AD 135), and who re-founded Judean religion at Yavneh.

In the Haggadah, Tarfon is one of five Sages who, in a time of Roman oppression, attend a seder in Bnei Brak. They sit together all night, until their students come to them and say, ‘Our teachers, dawn has broken, it is time to say the morning prayer.’

A popular interpretation has it that the rabbis were using the seder as a pretext for planning a revolt, with their students keeping watch. Bnei Brak is now an ultra-Orthodox suburb of Tel Aviv and a center of Israel’s coronavirus outbreak. Outbreaks of fervor, outbreaks of sickness: the work never finishes and cannot be abandoned.

It is hard to read Tarfon’s line on personal responsibility and not think of the medical and emergency workers, the cash-in-hand food kitchen and delivery workers, and all the other people who, in the face of obvious danger, must keep working and trust their luck or their faith. They are like Nachshon, who jumped into the Sea of Reeds while the rest of the Israelites cowered, caught between the challenge of crossing and fear of Pharaoh’s horsemen.

Nachshon kept going forward until the water reached his nose. Only then did it subside. I think of my friend Jessica, a lung doctor who is working in the thick of it and is in isolation from her young children and her husband Ivan, who is working nonstop to secure hospital supplies yet still finding time to leave cooked meals on her doorstep. They have rushed forward like Nachshon, unhesitatingly, for all of us.

It is also hard not to be reminded of the contrasting failures of responsibility at federal, state and local level that have caused shortages of medical equipment and forced doctors and nurses to improvise protective clothing. These are institutional failures, but institutions have leaders, and the failure of institutions is also our failure, to hold ourselves to account by holding them to account.

Tarfon goes on to cast a skeptical eye on the gig economy: ‘If you have studied much Torah, you shall be given much reward. Faithful is your employer to pay you the reward of your labor; And know that the grant of reward unto the righteous is in the age to come.’ As the story of Passover and the Exodus shows, without faith we are nowhere, dependent on the arbitrary caprice of the market and the pharaoh.

In the wanderings and trials of Exodus, a people becomes a nation, with a ruler, a priesthood, laws and rites — and even a census and an attempted coup. Moses’s view of Cana’an from Pisgah adds the final component of what remains the recipe of national identity to this day, a land. Before that, however, Exodus shows how easily a nation and a people can collapse under pressure and revert into a rabble: the revolt of Aaron, the collective folly of melting down assets for the Golden Calf, the selfish collapse into mere sensuality in the dance.

We are all unnaturally divided from each other by this natural disaster. For Jews at Passover as for the Christians suffering in Holy Week, the enforced isolation contravenes a basic law of existence, essential for maintaining our own compasses as for society: ‘Al-tifrosh min ha-tsibbur,’ Hillel the Elder said: ‘Do not separate yourself from the community.’

As we count off the plagues of Egypt, we must remember that the failures exposed by our plague are not just economic and bureaucratic. They are also ethical, which is to say, both individual and communal. The American economy, and the society that depends on it, is built on a gig economy that exploits its rabble of workers. The healthcare system, inseparable from the health insurance industry, exploits the faith and commitment of its workers as we seek to exploit their service. The corporations of America privatized their profits in the fat years, and now expect the government — and the taxpayer — to tide them over during the lean years.

‘Pray for the health of the government,’ Tarfon’s contemporary Chanina the high priest says, ‘for without it every man would swallow his neighbor whole.’ If the American economy is a pyramid, its base is too wide and its tip too elongated for the structure to resist an earth tremor — or a plague. When, God willing, we emerge from this isolation, we will cling to this structure for economic salvation. But it has also been integral to how the plague has afflicted us, and to our failure to contain and respond to it.

A ‘mighty hand’ took us out from Egypt and turned us from slaves to free people. The hand of government needs to work harder for the hardest-working people in America, the wealthy must understand that they cannot survive in gated community, and none of us is at liberty to neglect the labor.

Wishing you all a Pesach sameach and a happy Easter. See you on the other side.