Who is the real Jared Kushner? 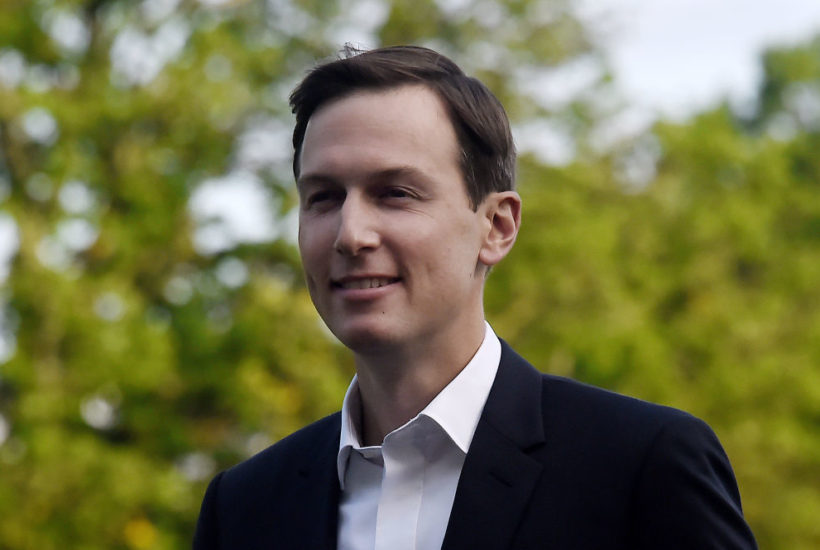 A friend in Washington saw Jared and Ivanka at a couple of smart DC dinner parties in the first year of the Trump administration. Ivanka seemed to want to depict them both as the internal opposition to her father, restraining his worst instincts, nudging him along on climate change or women’s issues. You might have assumed as much from ‘Javanka’s’ public image as a couple of rich young New Yorkers of conventional Manhattan liberal opinions who ended up in the White House by accidents of birth and marriage. (As Amber Athey writes, they haven’t changed.)

But my friend was most impressed with Jared Kushner. Kushner had already been questioned in the Mueller investigation. You couldn’t look at the TV news, the papers or Twitter without getting the strong impression that he was in deep trouble and maybe even going to jail with other Trump loyalists. The President himself (we now know) had turned to his advisers when Mueller was appointed and said: ‘I’m fucked.’ But to the dinner party guests, Kushner did not look like a man worried about the knock on the door and the perp walk. It wasn’t just that he was calm, my friend said. He was preternaturally, weirdly calm, completely and utterly unperturbed.You could have put your drink next to him to chill it. My friend was in awe.

It’s true, there was something to admire in Kushner’s refusal to whine, certainly compared with the frequent self-pity of his father-in-law, as the Mueller frenzy built. In another age, his detachment, his whole demeanor, might have been called aristocratic. Kushner was born into money, even if that money was new and spent freely to acquire respectability. Individually, Jared and Ivanka were attractive, glamorous people, my friend said, but together, Jesus. Seen close up, it was ‘glamour squared’, Kennedy levels of allure.

There was something of Joe Kennedy, Sr in the way Kushner’s father, Charles, smoothed young Jared’s way into Harvard with a $2.5 million donation (though the Kushners have always denied there was any connection between the money and the offer of a place). And, like Kennedy Sr, Kushner Sr has been on the wrong side of the law. Charles got a two-year prison sentence in a case that started with illegal campaign contributions and tax evasion, and ended with him hiring a prostitute to seduce his brother-in-law, then sending the video to his sister to stop her from testifying. (New Jersey’s US attorney at the time — one Chris Christie — said this was ‘one of the most loathsome, disgusting crimes’ he had ever prosecuted.) So maybe Kushner’s sangfroid was just how he’d been brought up to behave. When the feds are closing in, you keep quiet. Never let them see you sweat.

Kushner’s appointment as senior adviser to the President made the White House seem more royal court or family business than democratic administration. He was 36, even more fresh-faced than that would imply, and was put in charge of everything from government reform to peace in the Middle East — an American Dauphin. Perhaps unsurprisingly, Jared found it easy to talk to the Saudis, a truly family business combined with a royal court. He spoke, princeling to princeling, to the Saudi heir Mohammed bin Salman (MbS) with whom he had an instant rapport.

Kushner made an unannounced trip to Saudi Arabia in October 2017, staying up until 4 a.m. to ‘swap stories and plan strategy’ with MbS, as the Washington Post reported. The following month, MbS began a crackdown, arresting enemies who included some of the richest and (formerly) most powerful men in the kingdom. Many were taken to the Ritz-Carlton hotel in Riyadh, where it’s claimed they were tortured. The CIA believes that MbS himself gave the order to murder Jamal Khashoggi, the dissident journalist who was dismembered inside the Saudi consulate in Istanbul. How much did MbS reveal to Kushner of what he planned? An official who works with Kushner told me the idea that Kushner gave MbS the green light was ‘nonsense’.

The same administration official also denied claims that Kushner’s problems with getting a government security clearance (to view the most highly classified material) had anything to do with the Saudis. NBC said that ‘an FBI background check raised concerns about potential foreign influence’ on Kushner — who was known around the White House as one of the most voracious readers of the President’s Daily Brief, according to the Intercept. The Intercept said that MbS had bragged that Kushner was ‘in his pocket’ and passing him information, though the report also allowed that MbS could have been lying about that to persuade both allies and enemies that he had the backing of the US government.

The Spectator has reported allegations that information Kushner requested from the CIA would be echoed back in US monitoring of calls between members of the Saudi royal family weeks later. The White House official poured scorn on all these stories: if Kushner had been leaking secrets, he wouldn’t have just lost his security clearance, he would have been prosecuted.

Kushner got his security clearance after President Trump ordered officials to give it to him, overruling whatever objections they may have had. The President and his inner circle have little patience with the slow, grinding ways of the institutions of government that surround them. In Kushner’s case, this appeared to mean it was OK to meet with Chinese officials at the White House with ‘nobody else there in the room’, as the New Yorker reported. This was part of a pattern.

A couple of years ago, I met a character called George Nader. He had been a witness in the Mueller inquiry — that’s why I was speaking to him — but he was also notorious as a convicted pedophile (he is in prison now for abusing a child). Nader boasted to me that he’d been to the White House many times to help Kushner set up President Trump’s visit to Riyadh without interference from the NSC or the State Department. It seemed absurd to me that a convicted child molester would have such easy access to the White House, but it turned out to be true. He’d also been meeting Steve Bannon, then the administration’s chief strategist, who blamed Kushner for making the introduction.

One story about why someone like Nader could have known Kushner in the first place was told at length in our March issue by Andy Khawaja, a Lebanese-American businessman who claimed that Nader had run a scheme to pump millions of dollars into Trump’s election effort from Saudi Arabia and the UAE. As you would expect, this story was denied by everyone who had supposedly taken part in what would have been an illegal scheme. The Trump campaign told me that Nader had asked for a meeting but had been turned down: it never happened. This was untrue. As the New York Times reported in 2018, Nader was ‘meeting frequently’ with Kushner during the campaign and even saw Don Jr at Trump Tower. Nader allegedly told Don Jr ‘that the princes who led Saudi Arabia and the United Arab Emirates were eager to help his father win election as president’. At the time, Kushner was one of the people running the Trump campaign, even its de facto manager.

The White House official I spoke to said the campaign was Kushner’s shining achievement, the thing that qualified him for high office. ‘Jared played a massive role in the campaign, second only to the candidate himself.’ Stories of dark money and foreign conspiracies were more of the same ‘nonsense’ Kushner had suffered during the two years of the Mueller inquiry. The official said that of course Kushner appeared relaxed at Washington dinner parties — he knew himself to be innocent. Today ‘the ankle-biters of the world’ kept trying to diminish his status in the White House. He was ‘continually being underestimated despite all of his accomplishments’.

These include moving the US embassy in Israel to Jerusalem, getting a trade deal with China and ensuring a supply of masks and gloves during the coronavirus pandemic. Did Kushner, like Don Jr perhaps, have his eye on a governorship or even the presidency? No, the official said; after serving in this White House, he would ‘probably move on from politics to other things’. What might those ‘other things’ be? Perhaps even Jared Kushner doesn’t know.