Puritanism is back…and welcome to it 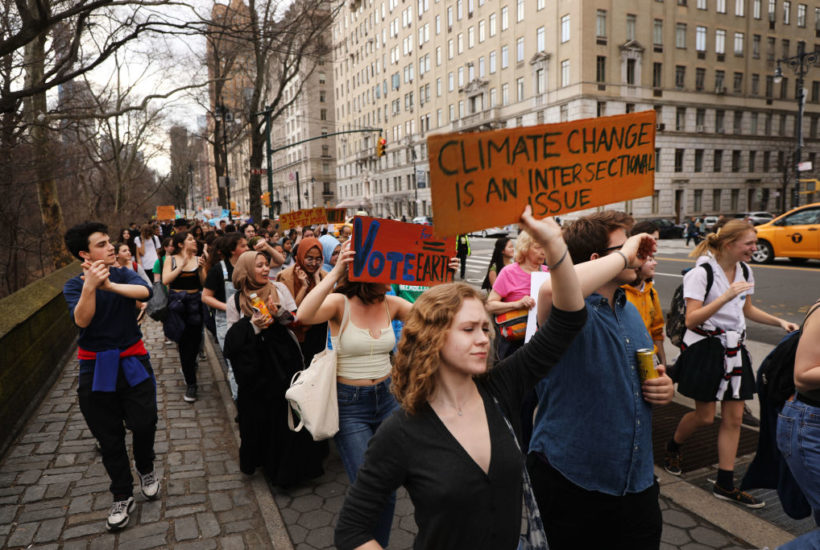 Cole Porter sang: ‘In olden days, a glimpse of stocking / Was looked on as something shocking / But now, God knows, / Anything goes.’

Everything went, and with it: humor.

World War One was followed by a licentious riot of amoral libertinism, with the collapse of religious convictions, ethical norms, societal conventions and plain good manners. Nothing was sacrosanct and this turned laughter into hard work.

Like going to see Waiting for Godot and waiting for the punch lines. Or skating over the thin ice on the river of despair in the novels of Evelyn Waugh. Or fearfully suspecting, with Dr Strangelove, Catch-22 and Slaughterhouse-Five, that levity might be a symptom of mental illness.

Real humor depends upon irking the dour, the censorious and the po-faced. Lemon-sucking puritans were sadly scarce for most of the last century. And so we were living in a mirth-deprived world.

But the long prudery drought is over.

Thanks to a New Piety — ‘wokeness’ as it’s called — we have many more bluenoses, calamity howlers and vinegar-pusses to upset. Japes at Tartuffian cant can begin anew. Twenty-first-century thought-leaders have returned to a straitlaced piousness, not only in opinion but even in grammar. The woke are claiming offense at such terms as ‘mankind’ and grappling with English as if the language were a professional wrestling villain attempting to pin ‘womynkind’ to the mat.

(Rematch to be announced. ‘Womyn’ is considered trans-exclusionary by gender activists.)

To be woke is to maintain a state of mind where you are constantly and acutely alert to social injustice and permanently on the lookout for more social injustice to be alert to. Or what I would call a good reason to take a nap.

Which you’d think would be acceptable since being woke doesn’t actually entail doing anything. But, thankfully for the jester, hypocrisy never sleeps. If you’re woke you must stay ‘conscious’, in order to continually ‘communicate’ how vigilant you are about toxic masculinity, how mindful you’re becoming about cultural appropriation and so forth ad infinitum.

Being woke is a parody of being Born Again: instead of your accepting Jesus, people like Jesus (‘privileged’, famously well- connected fathers) have to accept you.

And it’s about time we had a new religion. Religion has been the mainstay of lampoon at least since Voltaire. But the old established creeds are no fit targets for jocularity — doddering congregations, frayed theologies and sorry impoverishment from being sued for less than comical behavior. We needed a fresh theology to poke fun at.

Of course the bien pensant idea these days is that making light of any religion is ‘insensitive’ and constitutes religious bigotry. Although these correct-thinkers also consider people who take their religion seriously to be bigots, especially if that entails opposition to abortion.

In other words, you’re only a bigot if you practice your own religion. Other religions are deeply spiritual and full of peace of mind and goodwill toward persons and — what’s especially woke about them — they’re diverse.

Diversity is my favorite new shibboleth — you must both pronounce it correctly and not pronounce it at all. Differences between races, ethnicities, cultures and various genders (after a million years with just two, several more have been discovered) can never be acknowledged. Then they have to be celebrated.

And tolerance is my favorite new sin. I gather it is a modern moral lapse to practice toleration when glorification is what contemporary mores demand. Witness the shamed Colorado confectioner who, on the occasion of a gay wedding, failed the ‘if I knew you were coming I’d’ve baked a cake’ test.

A New Piety requires up-to-date saints. Fortunately there’s no shortage. Martyrdom has become ‘inclusive’. Hurt feelings count. So does Joe Biden smelling your hair. Saintly relics are close at hand. No doubt you have a mental reliquary filled with splinters from the true cross of your personal victimhood.

And worship has never been easier. All you have to do by way of praise and adoration is think well of yourself. It’s another new sin not to. Self-esteem is a human right. You are a good person. You are an excellent person. Look at your tattoos — you’re a signed masterpiece.

But what if someone should tire of being merely holier-than-thou? (Though no woke individual has yet done so.) All they has to do — using the plural pronoun as singular to show the world how prose needs a political correction — is recycle something. Preferably something indicating ‘awareness’ and ‘engagement’, such as an empty container of organic gluten-free non-GMO locally sourced fair-traded drain cleaner. Being holier-than-globally-everybody is a sustainable alternative for the progressive-minded.

And Charles Dudley Warner’s quip, ‘Everybody complains about the weather, but nobody does anything about it’? That is so early-Trump-campaign. Everybody you know is devoutly stopping climate change. The way you did when you made obeisance over the trash cans marked ‘glass’, ‘paper’, ‘polypropylene plastic’, ‘polystyrene plastic’ and ‘biodegradables’ — worshiping the garbage can.

Meanwhile, everybody I know is thinking that delivering trigger warnings to the butts of ridicule is a small price to pay for a more amusing life.