Have you been radicalized by the New York Times? 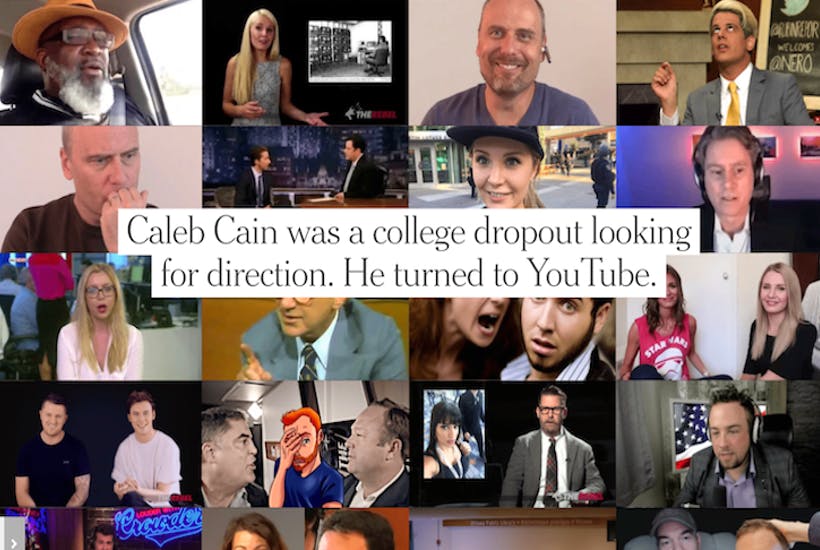 One of the words that has become increasingly useless over recent years is ‘radicalization’. As more and more terrorist attacks took place across the West in recent years the word got trotted out with some utility. al-Qaeda and Isis fighters were reported to have been ‘radicalized’. Soon a whole arm of dubious expertise grew, purporting to be able to trace the various ‘paths’ to radicalization.

But at some point in the present decade the word became used, not just as a term of faux-science, but as a way to dismiss almost any position against which a certain individual or group of individuals were opposed. Voters were said to have been ‘radicalized’ before putting a mark in the box beside the name of Donald Trump in 2016. Likewise every ‘wrong’ vote in Europe has become an example of further ‘radicalization’ of the general public.

Sometimes these claims are so ridiculous that it is hard to work out whether they are truth or satire. Three years ago the Guardian ran a piece by an anonymous author claiming to have been ‘radicalized’ by watching various YouTube videos. So radicalized did he become that, as the headline put it,  ‘“Alt-right” online poison nearly turned me into a racist.’

That piece – which I wrote about at the time – in fact turned out to be a spoof. So eager was the Guardian to claim that a range of liberal and conservative voices online were in fact causing a problem at least equal to that of Isis and al-Qaeda, that the paper didn’t just not bother to find out if their contributor was for real or not. It didn’t bother to find out whether he was actually real or not.

Now the New York Times has gone one better. Yesterday, they ran a prominent piece in the print and online editions headlined ‘The Making of a YouTube Radical’. The piece is about a single unheard of young man in America who claims that because he watched ‘radical’ videos on YouTube he became ‘radicalized’. For instance:

‘“I just kept falling deeper and deeper into this, and it appealed to me because it made me feel a sense of belonging,” he said. “I was brainwashed.”’

The montage of scary YouTube personalities which the NYT illustrates the piece with, and likes to blame for such a horrific story of absorption of wrong opinions is – conveniently enough – a number of the paper’s hate figures. Jordan Peterson, of course. Then some people from Infowars. And Milton Friedman. That’s right. The late Nobel Prize winning economist is now – posthumously – a ‘radicalizing’ figure. In trying to elide all such boundaries the NYT itself provides a very good demonstration of why people might be turning away from the mainstream media. The paper doesn’t even attempt to give a fair summary of the problems it claims to be identifying.

So it would be interesting to try this exercise back on the NYT. In recent times there have been a number of shootings and other attacks on synagogues in the US. You could look at this in a number of ways, trying to weigh up a horrible set of circumstances and working out who and what might have caused them, apart from the deranged and sick culprits themselves. If you wanted you could almost certainly draw a wider and wider set of circles around the events, extending the responsibility for those shootings outwards to encompass people who had nothing to do with the attacks but who could be said to have provided various aspects of the ‘mood music’ for such attacks to happen.

Which brings me back to the NYT. Because only two months ago the paper published a cartoon which was widely recognized as being violently anti-Semitic. It showed a dog with the Star of David around its neck leading a blind US president. Purest Der Stürmer in its way, and so blatant in its racism that the NYT condemned itself for anti-Semitism. But who knows which brains that NYT cartoon fed into? Who knows who it radicalized? Who knows the future radicals to whom it gave a nod and a wink, saying ‘If this is acceptable to the NYT, why shouldn’t you go to the illogical next stage?’

Of course this is the sort of speculation the NYT does not wish to engage in. Because the paper – rather obviously – doesn’t want to take itself down. But they clearly do want to take down a range of popular online competitors, including popular internet talk-show hosts like Dave Rubin and Joe Rogan. It seems to have a problem with those platforms on which people are willing to have open and difficult conversations about issues which are far from fixed but which the boundary-beaters at the NYT and other journals are trying to ensure are closed. Which is why they devote a lengthy article and create bar-charts and content-charts to analyze the precise YouTube watching habits of one young and unknown man who has never actually done anything. He isn’t a school shooter. He isn’t a mosque or synagogue shooter. The NYT writes of how by November 2016 the subject’s ‘transformation was complete’ but this ‘transformation’ resulted in nothing, other than watching YouTube videos.

This isn’t news. It isn’t even fully informed or nuanced analysis. It is simply another demonstration of the double-standard, drive-by shootings that parts of the media are willing to perform in this inglorious stage of its history. A habit which, funnily enough, demonstrates why people might be becoming skeptical – and moving online – in the first place.