Whatever he says or does, his lead in the polls keeps growing 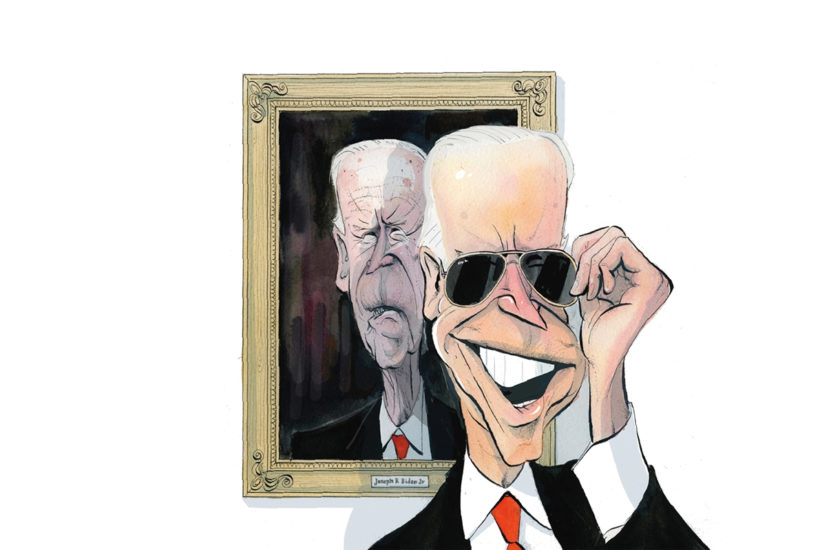 It is usually a bad idea for a presidential candidate to leave himself open to the accusation that he is soft on law and order. Yet last weekend Joseph Robinette Biden Jr did exactly that. He attacked the ‘egregious tactics’ of the federal officers trying to control the apparently never-ending riots in Portland. Sensing an open goal, President Trump’s campaign promptly accused Biden of ‘siding with the criminals’.

In any normal election year, such an exchange would be a major flashpoint. In the COVID-19-riddled anarchy cauldron that is America in 2020, nobody much cares. Joe Biden can say pretty much anything, or nothing at all, and his lead in the polls just grows and grows. There’s now fewer than 100 days until the presidential election, America’s cities are still burning, and the 77-year-old challenger who has no idea what he is saying is thrashing the 74-year-old President who has no idea what he is saying. The Chinese must be quaking.

Team Trump are quick to insist that, as November draws closer and voters begin to focus on the (still presumptive) Democratic nominee, the dynamics of the race will shift in their favor. Biden has kept a low profile, in large part thanks to the pandemic. As the media scrutiny intensifies, his weaknesses as a candidate will become glaring; his incipient dementia, too embarrassingly obvious.

The trouble is, the Trumpies have been saying that for months now, and Biden just keeps plodding ahead. It’s increasingly clear that Trump doesn’t know how to grapple with doddery old Joe. The President is flailing. In an effort to peel off a few black voters, his talking heads are saying that Biden is racist because he gave a eulogy for the infamous Dixiecrat senator Strom Thurmond and made some un-PC remarks in the 1990s. At the same time, they say he’d be the most hopelessly woke commander-in-chief. It’s hard to square these differing images.

The Trump campaign has for now apparently given up on targeting Joe directly. The President and his spinners are going after the more left-wing Democratic governors and mayors who have shut down their states and cities in response to the pandemic while pandering to the protestor mobs. That’s an admission of defeat. Trump is now causing a storm on Twitter by mooting the possibility of a delay to the election on the grounds that the result will be ‘INACCURATE & FRAUDULENT’. That suggests he thinks he is going to lose. Or he’s bored — or just desperate to distract attention from the miserable economic news.

Biden, meanwhile, has been called a Teflon candidate, but that doesn’t quite do justice to his slipperiness. He’s almost sphinx-like. His low-visibility campaign means he can represent different things to different Americans. To working-class whites, he’s regular Joe, the Irish-Catholic boy from Scranton, Pennsylvania. To black voters, he’s Barack Obama’s loyal vice-president who’s always had that Clintonian knack of sounding empathetic. To suburban women, he’s the elder statesman who will bring back decorum to the Oval Office. To former Republicans and independents, he’s not Donald Trump. To tantrum-throwing revolutionaries, he’s a pushover-in-waiting. Biden’s campaign logo features his famous aviator sunglasses — and what could be more American? But those reflective shades are also quite a good metaphor for Biden’s candidacy: you see what you want.

Biden’s legislative priorities are similarly elusive. His campaign is adept at sounding radical without committing to anything controversial. This month he has promised to ‘rip the roots of systemic racism out of this country’ and ‘transform this country’. Exactly how, he doesn’t say. On his website, the ‘Joe’s Vision’ section features more than 40 ‘plans’ or ‘agendas’. These include ‘The Biden Plan for Climate Change’, ‘The Biden Plan to End Violence Against Women’ and ‘Joe Biden’s Agenda for the Catholic Community’. It’s all very repetitive: ‘Joe Biden will ensure everyone is treated with dignity — no matter their race, gender, sexual orientation, religion or disability,’ Team Joe declares on almost every page. (After 15 minutes reading this platitudinous dross, I searched in vain for ‘Joe’s Plan for the Bored Senseless’. Inclusivity has limits.)

The worry among conservatives and moderates is that President Biden would be a Trojan horse for the hard left. He’s so old that it seems unlikely he will be able to preside fully over one term, let alone two. Biden has already invited Rep. Alexandria Ocasio-Cortez, the 30-year-old starlet of American progressivism, to help formulate his policies. Would he let the young radicals take charge?

Probably not. A quick look at the front ranks of the Democratic party offers proof as to how tightly the gerontocracy grips its power: in the House of Representatives, the speaker is Nancy Pelosi, aged 80; the majority leader Steny Hoyer is 81 and the majority whip (and key Biden ally) Jim Clyburn is 80. Retail politics is their modus operandi. Revolution is not.

In the coming days, Biden will announce his vice-presidential nominee, which, given his age, could prove a momentous decision. He may well be picking the next commander-in-chief. He has promised that he will choose a woman and the indications are that it will be a black woman — Kamala Harris, Val Demings, Karen Bass and Susan Rice are considered favorites. Biden may gamble on an outsider, as did his late friend John McCain, the Republican nominee in 2008, in choosing Sarah Palin, the mother-of-five governor of Alaska. Considering his big lead in the polls, it seems more likely that he will plump for a ‘do no harm’ running mate — somebody who ticks the identity boxes but doesn’t upset the wrinkled hierarchy.

What is certain is that Biden is willing to spend vast amounts of federal money. The Trump administration has already thrown $6 trillion at the COVID-19 crisis. Biden wants much more. ‘Whatever it takes,’ he says. He also proposes to increase government healthcare spending dramatically, and his answer to racism is more tax credits for black small-business owners plus a $100 billion fund for affordable housing for African Americans.

Some observers are concerned about Biden’s head for figures. He recently claimed that America had ‘over 120 million dead from COVID’; in a debate earlier this year, he said 150 million Americans had been killed by gun crime. Never mind — it’s only Joe. He won’t be doing the sums.

Progressives are growing excited at the possibility that Biden might surprise everyone by becoming the next Franklin Delano Roosevelt. That is, he’ll put America back to work after the ravages of Covid in the way that FDR rebuilt the US economy after the Great Depression. Biden is indeed mooting a Green New Deal to save America and (as luck would have it) the planet at the same time. But Obama, who also came to power in a crisis, promised much the same 12 years ago and left America and the world disappointed.

The only hope that Biden will do better is, curiously, the lack of hope he brings. He is in no way burdened by the great expectations that accompanied the arrival of the first African American president in 2009. Biden offers, at best, a dim memory of the optimism that Obama inspired — as well as the prospect of relative calm after four turbulent years of Trump. His election will be the democratic equivalent of a giant sigh.

Biden’s greatest strength is that, unlike Trump, he is widely held to be a good man. He has suffered. In 1972, he lost his wife and daughter in a car crash, and, in 2015, his son Beau to brain cancer. Americans admire nothing more than triumph over adversity, and Joe is arguably at his best when talking about grief. His ability to emote helps blunt the other Trumpian attack line: that Biden is corrupt. As vice-president, he appears to have helped his other son, Hunter, make highly lucrative deals in China and Ukraine. Joe was also apparently complicit in the shady attempt to thwart Trump’s presidency by using the FBI to spy on his campaign.

For some reason, nobody wants to believe that the affable old boy is guilty of such crimes. Yet one of the reasons the Obama-Biden administration ended in the ascension of Trump was that Americans were sick of the venality in Washington; the ‘swamp’ that gets rich selling out America’s interests. It’s hard to imagine that Biden, who used to be known as the ‘senator from MBNA’ because of his lobbying efforts on behalf of the credit-card industry, would lead an altogether pure administration. It’s worth noting that the Chinese parent company of TikTok — the Chinese social media app which Trump’s secretary of state Mike Pompeo has suggested should be banned on national security grounds — has hired key Democratic operatives with links to Biden ahead of the November election. The Biden campaign this week forced staffers to delete TikTok from their phones. The Democrats know they cannot afford to let Trump make them look weak on China, which, thanks in no small part to COVID, is now clearly established in the minds of voters as foreign adversary number one. The Biden line is that Trump is being played by Beijing. It’s difficult, however, to deny Biden’s record of accommodating China as vice president under Obama.

A President Biden would be more internationalist in outlook than Trump has been. That would make him more likely to take military action than Trump, who, for all his apparent hotheadedness, should be given credit for not having started a new war. Biden, by contrast, has supported just about every foreign intervention America has embarked upon in the past 30 years. For him, restoring the soul of America may well mean bombing somewhere to bits.

He would also look to revive the multi-lateral trade agreements that Trump so rudely junked. At first blush, Biden’s victory might seem bad news for Brexit Britain, since Trump has always made such positive noises about our departure from the European Union. But Brexiteers have become pessimistic about achieving the ‘beautiful, beautiful’ US-UK trade deal that Trump has long promised. There is now growing excitement that, under Biden, the United States and the United Kingdom might join the Trans-Pacific Partnership, now renamed the Comprehensive and Progressive Agreement for Trans-Pacific Partnership, to form the world’s greatest trading bloc.

Besides, the political class only likes dealing with the political class, and most Tory MPs would be happier working with Biden appointees than the wild characters from the Trump administration. Under Biden and Boris, the bonds of the Obama and Cameron administrations might be re-established. Both countries can happily go back to hawking their interests to Beijing; the civil unrest in America will abate, at least temporarily; and everybody will forget about those chaotic years when Donald Trump was in charge. Keep on rocking in the free world!