Wendi would humiliate him at dinner parties by saying things like, ‘What do you know? You are an old man’ 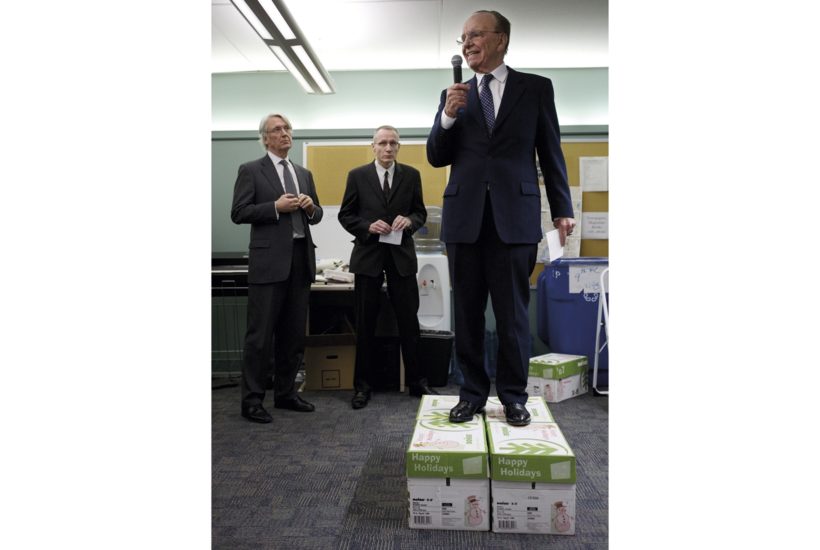 For more than four decades I have been around Rupert Murdoch. In that time he employed me in both London and New York, invested in my business ideas and ultimately fired me.

It was always rock ’n’ roll around Rupert and that’s the way I liked it. So you would have thought that when the BBC made its current three-part documentary on him, it might have come to me for my views.

A credited researcher on the doco was Roy Greenslade, whose claim to fame is that when he edited the Daily Mirror he offered a £1 million prize in a Spot the Ball competition, with one drawback…there was no ball. It was a con to attract readers and he sanctioned it appearing in the paper. Instead of being jailed for fraud, he became, as you would expect, a Guardian columnist and a media professor at City University. Remember that, next time he’s pissing from the top of the pyramids on tabloid excesses.

It’s true that phone hacking is a stain on the Murdoch record. It’s personal to me. I was hacked seven times, and Milly Dowler went to school literally 150 yards from where I live. But nobody can seriously believe Murdoch knew of the criminality at the News of the World. Had he known, I can assure you that he would have taken draconian action. It would have been in his interest to do so, and that has always been his driving force.

If push came to shove (and it was a marvel to behold), he would toss aside his children, toss aside loyal colleagues and toss aside wives. Who could compete with that kind of ruthlessness?

I was once in his Aspen home where there was a photo of Murdoch holding a shark-like fish. ‘That’s me,’ he beamed. Pointing at the shark. Good gag. Close to the truth.

There are two reasons why there will never be another Murdoch in the media. One, on a personal level, his single mindedness cannot be replicated; and two, the days of newspapers are drawing to a close and as their circulations collapse, so does their power. News sites simply don’t have the same leverage.

Even in his 90th year, Murdoch is doing precisely what he wants. Despite his age, and despite concerns over his health, he took a 6,000-mile plane trip from his home in a Beverly Hills vineyard to his Cotswolds mansion, where he is spending the summer with his wife, Jerry Hall. Eat your heart out, Dominic Cummings. All you did was go by car to Durham.

But to paint Rupert as a Logan Roy is ridiculous. Anybody who has worked closely with him will tell you his enthusiasms, his warmth and his never-ending drive make him fun to be around and exhausting. If you are a shareholder, you want a Rupert Murdoch to run your business. Always on. Always thinking. Always plotting. Literally 18 hours a day, seven days a week. And as a 12 percent shareholder but with a voting right of three times that, always aligned to making you and him wealthier.

You can’t be perfect. The family empathy gene is in short supply. I was invited by Rupert to a dinner at the Mirabelle off Berkeley Square, where, surprisingly, we were all introduced to Wendi Deng, 38 years his junior, later to be wife number three and mother to their two children.Also there was Liz Murdoch, eldest daughter of marriage number two. Being of the diplomatic kind, Liz oohed and aahed as Wendi showed her the hugely expensive diamond and emerald bracelet Rupert had bought her. The reason Liz did really well, as she revealed to me later, was that she had never met Wendi before. A tough introduction.

The marriage to Wendi was a mistake. She would humiliate him at dinner parties in front of a Clinton or a Kissinger by saying things like, ‘What do you know? You are an old man.’ He would give a sheepish smile but it would go into the black book.

At the end, he would read to his kids and then go to bed early. Alone. As has been well documented, the marriage collapsed amid reports of their incompatibility and, for added spice, earnestly and plausibly denied rumors that Wendi had been having an affair with Tony Blair.

Divorce cost him a fortune. There was a prenup and a postnup and she still cleaned up. I was on a boat with him in the Med while the divorce negotiations were played out. I have never seen him so strained or so uncommunicative.

He is so much happier with Jerry, although I was NFIed to their wedding because I had written a column saying Bill Wyman should be arrested for under-age sex with Mandy Smith, not knowing that Bill’s wife was best friends with Jerry and also that Bill had prostate cancer.

Agree it would have been a little difficult at the reception.

The NFI was broken to me by Rebekah Brooks, the CEO of News UK, and apparently put in charge of wedding invites. She does most of Rupert’s difficult personal tasks. All media companies need a Rebekah.

She has adopted a much lower profile since being cleared of hacking charges at the Old Bailey. I don’t doubt she was innocent but found it strange that in three years of running the News of the World she had never got right to the bottom of where those great stories came from.

Today Rupert’s British empire is not what it was. The Sun is losing £30 million ($39 million) a year and its sales are so low they have decided not to release the figures. In my day, it was four million; today it’s around 800,000. Very sad. My advice: the working class won’t buy a woking-class paper.

All British journalists should be thankful Murdoch invested here. He has kept literally thousands in work for decades. And in the case of the Times, has lost more than a billion in his 40-plus years of ownership.

You should judge him by his enemies. Watson, Mosley, Grant. Enough said.