Finally a sports team name gets a good reception 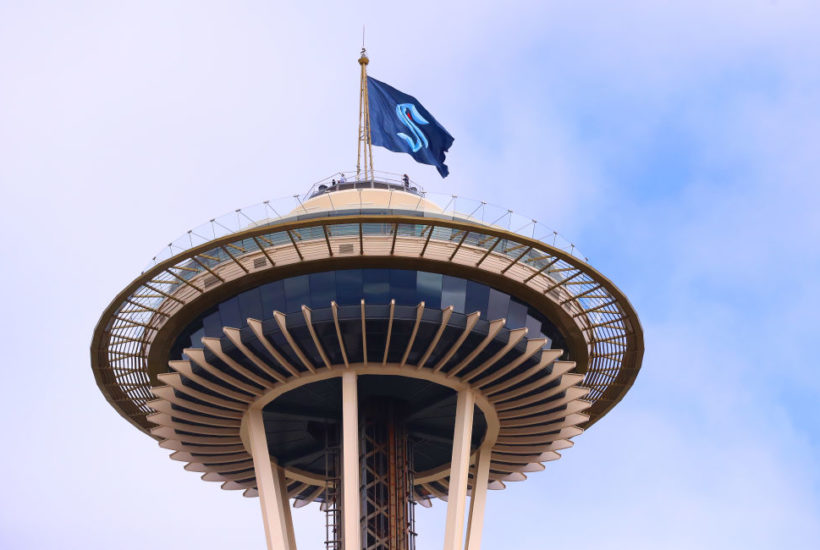 The Seattle Kraken flag flies above the Space Needle

Lately, the dialogue around the names of professional sports teams has been a heated, politicized, and angry miasma. The Washington Redskins announced that following years of pressure they’d be dropping their controversial name — a term for Native Americans that is now widely considered a racist slur — only to announce this week that they’d be ‘The Washington Football Team’ until further notice. Native American mascots and team names have been a political lightning rod for decades, but in today’s charged climate activists have broadened their scope, suggesting that the Texas Rangers ought to find a new name too.

So it was a pleasant surprise to see the social media leviathan get excited about a new team name that people actually like. That’s what happened this week with Seattle’s forthcoming NHL team, which announced that it would be called the ‘Seattle Kraken’. In extensive fan polling that seemed to take half a decade, Kraken — an enormous tentacled beast long thought to be purely mythical but now considered to be likely rooted in sightings of the giant squid — had beaten out names like the Sasquatches, the Grunge, the Fightin’ Geoducks, and enough salmon-themed monikers that it led to the rise of a brief protest initiative called #NoFishNames.

The Seattle Kraken made its debut with a video trailer that paid suspenseful homage to Seattle’s maritime history and notoriously gloomy weather, looking more like B-roll from Deadliest Catch than an introductory video about a hockey team. Its branding clearly took  a lot of money and a lot of meetings, with its secondary logo getting particular acclaim — an anchor that cleverly incorporated the city’s famous Space Needle.

But don’t let that seriousness fool you. Within an hour of the Seattle NHL team unveiling its official name, some noisy fans on Twitter had already decided to call themselves ‘Krakheads’ and to refer to the team’s home of the Climate Pledge Arena (yes, that’s really its name — thanks to Jeff Bezos) as the ‘Krakhouse’. This promptly got the attention of naysayers who found it inappropriate for them to take on a nickname that was a direct reference to the ravages of the crack cocaine epidemic. It seems even bloodthirsty giant squids aren’t safe from threats of cancellation.

Professional sports team identities in the social media age are a fascinating collision of meticulous, top-down branding and pure fan chaos. Sometimes, keeping the two in balance isn’t easy. In September 2018, the Philadelphia Flyers hockey team unveiled its new mascot, and the city’s sports fan community exhibited a collective sense of shock upon meeting ‘Gritty’, a nightmarish orange beast with enormous googly eyes. The Guardian decried him as ‘an acid trip’ and ‘a horrifying bearded man-Muppet hybrid whose eyes are permanently rolling in their sockets, presumably from years of drug use’. Within 24 hours Gritty was using Twitter to send death threats to the Pittsburgh Penguins’ mascot, ‘Iceburgh’. And somewhere in there Philly went from horror to intense protectiveness. Local leftist activists decided that Gritty was the new mascot of the ‘resistance’, and when President Trump visited the City of Brotherly Love in October 2018 protesters chanted ‘Gritty Hates Trump’ and carried handmade banners that showed the deranged orange monster waving an antifa flag. Considering this was fewer than two weeks after Gritty was unveiled in the first place, it’s pretty impressive.

(The Seattle Kraken haven’t unveiled their mascot yet, but Gritty is already talking smack.)

We live in an age where there is tension about where cultural power really lies — if it’s still a top-down effort on behalf of elite professionals, or if it’s fully in the hands of smartphone-armed fans (and haters). Marketers like to say it’s now the latter, and ‘the consumer is in control’ is a much-repeated adage at industry conferences even if it isn’t really true. But sports franchise brands, in particular, are nothing without dedicated and noisy fans who are on board for life and like to feel as though they’re a part of the organization. Seattle could easily have botched its NHL team launch; judging by some of the reactions on Twitter, plenty of people were just thrilled they didn’t go with the Sockeyes, and the team now likely has thousands of brand new fans who have never been to Seattle or paid attention to hockey but who happen to be H.P. Lovecraft aficionados. Likewise, the Philadelphia Flyers could have really messed things up with Gritty — who wasn’t an easy sell at first — if they’d vocally disavowed the orange demon’s cult status as meme king and anarcho-leftist hero. But on the other hand, they can’t always let the fans run with it. Globalized and always-on media means that if the management of a team with a Native American name doesn’t cut down on fans’ ‘tomahawk chop’ stadium chants, it’ll be swiftly accused of racism.

But the tide has certainly shifted toward fan power. In 1993, Anaheim, California’s NHL team was named the Mighty Ducks as a corporate marketing tie-in with a kids’ hockey movie franchise, which seems like it could never be pulled off today. Now, in the era of the Kraken, fan polls that produce eccentric team names can be the best publicity the team could ask for. In 2018 Madison, Alabama put the name of its new minor league baseball team up for fan voting and wound up with finalists like the ‘Moon Possums’ and ‘Space Chimps’ before settling on the ‘Rocket City Trash Pandas’.

Weird, sure. But the internet loved it, and for once a viral hit really paid off — Trash Pandas merchandise sales were into the multimillions within a year. Maybe ‘The Washington Football Team’ should put their new name to a vote, too, even if the internet indicates top contenders would be stuff like the ‘Lobbyists’ or ‘Swamp Monsters’.