Can the republic survive?

Our society is marinating in a racialist obsession 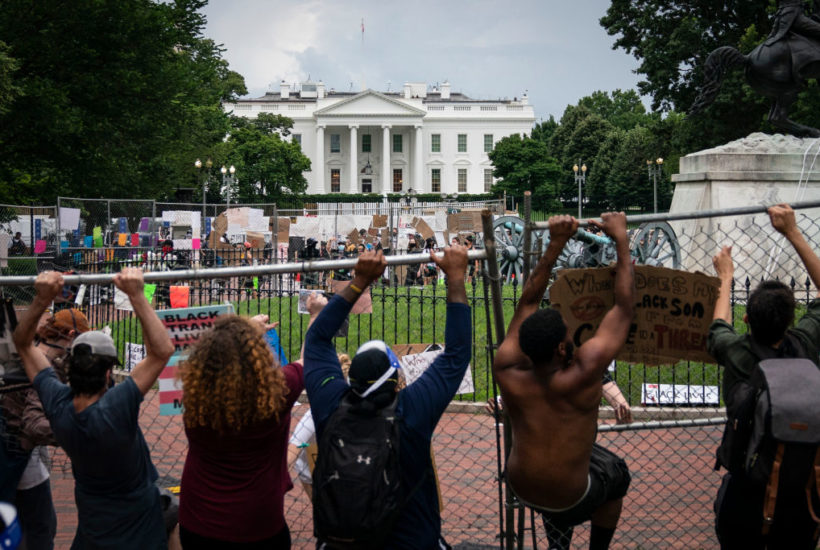 Protests outside the White House

That was Ben Franklin’s famous response when asked, as the Constitutional Convention ended in 1787, what sort of government the delegates had crafted.

Time was, I thought Franklin’s answer droll. But on July 4, 2020, I wonder. A republic depends on the rule of law. The rule of law has been having a hard time of it lately. So: can we keep it?

I have never been tempted to equate the equality celebrated by the Declaration of Independence with egalitarianism. The philosopher Harvey Mansfield was obviously correct, I believe, when he spoke of the ‘self-evident half-truth that all men are created equal.’

Differences in talent, disposition, family situation, and plain dumb luck inevitably result in differences in achievement. As James Madison put it in Federalist 10, the rights of property originate in ‘diversity in the faculties of men.’ Protecting those faculties, he said, ‘is the first object of government.’

Hence the conclusion that the ‘self-evident truth that all men are created equal’ is, from one perspective, really a ‘half-truth’. If you are smarter, stronger, richer, or more beautiful or virtuous than I, there is an important sense in which we are not equal.

But what about the sense in which we are equal? That sense is embodied in the virtues of disinterestedness and impartiality, the unbiased discernment of truth. It is symbolized, for example, by the statue of Justice adorning our courthouses, blindfolded, and holding a scale to declare her allegiance to law, not men. It is implicit in Martin Luther King Jr’s observation that what matters is not the color of our skin but the content of our character.

The entire premise of ‘Black Lives Matter’ is antithetical to the aspirations of equality in King’s hopeful sense. Indeed, with its angry codicil that asserting ‘All Lives Matter’ is impermissible, the BLM movement is an inversion of King’s message, just as it is an affront to the ideal of impartiality on which the rule of law depends.

But the attack on that ideal long predates the BLM movement. It is woven deeply into the culture of repudiation that fueled the radicalism of the 1960s and undermined the humanistic tradition that, once upon a time, our universities existed to foster and hand down.

The cultural critic Christopher Lasch diagnosed it with great clarity. ‘A misplaced compassion,’ he wrote in his posthumously published book, The Revolt of the Elites, ‘degrades both the victims, who are reduced to objects of pity, and their would-be benefactors, who find it easier to pity their fellow citizens than to hold them up to impersonal standards, attainment of which would entitle them to respect.’

Lasch, old-fashioned liberal that he was, understood that embracing democracy does not entail a debasement of standards. Equality, rightly understood, requires a respect for impartial canons of achievement.

This insight lay at the center of Matthew Arnold’s Culture and Anarchy. ‘Culture,’ as Arnold regarded it, ‘does not try to teach down to the level of inferior classes… It seeks to do away with classes; to make the best that has been thought and known in the world current everywhere.’ Hence it is, Arnold wrote, that ‘the men of culture are the true apostles of equality. The great men of culture are those who have had a passion for diffusing, for making prevail, for carrying from one end of society to the other, the best knowledge, the best ideas of their time.’

Today, of course, the contention that some ideas are better than others — let alone that some deserve to be called ‘the best’  — is rejected as an elitist crime against ‘diversity.’

The cult, the ideology of diversity — what we have baptized as ‘identity politics,’ which represents the systematic rejection of everything connected with impartiality and objective, impersonal standards — is the enabling presupposition of the destructive cauldron of racialist obsession in which our society is now marinating.

The irony, as Allan Bloom understood, is that our current intolerance is the perverted progeny of the primary liberal value of openness. It used to be, Bloom noted in The Closing of the American Mind, that openness was ‘the virtue that permitted us to seek the good by using reason. It now means accepting everything and denying reason’s power. The unrestrained and thoughtless pursuit of openness…has rendered openness meaningless.’

‘A republic, if you can keep it.’ What I once thought of as a quaint, half tongue-in-cheek caution, I now see as an earnest admonition. July 4 commemorates not only America’s independence from Great Britain, but also its assumption among the powers of the earth of a form of government dedicated to the proposition that all men are created equal. Our society’s recent descent into tribalism is sharply at odds with that experiment in aspiration. It’s time we grew up and embraced the wisdom of our Founders.

This article was originally published on RealClearPolitics.