Why escapism is better than utopianism 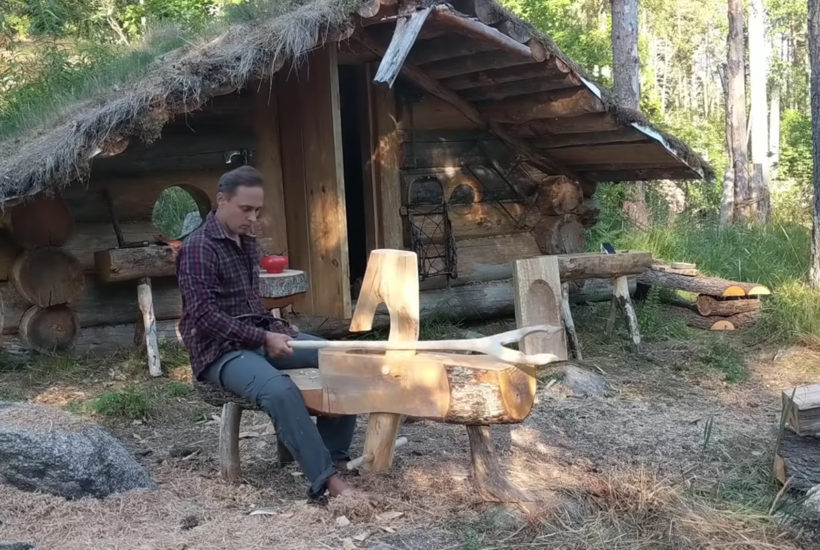 In the evenings, when I want to relax, I watch a Russian named Max build a log cabin. Max is, I suppose, a YouTuber. The log cabin is found on the remote shores of Lake Ladoga, the largest freshwater lake in Europe. The lake was created 40,000 years ago, when a meteorite made landfall between what is now St Petersburg and the Finnish border.

Max is a lawyer but his videos are about bushcraft. Years ago he bought a parcel of land near the lake and became a slavic Robinson Crusoe. His dispatches have names like 21 Days Alone in The Northern Wilderness and Two Chainsaw Secrets and Bear-Proofing My Log Cabin. I did not seek Max out. I left YouTube playing and returned to find him on screen, calmly narrating the day he built an overflow valve for his dam.

In the last few weeks these videos began to powerfully resonate with me. By sudden degrees half the world appeared to be going nuts: first the lockdowns, then the protests, now the heckles and jeers of the revolution. I felt the strong desire to climb up a tree and vanish. That’s what Max did. Max vanished into a YouTube account watched by millions of frustrated desk workers. While people snarled about masks, Max built an operational grill inside a fallen tree. While white protesters screamed at black cops, Max was planting walnut saplings. (He said he hoped his grandchildren would see them fully grown one day.) A genius artisan, Max will take a junked tin barrel and make a forge from it, or construct a kayak out of the most unpromising twigs.

Every now and then, Max looks at his camera, surrounded by the vitamin greens and milky blues of the perfect world he’s made for himself. He smiles: he knows he’s made it. Max created something most of us secretly desire to have. He carved out an autonomous zone of his own. Far away from the cacophony of civilization, he dwells in a kingdom of silence.

Away from the fresh, raw environs of Lake Ladoga, the only silence contemporary culture seems to understand is the political idea that ‘silence is violence’ – that is, if you aren’t ‘speaking out’ against racial injustice, you are complicit in the brutalization of minorities. This is odd because the progressive movement is all about silence as a verb — silence the crowd, silence the opposition, silence the dissenters. Silence was first used that way in 1598 as the Reformation was going about its work in Europe. Our own reformation is about scolding rather than God, but it knows how to wield silence the verb. It does this, ironically, with a great deal of noise. ‘Language most shows a man: speak,’ said Ben Jonson, ‘that I may see thee.’

The language used by the burgeoning ‘anti-racist’ movement in the last few weeks shows more than its adherents realize. They speak from up high, ex cathedra: I want you to do the work… It is not my job to educate you… I am exhausted… This [blatantly real thing] is not real… Abolish the police… ‘Even the most liberal, well-intentioned white person has a virus in his or her brain…’ What explains their hauteur, their prim tone, their anti-joviality? It’s not merely that they’re angry about racism. They sound like a cross between Jim Jones and a music star berating some frightened assistant backstage at the Grammys. Sometimes they sound like they’re delivering formal declarations of war, with the awesome majesty of a state behind them.

Like states of the past, they use the iron logic of conscription. Non-participation in this moment is frowned upon. With great platforms come great responsibilities, after all. Is not having an opinion allowed? Is it OK to look at the revolution and say: no, I’m going to sit in my shed and whittle for five hours…probably not. Silence is violence after all. Or are words violence? Or is clapping violence? Do you stay in your lane or do you post anti-racist reading lists on Instagram? Who knows? Asking for consistency from our delirious jacobins is like pouring 10 gallons of rum down an elephant’s throat, arming it with a .22 rifle, and expecting it to hit the bullseye on a dozen targets. The times are ruthless, arbitrary: you can be sacked if you say something; you can be sacked if you say nothing. Either way the object is the same — shut up and talk, but be sure to say nothing at all.

When the institutions that used to exist to provide common ground are booby-trapped, it’s no surprise that fantasies of escape are everywhere. Elon Musk’s space missions. Kanye West’s Wyoming Ranch. The Seasteading movement, and everything Peter Thiel does. The so-called ‘Black Forest Rambo’, armed with a bow and arrow, who recently eluded the German police during a six-day manhunt. His mother said: ‘he wanted to escape into nature, to be free.’ So do all those preppers, the ‘intentional communities’ proliferating all over America. More consequential than its actual content, the title of the most applauded movie of the last four years was telling: Get Out. America is ripe for a disintegration, argues F.H. Buckley. Left or right, many seek an exit.

There was an embryonic stab at secession this year. A baby step towards breakup. That’s what Seattle’s CHAZ was — another stab at American Utopianism. ‘Many thoughts are there all the time,’ says Kirillov in Dostoevsky’s Demons, ‘and suddenly become new.’ What was new about the CHAZ was the dissemination of its tragedies in real time, online. But the American desire to escape from America, within America, is so old that it’s practically tradition.

Inspired by the ideas of Charles Fourier, Robert Owen, Saint Simon, and Edward Bellamy in the 19th century, the United States, with its cheaply available land, nursed all sorts of experimental communities. There were hundreds of them over the decades, taking up thousands of acres, and involving hundreds of thousands of people. They believed that institutions corrupted men, who were essentially good. Armed with theoretical models of society, they set to work building unoccupied landscapes. People came from over the oceans to the new world, giving up everything, to chase this idea. It was not a romantic move. It was a stern endeavor, with obvious limits, and pratfalls lying in wait. The utopian socialists of that time, like the leaders of the CHAZ this year, thought they understood the world more. If they gave themselves up to their idea, without limit or compromise, their example would yield a contagious new form of civilization.

The American utopias, like all utopias, fail. The imaginary models of society do not take into account fires, fevers and typhoid. Or debts, or conflicts between classes, genders and religious denominations. Sweet collectivity degenerate into sour disputation. The innumerable little communities faded out in a slew of lawsuits, without leaving so much as a working farm behind.

Striving to expose the deceits and flaws and vices of men as socially constructed, they exposed them as inherent, even indestructible. Perfect futures, it turned out, can never be won, only destroyed. The only joy, or comfort, is in escape, in silence. Silence isn’t violence. It’s the only way to elude the madness of humanity.