I’ve always thought western society was terribly ageist, and I don’t just mean ‘showbiz’ folk but across the board 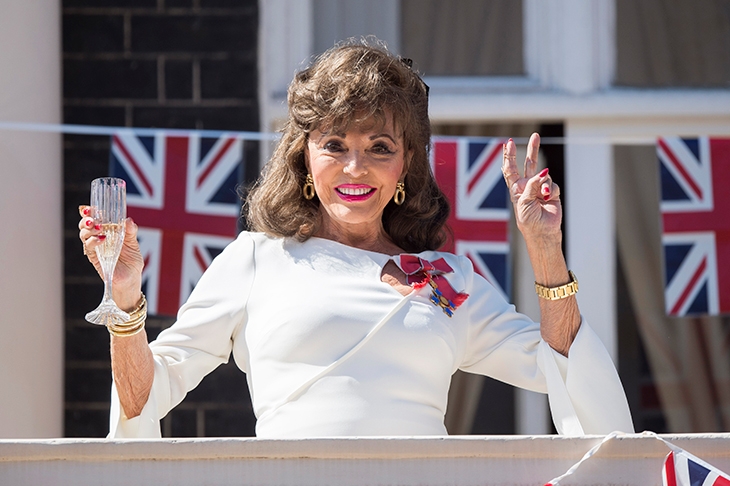 Entering my 54th day of quarantine, I recall how much I was looking forward to this spring in England. There were so many exciting events and celebrations planned. Several friends were throwing big birthday bashes; I was picking up a couple of awards, performing my one-woman show, going to Cannes, and most exciting of all, participating in a plethora of events surrounding the VE Day celebrations. All of the above have gone with the proverbial wind, except for, in a small way, the latter. The Queen’s Pageant Master, Bruno Peek, asked me if I could lead the nation’s toast to our heroes and heroines of the second world war.

VE Day dawned sunny and hot. Percy and I festooned the balcony with Union Flags and bunting, and at 3 p.m. I went out to face a battery of photographers down in the street. I made a short speech and Percy popped a bottle of Pol Roger. Since several neighbors and a few friends had come to commemorate with us, we went outside to join them, maintaining the two-meter rule (even though we’re the only country that demands such large distancing). We enjoyed a mini ‘street party’, laughing and joking, and for a happy hour forgot about the devastating times we’re living in.

As an actress I’m quite accustomed to enforced periods of idleness; for most actors it’s normal to be out of work most of the year. So I’ve managed to fill this boring ‘Covidacation’ quite well: four newspapers, three cups of coffee and two morning chat-shows kill quite a lot of time. But I have to admit it is now becoming paralyzingly tedious. I miss my children and grandchildren, the camaraderie of friends, and going to theaters, shops, cinemas and restaurants. Zoom, FaceTime and Houseparty just don’t do it for me. They are frustrating because everyone talks at once and the broadband usually crashes, freezing faces in bizarre expressions or distorting voices into banshee groans.

I’ve always thought western society was terribly ageist, and I don’t just mean ‘showbiz’ folk but across the board. Then the UK government insisted the ‘over-seventies’ (horrible expression) were part of the ‘vulnerables’ (an even more horrible expression) and should remain in lockdown (the most horrible expression of all) until a vaccine is found. That was utter discrimination against the hardy individuals who have no health issues. But more harmful was bolstering the existing belief among the general public (and prospective employers) that the old should keep out of everyone’s way. Just before lockdown we were planning to have dinner with Piers Morgan and when I texted him to check if it was still on, I received a manifesto explaining that he ‘didn’t want to be responsible’ for my untimely death! The 88-year-old actor who plays Ken Barlow in the British soap Coronation Street is allegedly barred from work for this same reason. On a recent exercise walk in the park, my dear friend Christopher Biggins was accosted twice by ‘coronags’ yelling that someone of his age should be at home. I am in this ‘over-seventies’ group but, having never defined myself by age, I’m not about to start now. I married a man three decades younger, and at my last check-up my GP said I was ‘stunningly healthy’. I am lucky to possess enormous energy and enthusiasm for life. In fact, my husband is often quoted saying that I had to marry a younger man as my pace would probably have killed someone my own age by now. There are hundreds of thousands of others who feel the same way. Sadly, ageism is the last tolerated prejudice. We are not allowed to refer to people as fat and yet it has now been proven that to be obese (almost one third of the UK population) is one of the major contributing factors in COVID deaths. However, if the government had dared to propose that they too should remain confined it would cause outrage.

Furthermore, the old continue to be the butt of socially acceptable derogatory jokes. A TV doctor recently patronizingly chided us to ‘go back to your bingos and bowls’. If we are not allowed to mock anybody else, why should the old have to put up with it? And this patronizing insult of isolation, well-intentioned as it may be, is the final straw on top of all the ageist abuse I’ve received since I was 40! I will not be chucked on to the scrap heap of life — like a little lamb to the slaughter — because of my age; and neither will many of my friends. An American girlfriend texted me: ‘Is this our reward for taking care of ourselves and living into our eighties?’ It’s time, with mask and gloves at the ready, for the Silver Tsunami!