If Richard Dawkins loves facts so much, why can’t he get them right? 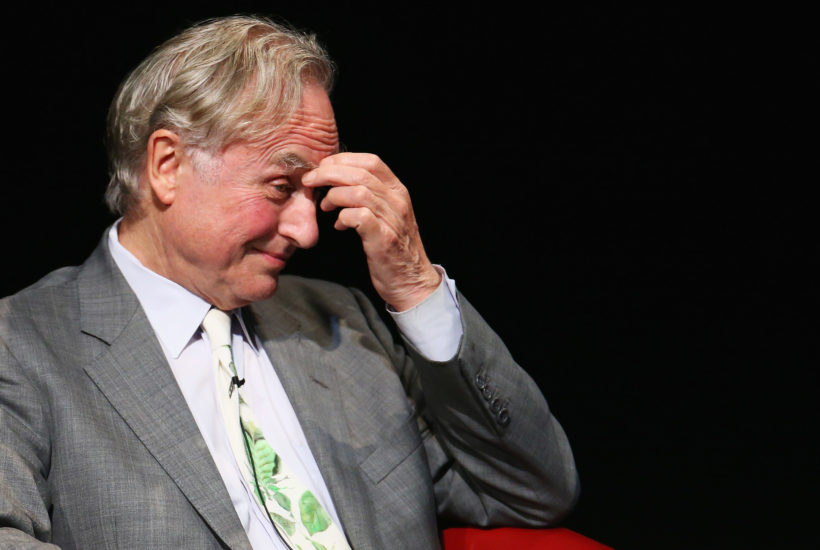 Professor Richard Dawkins has written a book called Outgrowing God: A Beginner’s Guide. Its aim is to save children and young people from belief in the sky fairy. A couple of weeks ago he was plugging it on Channel 4 News. ‘Facts are so wonderful… and such a treat!’, he trilled, sounding not unlike the late Queen Mother.

Indeed. Which is why a thread that appeared on Twitter on Saturday is so delicious. It was written by George Heath-Whyte, a researcher at Cambridge. It begins: ‘Reading @RichardDawkins new book “Outgrowing God”, and as an Assyriologist I’ve had a couple of major face-palms moments.’

In a chapter called ‘Goodbye God’, Dawkins explains that the Old Testament story of Noah comes from a Babylonian myth, the legend of Utnapishtim, which is turn was taken from the Sumerian Epic of Gilgamesh.

It was this discussion that led Heath-Whyte to cover his face with his palms. Unfortunately for Dawkins, he then removed them and started jabbing out a devastating series of tweets. ‘Where to even start?’, Heath-Whyte asked.

‘Well let’s start with “The Utnapishtim story … comes from the Sumerian Epic of Gilgamesh.” WHAT. The version of the Gilgamesh story that contains the flood narrative of Utnapishtim is NOT written in Sumerian, but Babylonian (Akkadian).

‘There are older Sumerian stories about the character Gilgamesh, none of which contain a flood story. There is even a Sumerian flood story too, but it’s not the flood story he’s talking about.

‘… but come on Dawkins, even Wikipedia could have told you that neither of these were written in Sumerian.’

That’s pretty embarrassing for a man who had just told Krishnan Guru-Murthy that he wants ‘to rid the world of all claims that are not evidence-based’. But Heath-Whyte was just getting into his stride.

‘Problem no. 2: “Arguably the world’s oldest work of literature, [Gilgamesh] was written two thousand years earlier than the Noah story.”

‘OK, we know Dawkins has got confused, so maybe he meant to say that some other flood story (there were a few) was “arguably the world’s oldest work of literature”, and was “written two thousand years earlier than the Noah story”.

‘Well, whatever flood story he was thinking of, there is no debate: no flood story was “arguably the world’s oldest work of literature”, and the earliest flood stories currently known were only written down (at the very earliest) 1,400 years before the Babylonian captivity.’

Other mistakes identified by Heath-Whyte: Dawkins mixes up the animals in the Gilgamash and Genesis flood stories, and claims that the Sumerian flood legend, like the story of Noah’s Ark, ends with a rainbow.

‘There’s no rainbow mentioned in any Mesopotamian flood story. Anywhere. There just isn’t,’ says Heath-Whyte, adding that in any case the former Oxford professor for the Public Understanding of Science has misidentified a Sumerian god.

I think we can take Heath-Whyte’s word for it. Not only can he read the cuneiform in which Gilgamesh is written, but he can also write it – he’s carved out a beautiful clay copy of the ‘Flood Tablet’ from Nineveh in the British Museum. The guy really knows how to wield a scalpel.

And, just when Dawkins must be wishing that a non-existent God would send a flood to cover his embarrassment, he delivers the killer blow. As he says, even Wikipedia would have put the professor right on these matters. So what was his source? ‘A quick Google search suggests that Dawkins’ source for a lot of this stuff may be a cute little website called HistoryWiz.’

I checked, and he’s right: this is the version of the Gilgamesh as mangled by HistoryWiz, which invites you to ‘step into the past… Let the wizard take you to a different time’.

Alas, it looks as if you really do have to step into the past in order to consult the wizard. The site is ‘copyright 1998-2008’, there are loads of broken links and the design, c. 2000, is quaintly rudimentary.

Goodness knows where Dawkins acquired his taste for time-travel. Perhaps from his ex-wife Lalla Ward, who spent several years in the Tardis as Doctor Who’s assistant?