A trans woman being refused ball-waxing is no laughing matter 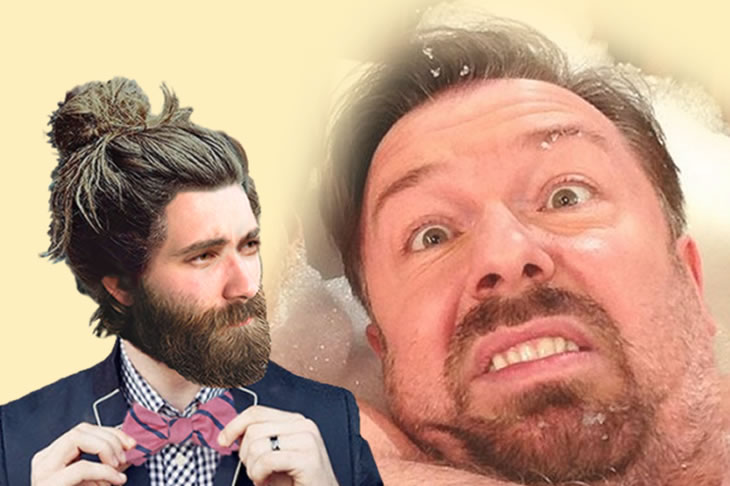 Hey Gervais, here’s that huge pile of attention you ordered…

When ‘Ricky Gervais’ is trending, it’s never for a positive reason. The man is incapable of saying anything kind. On Wednesday he sent out this vile tweet, mocking the trans community:

I was going to dress up as something weird and creepy for my Halloween party, but I’m bucking the trend this year and I’m going as brave female activist Jessica Yaniv. This also means I don’t have to wax my big old hairy balls. pic.twitter.com/ldAvI0b2ot

The subject of this violent attack is none other than Jessica Yaniv, a brave Canadian trans activist who recently, tragically lost her case against several beauticians for refusing to wax her balls. She had battled the legal system for months in order to try and bring about a precedent that would legally force women to perform beautifying treatments on trans women’s genitalia. Sadly, her case was thrown out and ordered to pay $2,000 in damages to each of the three respondents who testified. The British Columbia human rights tribunal also claimed Yaniv had used the law to ‘punish’ minorities she felt were transphobic (none of the women spoke English as their first language, but I am fairly certain this was mere coincidence).

As if this transphobic travesty of justice wasn’t enough, Jessica now has to deal with Ricky Gervais, multimillionaire problematic comedy man, jeering at her from atop his 13.4 million follower Twitter account. If that isn’t kicking a woman in the nutsack when she’s already at her lowest point, I don’t know what is.

Gervais is well known for using humor as a way of getting people to give him money. Very much the same way a playground bully would ruthlessly mock a large child in order to gain favor from his peers (bullies always target children of wider girth as they tend to have more lunch money). Instead of being reported to the police for running this blatant extortion racket however, Gervais is instead rewarded for his efforts. I imagine he often stands at a window in the tower at the top of his huge mansion, gazing intolerantly at all he sees below him. Making a mental list of which marginalized group he will destroy next. Hands on hips, laughing his high-pitched squeal of nastiness long into the night.

I would like to hope that one day he realizes the damage he is doing with his ‘jokes’, but alas I doubt that day will ever come. Despite how many times he is educated by people with their pronouns listed in their Twitter, this only appears to make him more impervious to criticism. Childishly he taunts them, brushing off their lived experiences as if they were naught more than pesky suppertime crumbs falling onto his engorged belly as he greedily devours a gigantic slab of cheese in the bath with his big snarky face.

Instead of doing the morally acceptable thing and apologizing profusely over and over again while the outraged masses refuse to accept his clumsy platitudes and demand he be ostracized from society regardless, he simply mocks them as well. Unbelievable. He actually refuses to take them seriously. As a so-called ‘comedian’ what does he expect to achieve by not giving in to the perpetually offended? For the life of me, I cannot understand what he feels he will gain by not bending over backwards and recalibrating his problematic behavior in order to placate the people who would never pay to watch his shows no matter how many times he publicly says ‘sorry’ to them. It makes literally no sense to me.

So anyway, enjoy the big steaming pile of attention you ordered, Ricky Gervais. I hope it makes you happy (not really, this is sarcasm). Stick your massively intolerant ego-enlarged head into the trough of outrage and snaffle it all up until you puke.