The GOP strategist says Mueller will find ‘no collusion’ on his iCloud...just ‘many excellent pictures of my Nixon tattoo’ 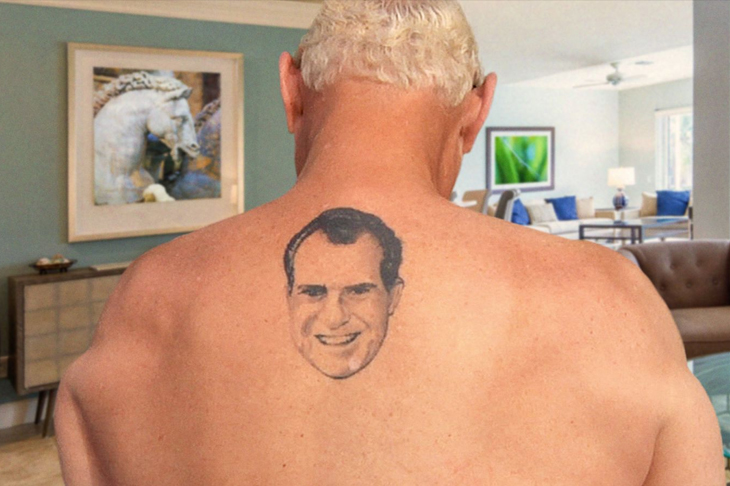 Roger Stone and his Nixon tattoo

Say what you want about Roger Stone, the man has a brilliant sense of humor.

He tells Cockburn that investigators nosing through his iCloud will discover ‘no Russia collusion … they will however find many excellent pictures of Nixon tattoos.’

The GOP campaign adviser said it was ‘incredible’ that Apple has turned over his password to Robert Mueller’s investigation, as claimed by the Gateway Pundit.

Last month, Stone was indicted on seven counts by Robert Mueller, including lying to the FBI and witness tampering. His early morning arrest was criticized for its heavy-handedness. But Stone has seemed relatively unfazed by Special Counsel’s investigation of him. He was just surprised that Apple had supposedly handed over his iCloud details.

‘It’s rather incredible that Apple refuses to turn over the password for the Pulse nightclub killer or the San Bernardino mass murderer in order to protect their privacy rights but is more than happy to turn over my password to Robert Mueller,’ he said.

‘Nothing on my iCloud shows any evidence of Russian collusion, WikiLeaks collaboration or any evidence that I knew about the source or content of either allegedly hacked or allegedly stolen emails. They will however find many excellent pictures of my Nixon tattoo.’

Cockburn is not sure the Gateway Pundit has the details right. Apple has handed over iCloud data before. The difference in the San Bernardino case was that the company was unwilling to make software to unlock phones, which Apple claimed would set a dangerous precedent.

Back in November, Stone’s former friend Randy Credico told Cockburn, ‘The special prosecutor has got everything, it’s obvious they have all the texts. It’s like an episode of Columbo – they already know who did it.’

But Stone believes his case will reveal just how nefarious the deep state is. We shall see. For now, Cockburn, a fan of privacy as readers will know, would like to point out that a man’s iCloud should be his digital castle. God bless Roger Stone for seeing the lighter side…