The mad genius of Rudy Giuliani 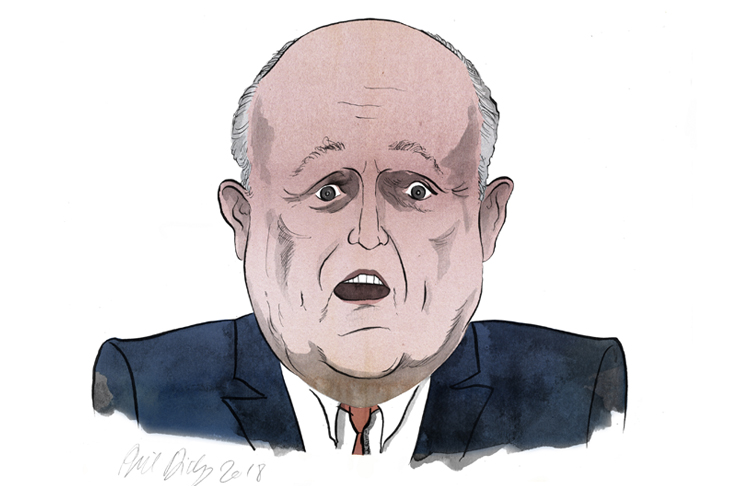 Still, what other administration could turn one of the most-watched Sunday news shows from a dull disquisition on current affairs to a dramatic dialectic on epistemology and metaphysics?

Todd asked Giuliani the questions everyone in Washington has on his mind. Will the President sit down to talk, under oath, with Mueller and his team? Or is Trump’s legal team trying to keep such a conversation from happening?

‘Look, I am not going to be rushed into having him testify so that he gets trapped into perjury,’ said Giuliani. ‘And when you tell me that he should testify because he’s going to tell the truth and he shouldn’t worry, well that’s so silly because it’s somebody’s version of the truth. Not the truth.’

At which point Todd interrupted him: ‘Truth is truth.’ You might think there’s nothing to argue with there. But Rudy Giuliani can argue with anything: He was once a U.S. attorney, after all.

‘No, it isn’t truth. Truth isn’t truth. The President of the United States says, “I didn’t…”’Todd was flabbergasted by Giuliani’s statement. ‘Truth isn’t truth? Mr. Mayor, do you realise what I…’ Todd began, before laughing and declaring, “This is going to become a bad meme.’ Giuliani wouldn’t let Todd display all the drama. ‘Don’t do — don’t do this to me,’ he said, putting his head in his hands. ‘Don’t do “Truth isn’t truth” to me,’ Todd rejoined.

Giuliani then got even more philosophical, drawing his opponent into a Socratic dialogue concerning Donald J. Trump and the FBI director he fired, James Comey. He mused, ‘Donald Trump says, “I didn’t talk about Flynn with Comey.” Comey says, “You did talk about it.” So tell me what the truth is. Maybe you know because you’re a genius.’ Todd actually declared defeat. ‘At that point, you’re right. Under two people, I, no, you’re right. I don’t read minds on that front.’

Needless to say, ‘Truth isn’t truth’ did become a meme, and people all over social media raved about doublethink and George Orwell. The bizarre phrase, it is said, could turn out to be the epitaph for 74-year-old Rudy’s career.

But then, Giuliani, a former New York mayor and presidential candidate, it’s worth recalling, has a genius when it comes to blowing minds: Perhaps that’s why he got the job as Trump’s lawyer.

Almost from the moment he joined the president’s personal legal team in April and began making frequent appearances on Trump’s second-favourite medium — television — his statements have had people questioning his mental fitness.

‘Rudy Giuliani’s Sunday show appearance was a total disaster’ is a headline from CNN this week that could have run just about any time this summer.

But that’s merely CNN’s Chris Cillizza’s version of the truth. Here’s mine: Giuliani actually gave a ferociously funny performance in which he displayed a subtle understanding of ideas deeply held but barely acknowledged by those who regularly roll their eyes at the president’s most savvy spokesman.

For decades, those in the know — or at least those who know better than everyone else — have been turning on its head Socrates’ dictum ‘True knowledge exists in knowing that you know nothing.’ Donald Rumsfeld tried to update this adage when he said that there are ‘known knowns’ and ‘known unknowns’ — and people scoffed at him, too.

Immanuel Kant promulgated the idea that truth is a construct created partly by the human mind. His ‘transcendental idealism’ held that our minds shape what our senses perceive. Space and time are human inventions that give the sensory world its very structure. There is no knowledge — not knowable by us, anyway — that exists independently of the brains that sculpt it as they struggle to secure it. Our brains literally contribute to the creation of what we erroneously think of as ‘the outside world.’ By the 20th century, the notion developed that truth is a construct created by human society, and then issues of knowledge and identity became not just decisive but deadly. If truth is a social construct, how is one way of life—say, that based on Western values of freedom, individualism, and prosperity—superior to another? Why should a person not identify as a gender he wasn’t born into and live accordingly if that’s the truth inside his head? Are reason and science, practiced and championed throughout history mainly by white men, mere tools of colonialism and patriarchy?

That last question brings us back to Rudy. French philosopher Michel Foucault coined the term ‘le savoir-pouvoir’ (‘power-knowledge’) in his work arguing that the two concepts are inextricably linked. Anyone who’s studied literary theory understands this idea; what’s surprising is that Giuliani does too. ‘Let me finish,’ he said to Todd toward the end of their dialogue on the nature of truth, going back to the example of the de facto dialectic between Trump and Comey. ‘We have a credibility gap between the two of them. You’ve got to select one or the other. Now, who do you think Mueller’s going to select? One of his best friends, Comey, or the president who he has been carrying on a completely wild, crazy, unorthodox investigation into?’

Foucault was correct, Giuliani is suggesting. Truth, in the end, comes down to power, and in the case of Trump vs. Comey vis-à-vis Mueller, Comey wields more clout. Just as history is written by the victors, truth is decided by those who control the mechanisms of its creation. It’s not a new notion, but it’s a bold one — coming as it does from one of the most conspicuous conservatives in the country.

Trump detractors and supporters alike have argued that Giuliani’s theatrics harm more than help his client in the most famous legal drama in America. Giuliani shocked the commentariat when he mused on July 30 that collusion with Russia might not be a crime. But Trump clearly approves of Giuliani’s strategy of focusing on the court of public opinion rather than any legal venue; he tweeted a day later, ‘Collusion is not a crime.’ And a day after Giuliani showcased his philosophical chops on Meet the Press, August 20, Trump told Reuters he agreed with his lawyer on the Comey question: ‘So if I say something and he says something, and it’s my word against his, and he’s best friends with Mueller, so Mueller might say: “Well, I believe Comey,” and even if I’m telling the truth, that makes me a liar. That’s no good.’

Giuliani is in fact serving his client well, even as he proves to the American elite that its cherished, politically correct beliefs lead only to absurdity — or worse. Despite this week’s bombshells, he just might succeed — polling suggests it’s already happening — in convincing regular Americans, the ones who vote, that Mueller’s more-than-year-long probe is not worth the money or the mania.