The ‘Russians’ of Brighton Beach

The attitude of Jewish ‘Russians’ in America toward Russia is goodbye and good luck. But mostly goodbye 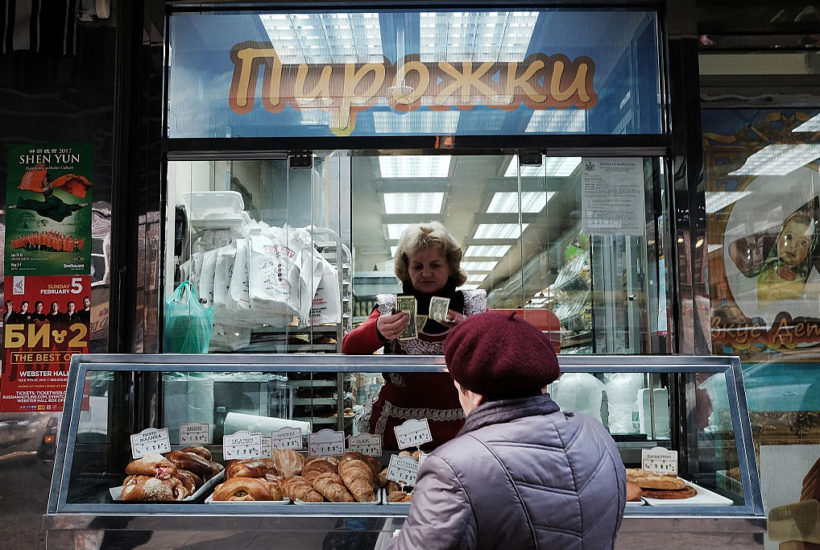 At the very southern tip of Brooklyn, far from the hip avocado cafés and right before you hit the sea, there sits the neighborhood of Brighton Beach. Nicknamed ‘Little Odessa’ after the waterfront city in Ukraine, the area is home to primarily Russian-speaking immigrants from the former Soviet Union.

It’s a jumble of identity. The immigrants are mostly Jews from Ukraine, hence the nickname, but also Russia, Belarus and the other Soviet republics. So what to call these people in America?

In Russia, in Ukraine, in Belarus, our identity cards never described us as Russian, Ukrainian, Belarusian. We were just Evrei, Jews. Here, we’re all just ‘Russian’. No one bothers with distinctions. What are you going to do? Explain that you’re from Georgia — no, not the peachy Southern state — but you were never Georgian and your first language is Russian? It’s too complicated.

What’s not complicated is how overwhelmingly the ‘Russians’ of Brighton Beach support Donald Trump. In 2016, Trump won only two assembly districts in Brooklyn. The district encompassing Brighton Beach and nearby Russo-thick neighborhood Sheepshead Bay was one of them. But anyone pointing to the ‘Russia collusion’ story as evidence of that love has it exactly wrong.

In 2017, ‘Mr Trump’s Russian Base Beyond the Kremlin’, a New York Times column by then-editorial board member Francis X. Clines, attempted to tie the ‘Russians’ of Brighton to the Russians of their fevered Trump collusion dreams. To suggest the people of Brighton have something in common with the Russians actually in Russia is a flimsy line. Even the Times piece admitted it in the final paragraph:‘“Listen,” Mr Rubinsteyn said amid the buzz in his cafe. “People I know a long time from Russia, they don’t care what’s going on in Russia,” he said of forgiving and forgetting the old world. “I wish Russia the best.”’

That’s the general attitude of Jewish ‘Russians’ in America toward Russia. Goodbye and good luck. But mostly goodbye. The error is in writing about the insular world of Brighton without experiencing it — and no, a stroll on the boardwalk with a stop-in for kvas doesn’t count.

Yes, Brighton Beach is a land frozen in time. The wave of immigration began in the Seventies, after pressure from Jewish groups led to Jews being allowed to leave the Soviet Union. Most came through Italy, with some through Austria, and they headed for America, Israel, Canada and Australia. Brighton Beach saw the bulk of the American immigration.

The immigrants of Brighton Beach had children and those children lived their American dream. They grew up and became doctors, lawyers, businessmen. Flush with cash but with a strong pull toward home, they invented a new Brighton Beach. Buildings went up featuring million-dollar apartments. Then two million, three.

Those children still teach their children Russian as a first language and spit sunflower seeds on the boardwalk. The signs on the shops are still in Russian. It’s easy to imagine that the people who live this foreign lifestyle with their flashy clothing, Vegas-style cabaret at restaurants, the smoking — my God, the smoking!— are still tied to their old identity. But the overwhelming mindset of this community was once summarized on bumper stickers in the Heartland: ‘America, Love It or Leave It’.

When Trump tweeted at ‘The Squad’ (Omar, Ocasio-Cortez, Pressley and Tlaib) to ‘go back’ to their countries of origin, he was roundly denounced as racist. To the ‘Russians’ of Brighton Beach, this was perplexing, as they regularly say that to each other in Facebook groups when someone criticizes America too hard. It’s not about race, silly: it’s about patriotism. If you don’t have the good sense to appreciate what you’ve got, you don’t deserve it and should leave. The locals here can tell you how much worse it can be.

What’s worse, this time, is that Ukraine’s president, Volodymyr Zelensky — the one Donald Trump spoke to on the phone and either did or did not pressure to investigate his opponent Joe Biden — is Jewish. This time it’s less them and us and countries left long ago. This time the ‘Russians’ of Brighton wait for something more insidious, something very familiar. For so long it’s been ‘those Russians’ and the interference in our election. How long before it becomes ‘those Jews’ — those zhids always interfering with our operations?

The Russians of Brighton Beach are bracing themselves for the next wave. Their history is one of running when the neighbors, the Cossacks or the Germans come for the Jews. But for now at least, they get to sit at the famous Tatiana restaurant on the Brighton Beach boardwalk, drink their vodka, eat their selyodka and look out to sea like real Americans.