Somewhere on the rebound from the tough-on-crime 1990s, criminal law lost its teeth 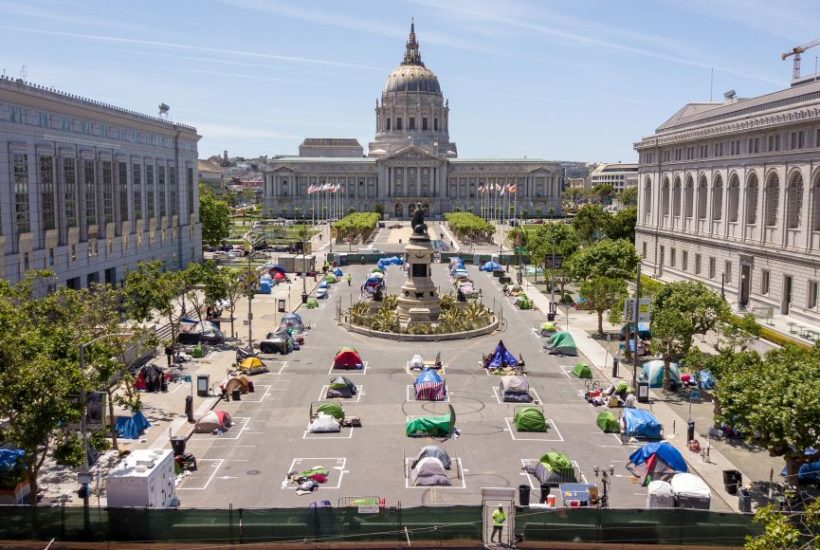 District Attorney Chesa Boudin personifies everything that’s wrong with San Francisco: weak on drugs, weak on crime, weak on racist assaults and weak, even, on the trafficking of minors. Some say that’s why the campaign to recall him is gaining momentum. Others counter that he doesn’t even matter.

Boudin is a son of not one, not two, but four domestic terrorists. His biological parents went to prison for a Brink’s robbery when he was one, surrendering the boy to their Weather Underground bosses Bill Ayers and Bernardine Dohrn, to raise right. The Baby Underground grew up, got a Rhodes scholarship, completed a law degree at Yale, and went to work for the Venezuelan socialist dictator Hugo Chavez. Then, in 2019, he won the special election to become San Francisco’s District Attorney, promising to go after landlords, corporations and cops, ‘not simply prosecute whoever the police arrest’.

In a Jacobin interview Boudin described himself as a part of a movement, backed by none other than George Soros, to stop enforcing American law on American land, and go after class enemies instead.

San Francisco has been going down the rabbit hole of law non-enforcement for a long, long time. In the late 20th century the article of faith for all proper thinking individuals — and San Francisco is the hub of proper-thinking individuals — was that the war on drugs was a failure, and that the right approach was legalization, harm reduction and voluntary treatment for those who are ready to enter it.

For decades rumors swirled that when the police arrest street-level dealers, the judges simply dismiss the cases. Instead of rooting out the drug trade, cops’ mission has been reduced to confining it to the Tenderloin neighborhood. This is the cultural and political heart of the city: low-income housing, along with the Opera, the Symphony and the City Hall.

In the 2010s, the opioid epidemic swept the country. Drugs become increasingly abundant and stronger: Alaskan marijuana, fentanyl, Mexican meth. And as the wealth of the second dot-com boom crowded out the middle class, junkies floated to San Francisco from around the US. San Francisco became both expensive and unlivable, but the homelessness problem was written off as an economic issue even as it became increasingly obvious that we are living through a mental health and addiction emergency.

Twitter made legalization by judicial fiat impossible to hide. SFPD Tenderloin Station began uploading the mugshots of those arrested along with the pictures of cash and illicit substances found on them, and how many times each one has been apprehended. To be fair, not all of the arrestees were cartel. Some of them were the ‘homeless’, holding the money and baggies for dealers in exchange for drugs. Still, the truth about the Tenderloin was brought into the daylight. The San Francisco Chronicle noted that out of 883 drug sale arrests in 2017-18 fiscal year, only 32 resulted in sentences in county jail, and even then there was no information available on how much time was served.

Somewhere on the rebound from the tough-on-crime 1990s, criminal law lost its teeth. Much of the current chaos is attributable to Propositions 47 and 57, passed by voters in 2014 and 2016 respectively. Both were reactions to the Three Strikes Law and the ‘failed war on drugs’, and were sold as measures designed to undo ‘mass incarceration’. Proposition 47 reduced penalties for many criminal offenses, including drug possession. Prior to passage of Proposition 47, drug possession was a felony. Under the threat of a prison term, addicts were encouraged to opt into a rehabilitation program. Under the new law, addicts, if caught, receive a misdemeanor ticket, and are potentially liable to a month or two in jail at most. The immediate incentive to enter treatment has been withdrawn. The Prop 47 regime reduces theft under the value of $950 to a misdemeanor, enabling low-functioning addicts to support their habits by crime.

Prop 47 and Prop 57 allowed for early release of tens of thousands of prisoners, many of them violent and poorly prepared to re-enter society. Then California opened its jails as the COVID epidemic began. As a result, the city’s homeless population exploded by nearly 250 percent. The only solution City Hall could come up with is housing the homeless in the now-empty hotels, a scheme that so far has resulted in nearly an overdose a day, as well as assaults and other crimes at the shelters.

The likes of woke propagandist Robin DiAngelo like to admonish the bourgeois to give up their security and comfort for justice and racial equality. Is, then, Boudin’s San Francisco some sort of exemplar of the maybe dangerous, but otherwise harmonious society the woke left wants?

Well, no. In January this year Boudin dismissed all charges against the man caught trafficking a 13-year-old (hello #MeToo). In March, the District Attorney withdrew charges against a man suspected in a shocking black-on-Asian hate crime. Several attackers recorded themselves assaulting an elderly recycler, one of them yelling ‘I ain’t helping him, I hate Asians nigga.’

It seems counterintuitive that in 2020, ordinary people can get canceled for an awkward word or insufficient enthusiasm for wokeness, while a perpetrator can get away with the ‘restorative justice’ model despite committing the very definition of a hate crime. Perhaps Baby Underground, whose dad remains incarcerated, has his own unresolved issues.

Boudin is a sad excuse for a District Attorney, and he should definitely be recalled. Yet San Francisco’s — and California’s — problems did not begin with Boudin, and they won’t end with him, either. A future District Attorney needs to have meaningful criminal laws to enforce, and the city needs judges willing to convict criminals.