The BLM brigade has no time for dissenters 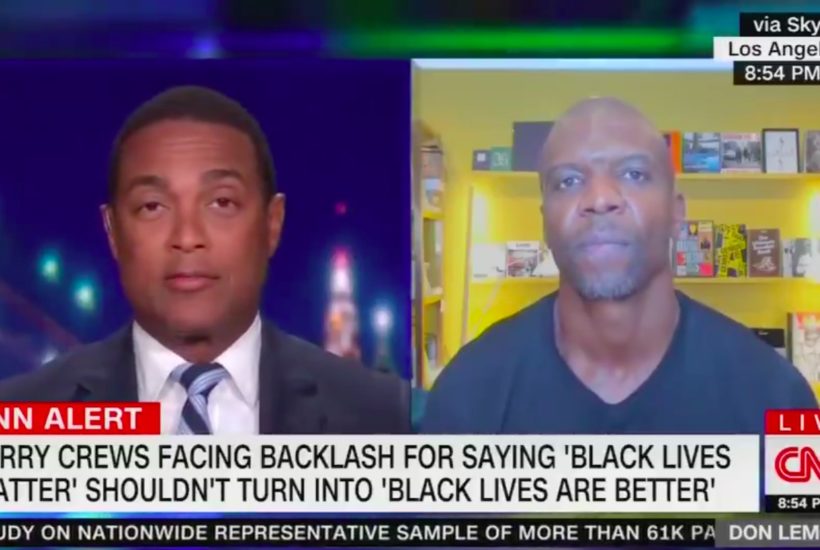 Actor and comedian Terry Crews is taking heat for criticizing the Black Lives Matter organization over its tendency to hone in on police brutality and ignore far larger issues in the black community. He recently tweeted that he wants to make sure ‘black lives matter’ doesn’t turn into ‘black lives matter more’. Predictably, he was met by reactionary shrieks of ‘Uncle Tom’ and ‘coon’.

Crews appeared on CNN on Monday night to explain his objections to BLM, and instead received a lecture from Don Lemon about the grievous errors in his line of thinking. After informing the movie star that he has ‘skin as tough as an armadillo’ thanks to his soapbox at CNN, Lemon informed Crews that ‘if you want an All Black Lives Matter movement that talks about gun violence’, then he should ‘start that movement with that name’.

"What I was issuing was a warning," Crews tells CNN's @DonLemon. pic.twitter.com/atspQswUEN

‘The Black Lives Matter movement is about police brutality and injustice in that manner, not about what’s happening in black neighborhoods,’ Lemon said smugly.

Crews tried to explain that the Black Lives Matter movement is no longer solely about police brutality, as the organization’s own website admits, but was repeatedly interrupted. Lemon, of course, had to keep his viewers from hearing the truth: that an organization purportedly dedicated to making black lives matter only actually cares about some black lives.

According to a database compiled by the Washington Post, only nine unarmed black people were killed by police in 2019. At least half of those incidents occurred after the unarmed individual attacked the police officer on the scene. This figure hardly compares to the thousands of African Americans affected by violent crime, largely perpetrated by other African Americans.

As a matter of fact, between recent crime waves in major cities and innocent black folks like David Dorn losing their lives in the wake of riots and looting, BLM and the related #DefundThePolice movement may be responsible for many more than nine deaths by the end of the summer. An eight-year-old girl was shot to death over the weekend in Atlanta near the Wendy’s wear Rayshard Brooks was killed.

BLM’s hypocrisy doesn’t end with claiming to want to lift up black people while ignoring interracial crime. The organization is also against one of the most proven ways to reduce poverty and violence: fatherhood. Black Lives Matter explicitly opposes traditional two-parent families: ‘We disrupt the Western-prescribed nuclear family structure requirement by supporting each other as extended families and “villages” that collectively care for one another, especially our children, to the degree that mothers, parents, and children are comfortable.’

Even the progressive left’s radical gender ideology seems to be more important to BLM than reducing violence and providing stable homes for black children. ‘We affirm the lives of Black queer and trans folks, disabled folks, undocumented folks, folks with records, women, and all Black lives along the gender spectrum,’ the organization also says on its website.

Like the leaders of Black Lives Matter, prominent politicians are failing to take responsibility for the uptick in crime over the past several weeks. Just as Don Lemon attacked Terry Crews for mentioning negative trends outside of police brutality, Mayor Lori Lightfoot of Chicago shifted the blame onto firearms: ‘Tonight, a 7-year-old girl in Austin joined a list of teenagers and children whose hopes and dreams were ended by the barrel of a gun.’

Crews perfectly captured this phenomenon in another one of his recent tweets, writing, ‘There are “gatekeepers of Blackness” within our own community who decide who’s Black and who’s not. I have often been called out for not being ‘black enough.’ How can that be?’

Welcome to 2020, Mr Crews. Anyone who questions the far-left agenda of groups like BLM will be shut down, black or not.