The mind of Donald Trump, as explained by Anthony Scaramucci

When Anthony Scaramucci announced that he was writing a book about his time with Donald Trump, the joke was that… 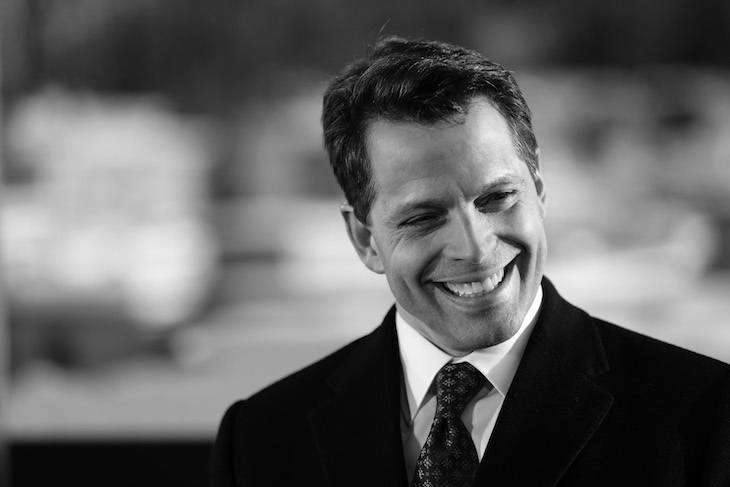 When Anthony Scaramucci announced that he was writing a book about his time with Donald Trump, the joke was that it should be entitled ‘Ten Days That Shook the World’. This, he says, does him an injustice because he managed 11 days as White House communications director before being fired — after a lava flow of stories that seemed extraordinary even by Trumpian standards. But he remained loyal to the President, and has been speaking in his defence ever since. This book promises to reveal one of the deepest mysteries in American politics: how Trump’s mind works.

‘I’m almost done with the manuscript,’ he says, fresh from a meeting with his publishers in New York. ‘Obviously, my short stint in the White House won’t be a major drama. The book will be about the President’s personality. Almost like a disc-operating manual: how the President thinks, how he works, what he likes to do stylistically. About his negotiation style, trade policies, where he stands politically. And why he’s going to continue to beat the pants off of his political adversaries who still haven’t figured him out.’

Those who rail against Trump, he says, play straight into his hands: he loves to wind up his detractors so they lose their composure. He offers an example: a presidential tweet last week referring to costs being ‘bourne’ by the American taxpayer. ‘There are actually people in the media who think he doesn’t know how to spell the word “borne”. They don’t realise that he’s trying to light their hair on fire, he’s trying to incite them.’ They rise to the bait every time, he says. ‘When he says that “My button is bigger than your button and my button works”, they don’t appreciate the angle that he’s approaching them from.’

He sees this as Trump’s great gift, his superpower. The President is not a great reader, and is said to struggle with autocues. Others have speculated that he might suffer from undiagnosed dyslexia. But Scaramucci argues that, just as some blind or deaf people have a heightened sense of smell and touch, Trump has compensating powers over the spoken (or tweeted) word. That he can dominate the news agenda with a few outlandish phrases, allowing him to reach millions of Americans directly. And becoming, as the Mooch puts it in the title of his forthcoming book, ‘the Blue-Collar President’.

Scaramucci is the archetypal Wall Street slicker: a 54-year-old millionaire with a taste for the high life — and the spotlight. When he was appointed White House communications director, he became a one-man fountain of headlines. On day two, his estranged wife gave birth to their son (it emerged that she had decided to divorce him a few weeks earlier). He vowed to purge anyone caught leaking (‘I’m going to fire everybody’), yet the next day called a reporter to denounce his White House rivals in the most colourful terms. He thought it was off the record but it was written up with no expletive spared. His mistake, he tells me, was to speak candidly to a journalist whom he had regarded as a family friend. And to ‘throw a couple of curse words in’.

He is still deeply wary of journalists. We first met last autumn, and I’ve been pressing him for an interview ever since. I was interested not so much in his now familiar tales of mishap but his theories about what method lies behind the Trump madness, and the forces that took him to power.

His story starts with his father, a former crane operator in Long Island, who earned enough to give his family a comfortable upbringing. But this job, he calculates, now pays about a third less in real terms than it did back then. ‘My parents were in the aspirational working class,’ he says. ‘Similarly situated people now feel like they’re in the desperational working class.’

Only two candidates at the last US presidential election understood the depth of this despair, he says: Trump and Bernie Sanders. And only one of them made it to the ballot paper. ‘I saw this billionaire living in a glass tower next to Tiffany’s who was somehow in direct touch with people I grew up with. I thought it was fascinating,’ he says. ‘If I was to be critical of myself, I had been steeped in too many China World Economic Forums, hanging around in an echo chamber of confirmed biases. Talking to super-smart people, but after a while you start to disconnect from neighbourhoods like the one I grew up in.’

Almost all of Trump’s rivals, he says, suffered from this disconnect. ‘They were using a 35-year-old playbook of American politics. Homogenising their language, not paying close attention to what was actually going on in the middle of America.’ And what was going on, he says, was the failure of an economic system — which had started to threaten the political order. ‘If you look at world history, you see that democracy has been a fragile experiment. Pericles and the founders of Athenian democracy were trying to empower people only in order to prevent their revolt. Today we have these high ideals — say the words of Locke, J.S. Mill or Thomas Jefferson — but the political rights we talk about are founded on economic principles. When people are feeling economically desperate, they will call for change.’ Trump, he says, is the vehicle of this change.

‘You also have to understand that disposable income in the US is up. Businesses feel better, there’s more buoyancy and optimism in the business community, there’s greater job creation, you’ve got very low unemployment numbers,’ he adds. ‘Americans have classically and typically voted with their pocket books. So this is a guy that will be impossible to beat, I think, at the time of re-election.’

Trump’s recent threat of tariffs on Chinese products, he says, will also be good for the American worker. I ask how a Goldman Sachs banker and a believer in free markets can be comfortable with protectionism, and the notion of a trade war.

Scaramucci doesn’t see it as a trade war. ‘Long ago, the United States made a decision that goods and services would flow freely into our country if they were from the developing world, but we accepted higher levels of tariffs on goods flowing from us to them. So you had uneven trade deals, and we called it free trade,’ he says.

‘China entered the World Trade Organisation as a developing nation. Eighteen years later, I’d say China is a fairly developed nation. Its economy is the second largest in the world. All the President is saying is that this strategy, this imbalance, has had the effect of hollowing out the American middle and lower classes. It has definitely diminished wages in the US, and created a rust belt. We’ve lost 70,000 or 65,000 factories since the signing of Nafta, and so all the President is saying is that we need symmetry in these deals now. We need to protect the American worker.’

So he sees Trump as a man of trade peace. ‘The move Xi made is indicative of that, because it sends a message that he’s ready to abort a trade war. That would have never happened under Obama or under a new Clinton administration, so you have to give the guy some credit, right? And by the way, look at the negotiations on North Korea. I predict that there will be a very satisfactory outcome there as well.’

What about Syria? Here, Scaramucci isn’t quite so confident. In general, he says, Trump is disinclined to use the military. ‘He may be abrupt in his negotiating style but he wants a diplomatic solution over everything else.’

I put to him that Bashar al-Assad might have carried out the chemical weapons attack on precisely this assumption, betting that Trump would fire a few missiles, then leave him alone to continue the slaughter. ‘Yes, that’s probably what he’s thinking.’ Is that a problem? He won’t say. ‘It’s easy to be critical from a distance. But I’m way less critical of our public officials than I was 15 years ago,’ he says. ‘I now have more appreciation for what they’re going through.’

Being sacked didn’t affect his friendship with Trump, he says. ‘I’m a big boy. I’ve been fired before. There are people that I have fired that I have wanted to keep a good relationship with.’ And he sees certain upsides to the whole drama. ‘The President made me as famous as Melania and Ivanka — and I didn’t have to sleep with him or be his daughter. So it’s all good.’ And it will be even better once he completes the sale of SkyBridge Capital, the $11 billion hedge fund that he founded.

And would he go back to the White House for a second time? He’d never say never, but sees no possibility of his being asked. ‘I think that I had a voice that could have really helped the President long-term. But c’est la vie.’