The Trump inauguration speech that wasn’t 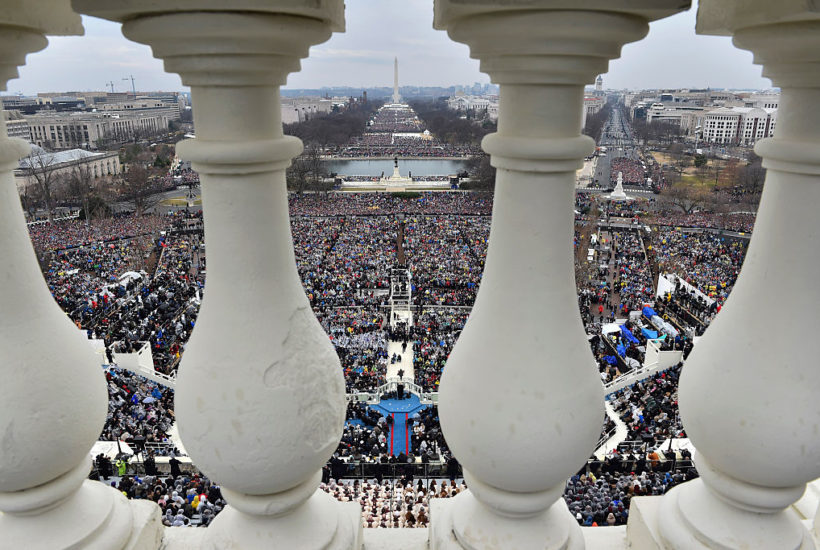 Over the course of 2016, together with my wife and the sainted Bob Tyrrell of the American Spectator, I wrote several campaign speeches for Donald Trump and his family. They were well-received, and in December of that year, at the suggestion of Stephen Miller, I prepared an Inaugural Address for the president-elect.

The American president is the country’s head of state as well as its head of government. That asks grubby politicians to pretend that they’re the country’s pontifex maximus, the bearer of sacred fire. And so, after the mud-slinging of a presidential contest, we ask the winner to give a soaring address that inspires Americans and sends us home with a comforting sense of our star-spangled awesomeness.

Before writing the speech I took a look at past Inaugural Addresses. Some, like Lincoln’s Second Inaugural, were quite extraordinary, and if others were more pedestrian at least every president knew what was expected of him and gave it as good as he could. Trump’s rhetoric had alarmed many people, and I thought that his speech should be wholly different in tone from his tweets, that it should try to unify Americans and remind us of what was best in our country. For a model, I liked Ted Sorensen’s draft of the Kennedy Inaugural, minus the mock Augustan flourishes.

When I sent the speech to Miller I told him that whatever Trump said at the Inauguration would be read 100 years from now. As it will. Of what I sent him, nothing remained in the speech that Trump gave, and that was the last speech I wrote for him.

On this day, fifty-six years ago, a man walked up to this podium and brought out a page of paper.

It was windy that day, too windy to read the poem he had brought.

And so Robert Frost recited by heart another of his the poems.

It was called “The Gift Outright,” and it was about land, about real estate.

It spoke to the difference between owning and belonging to the land.

When our country began, it said, we owned the land. But over time we made a country, and then we belonged to it.

And that has made us stronger.

The land was ours before we were the land’s.
She was our land more than a hundred years
Before we were her people.

She was ours
In Massachusetts, in Virginia,
But we were England’s, still colonials,
Possessing what we still were unpossessed by,
Possessed by what we now no more possessed.

Such as we were we gave ourselves outright
(The deed of gift was many deeds of war)
To the land vaguely realizing westward,
But still unstoried, artless, unenhanced,
Such as she was, such as she would become.

When he stood before you 56 years ago, John F. Kennedy spoke to what might have seemed a different country.

It was a poorer country, compared to today.

From without, it was challenged by cold war enemies.

From within, it was challenged by a legacy of racial injustice.

But it was also a country of youthful optimism, that saw only sunny uplands before it.

There was nothing we couldn’t do, we thought.

We could make an impossible pledge to put men on the moon within eight years, and then make good on the pledge.

We were a country that dared to do great things, that built highways and cured diseases, that sought always to do good things, that produced the films the world watched and the music the world listened to.

We were the country against which the rest of the world measured itself.

But where, and in what place, is that country today?

As always, it is right before us.

It has never gone away, not since our founding 241 years ago.

We have always been that country.

If ever we’ve forgotten this, it’s because we forgot what it means to be American, to belong to this country and to each other.

With our Declaration of Independence we bound ourselves to a set of ideals that we were called upon to follow, that we could not betray without being less than American.

At times our greatest of leaders were called upon to remind us of what we were withholding, from Abraham Lincoln on this very spot 153 years ago to Martin Luther King at the Lincoln Memorial before us, a hundred years later.

We are the country of promise, of the American Dream, of a promise to all Americans.

And if the Dream has seemed to fade, we will prove how quickly it can shine again.

All we need do is remember who we are and how we began.

Two-hundred and forty-one years ago we spoke ourselves into existence as a nation with a Declaration that proclaimed the inalienable rights of individuals and the just foundation of government.

That foundation, Lincoln told us, was a government of, by, and for the people.

And what he meant was a government of, by and for the American people.

He was, with Washington, our greatest nationalist, and like Washington responded to his country’s summons with veneration and love.

John Adams put America first too. When presenting his credentials to King George III, as the first American ambassador to Great Britain, Adams said “I have no Attachments but to my own Country.” To which the King replied “An honest Man will never have any other.”

Every country must prefer its own people to all others.

We cannot be the only country in the world required to be indifferent between our people and those of other countries, not without abandoning America’s foundational principles.

Our leaders cannot do so either, without betraying the trust of the American people.

To our closest allies, who share our love of freedom and our democratic institutions, we promise the loyalty of faithful friends.

We will not betray you.

To our treaty partners we renew our pledge to bear America’s share of our common burden of defense.

To our friends across the world, we promise our open-hearted cooperation and amity.

To countries and institutions that wish us ill we offer no favors. To them we offer indifference until they harm us, and reciprocity thereafter.

We know, however, that we are in a period of transition, where new alliances with erstwhile rivals seem within our grasp, where new friendships hold the possibility of a just peace in the Middle East, and the defeat of merciless Islamic jihadists.

For ourselves, and with our allies, we must ensure that our strengthened armed forces continue to preserve the world’s peace.

We must rebuild our weakened military, and above all must never show that fatal lack of resolve that invites adventurism by other countries, and the contempt of the world.

To our friends we offer the trade treaties that make both sides better off, and in whose benefits all Americans share.

To them as well, we offer the open door of immigration policies that make all native-born Americans better off, and not only the most privileged of Americans.

We will secure our borders, but at the same time will seek immigrants who come to us by legal means, who will enrich America, who share in our commitment to liberty and democracy, and who come here because they love America and seek to become American.

And when they are so admitted, we will prize them as people who now are one of us.

Who we are, who we will be, will depend on the Americans of tomorrow, the immigrants we welcome, the children we bring into the world and educate as American citizens.

Frankness compels me to confess that our education system has failed our students, who rank poorly when matched against students from other countries.

We are told we must accept mediocrity. We cannot do so, and remain American.

Americans love success and will not tolerate mediocrity.

Our system of education is going to change, and it’s going to put students and student success first, and we’ll not permit anyone or anything to get in the way.

The American Dream is that everyone may rise, wherever they’re from, that our children will have it better than we did. We are told this is no longer the case. That must change, and we must begin by reforming our system of education, and in the process abandon ancient bigotries and antique educational structures.

We must also remove all the barriers to advancement created by wasteful regulations and laws, and by a Tax Code desperately in need of reform.

We have placed a stumbling block in the path of the entrepreneurs and innovators who are the source of our riches and the very embodiment of the American spirit.

We have sent jobs to other countries and taken them from Americans who seek work.

We have deprived our fellow countrymen of the dignity of labor.

All this must change, and in the manner prescribed by the Constitution.

Our Founders knew that freedom is lost when a single person rules as a king and exercises all the power of government.

To prevent this from happening to America they separated powers amongst the different branches of government.

And then, lest a president seek to ignore the wise restrictions they placed on his powers, they added one final injunction, to “loosen the bonds of kings.”

Nothing is a greater betrayal of this Oath, more non-American, and more dangerous to liberty, than a president who, ignoring Congress, purports to rule by executive order.

Faithful to the Constitution, Congress and the presidency must unite to amend America’s immigration, tax and regulatory laws.

Faithful to the Constitution, Congress and the presidency must unite to repeal laws that are wasteful gifts to special interests.

Faithful to the Constitution, Congress and the presidency must unite before America pursues protracted military conflicts.

And these are the principles that will govern our administration, for a country to which we all belong.

With confidence in the right, with pride in our country, with reverence for our Founders, with love for all our people and with the prayer that the Creator will cause his light to shine upon us, America emerges from indecision and self-doubt and announces its return to greatness.

F. H. Buckley teaches at Scalia Law School, and is the author of “The Republican Workers Party: How the Trump Victory Drove Everyone Crazy, and Why It Was Just What We Needed,” Encounter Books, September 2018.