Anyone who supports the struggle for freedom should find the sounds and images coming from Tehran thrilling. 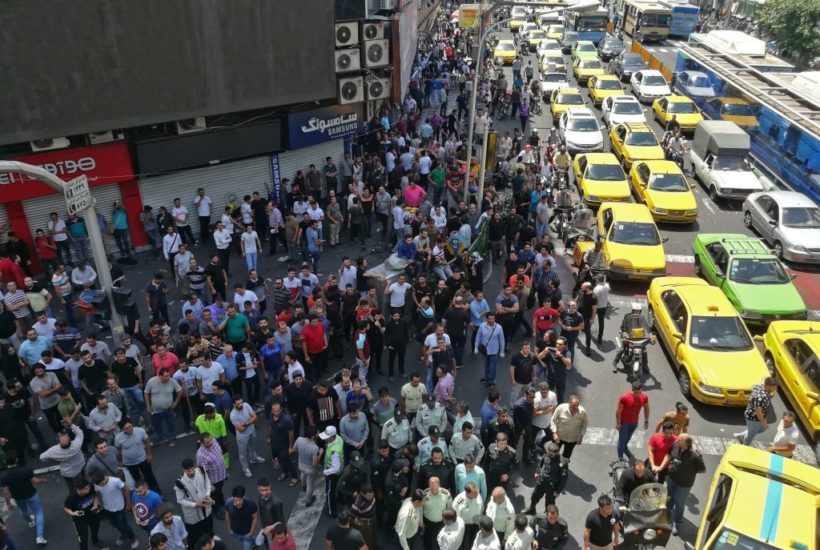 Tehran is on fire right now.

No, I’m not talking about the World Cup match between Iran and Portugal. (They drew 1-1.) The protests that began in Mashhad, Iran’s second-largest city, on December 28 and quickly spread throughout the country have picked up steam in the capital in the last few days. Today saw the biggest protest in Tehran in six years, as the Grand Bazaar closed and demonstrators made their way from there to the parliament building to express their discontent with their government. As the protest began, Iranians called out to shopkeepers who wouldn’t close, “Coward!” Thousands of people marched and chanted in the streets of the capital, and the regime sent riot police to beat and tear-gas them into submission. It didn’t work; large groups of protesters rushed at the police, forcing them to flee, and torched many of the motorcycles they left behind. The government set aside four stadiums and six parks as places of legal protest; demonstrators are not interested in following the rules of a repressive regime.

Like the Mashhad uprising, this one in Tehran—and my sources tell me similar ones are taking place today in Shiraz, Qeshm, Kermanshah, and Mashhad—began over economic concerns and almost immediately turned political, as Iranians recognise a corrupt theocracy has no concern for the citizens who keep it fed. Iran’s currency, the rial, has lost half its value against the U.S. dollar in less than a year; the government has set an exchange rate of 42,000 rials to $1, but dollars are going for 90,000 rials on the black market. In his sermon celebrating the end of Ramadan, Supreme Leader Ali Khamenei urged his countrymen to stop going abroad and taking foreign currency out of Iran.

Footage coming out of the country indicates just how deep the discontent is. One huge group of young people chanted “Marg bar diktator!” (“Death to the dictator!”) on the streets of Iran’s capital. Another shouted, “Marg bar zed-e velayat-e faqih!”, velayat-e faqih being the principle of absolute clerical rule that places an ayatollah at the head of Iran’s dictatorial government. The chants heard in Iran today suggest revolution is brewing: “Leave Syria alone. Think of us instead!” “Our enemy is right here, they lie when they say it’s America!” “Beware of the day we pick up arms!” “We will fight, we will die, we will take back Iran!” “We will fight, we will die, we will not accept humiliation!” “Death to Khamenei!” (Two other good ones aimed at the supreme leader: “We need no trashy leader!” and “Cannon, tank, firecrackers—mullah must be killed!”)

Anyone who supports the struggle for freedom should find these sounds and images thrilling. And they just might mark a turning point in Iran. It’s not simply the fact that today’s protest, as I mentioned, is the biggest in the country’s capital since 2012. A crucial class is now all in. It’s possible that without the support of the bazaari, as the influential traders and merchants are called, the Islamic Revolution that toppled the shah in 1979 might never have succeeded.

This increased unrest comes just days before the annual Free Iran Gathering held near Paris by dissidents working toward a democratic Iran. One of the promotional posters, produced by the Organization of Iranian American Communities, has a slogan that’s short and sweet. “Our Mission: Regime Change by Iranians.”