The abject stupidity of the war on vaping 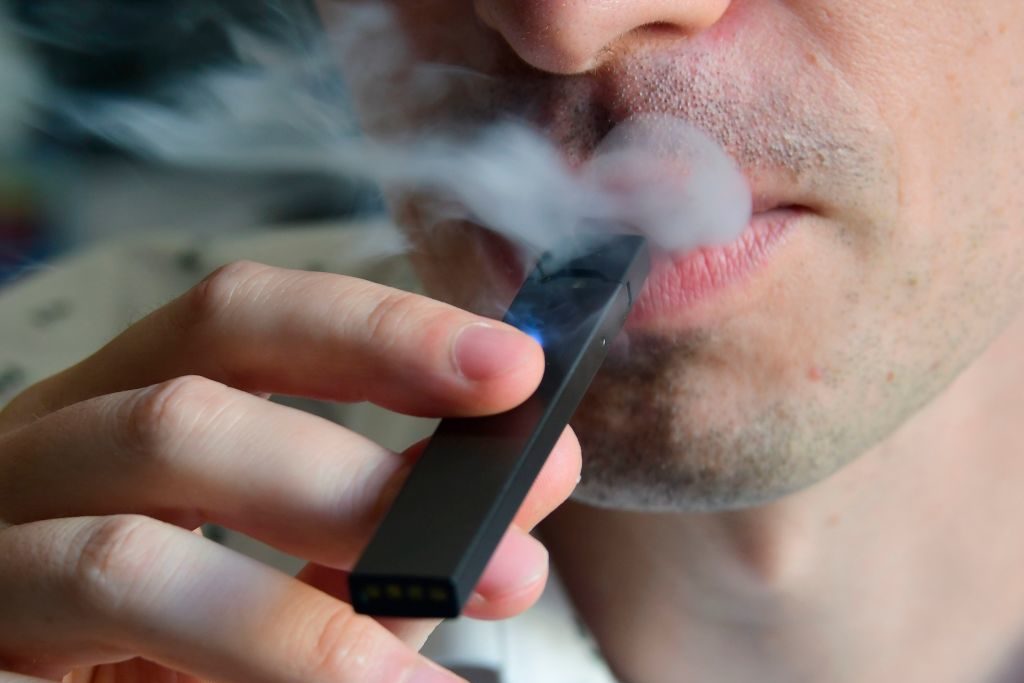 An illustration shows a man exhaling smoke from an electronic cigarette in Washington, DC on October 2, 2018. – In just three years, the electronic cigarette manufacturer Juul has swallowed the American market with its vaporettes in the shape of a USB key. Its success represents a public health dilemma for health authorities in the United States and elsewhere. (Photo by EVA HAMBACH / AFP) (Photo credit should read EVA HAMBACH/AFP via Getty Images)

The abject stupidity of the war on vaping

It’s amazing how quickly a health panic can spread once public officials and media have decided to run with it. Despite data and anecdotes galore showing that vaping can help cigarette smokers quit, the bulk of the US political establishment now seems intent on stamping out this potentially life-saving habit. To that effect, they’ve been employing lawsuits, legislation, taxes, and whatever else they can to curb the sale of nicotine vaping products — and taking their cues from the well-worn crusade against cigarette companies.

Contra the war on ‘Big Tobacco’, however, this crusade features ‘public health’ advocates with no claim to scientific soundness or the moral high ground.

JUUL Labs has become the biggest scapegoat for folks looking to get tough on vaping, even as it has increasingly limited its product offerings and narrowed its marketing agenda in response to public fears. JUUL — which launched in 2015 and quickly rose to the top of the market — announced on November 7 that it would stop selling Mint JUUL in the US and, earlier in the month, stopped selling crème, cucumber, fruit, and mango flavored JUUL pods ‘pending FDA review’. It also recently announced a cessation of lobbying and many marketing activities.

But these concessions don’t appear to be helping. In California — a bellwether for bad policy and prosecution trends — the state attorney general and Los Angeles County are suing JUUL. In a November 18 press release, they accused the company of having ‘targeted young people through advertising and failed to give warnings about the product’s chemical exposure and risks’, as well as having ‘failed to verify the age of California consumers’ making online purchases.

As is typical in these sorts of performative prosecutions (previous AG Kamala Harris’s cases against Backpage come to mind), California authorities use any innovations that make a product attractive for adults as evidence of intent to secretly court inappropriate customers. For instance, one of the things that makes mass-market vape products like JUUL popular is they can be easily charged via USB and aren’t bulky or complicated (they don’t look like ‘some steampunk didgeridoo’, as a friend put it recently). But California faults JUUL for these features, saying it makes their use ‘hard to supervise’ and makes it hard to keep them ‘out of the hands of adolescents’.

New York is also suing JUUL, alleging that the company engaged in ‘deceptive and illegal practices’ in the ‘marketing and sales of its patented JUUL electronic cigarettes’. In the vein of so many moral panics before, the state’s complaint suggests any marketing of flavored products is self-evidently meant to target children (even though flavored products are incredibly popular with adult vapers and one reason many former cigarette smokers cite for now preferring vaping to smoking). And it implies that the use of things like bright colors, hashtags, and a ‘catchy, hip phrase’ in ads were part of a nefarious ploy to target kids. The state also blames JUUL for the fact that some consumers wind up overusing the company’s products; for teenagers not knowing enough about nicotine exposure; and even for some retail stores still selling JUUL products to people under age 21, in violation of New York law.

JUUL is also being sued by the family of a 15-year-old New Yorker who claims she is addicted to vaping. ‘Defendants are to blame,’ says the suit. It accuses JUUL (in which tobacco company Altria has a 35 percent stake) of ‘mimicking Big Tobacco’s past marketing practices’ and using ‘deceptive’ youth marketing business practices adjudged to violate federal racketeering laws with ads featuring ‘themes that resonate with teenagers’.

The paranoia and bad policy proposals extend way beyond JUUL, however. In Congress, they’re talking about banning most vaping products even as they consider decriminalizing marijuana federally.

President Donald Trump has been going back and forth on support for a ban on flavored nicotine vaping products. After initially promising a federal ban of all but tobacco (and possibly menthol) flavored vape products, he backed off just before the announcement was about to be made. ‘Officials said the blowback to Trump’s vow to ban most flavored e-cigarettes had rattled him,’ reported The Washington Post last week.

Trump has also expressed concerns about the effect prohibition would have on the vaping market. ‘If you don’t give it to them, it’s going to come here illegally,’ he told reporters last Friday. ‘That’s the one problem I can’t seem to forget. You just have to look at the history of it. Now, instead of having a flavor that’s at least safe, they’re going to be having a flavor that’s poison.’

I’m not sure the president has ever been so right. Alas, this commonsense and history-based take is a rarity in government realms, right now.

The American Medical Association (AMA) is now recommending a ‘total ban on all e-cigarette and vaping products’ that aren’t classified by the US Food and Drug Administration as ‘smoking cessation’ aids.

Of course, AMA represents folks with an interest in the medicalization of vaping. Pharmaceutical companies, physicians, and other entrenched industries — plus the politicians who cater to them — benefit when people have to take pills to help them quit smoking or still see doctors/visit pharmacies/get some gatekeeper’s permission in order to access vaping products that can help them quit. And bureaucrats benefit, too, as medical devices present more possibilities for regulation and fee collection.

But consumers (and public health) lose. And are already losing, thanks to more of the same regressive and prohibitionist policies that pad government pockets while harming the very people they claim to help.

Even in many places where bans aren’t yet being considered, authorities have already imposed such high taxes on vaping products that buying them through the legal market becomes less and less of an option for people. In Washington, DC, buying JUUL pods can be more expensive than keeping up with an equivalent habit in cigarette smoking. Some stores have already started stocking what are clearly black-market vapes at lower prices (which, alas, your average consumer may not be able to spot, thus putting their health at risk), while a lot of DC vapers travel to nearby Northern Virginia to find legit JUUL pods at a reasonable price, or have friends their bring them in.

Informal and formal smuggling economies (and all the associated problems these can bring) will only increase as crackdowns and taxes increase.

The anti-JUUL, anti-nicotine-vaping efforts represent a fundamentally flawed crusade, one premised on panic about ‘vaping linked illnesses’ and deaths that have been cropping up around the country, and teenagers taking to JUUL and similar nicotine vaping products like those in earlier generations did to regular cigarettes.

As in earlier generations, this habit is worth making legally off limits and actively discouraging for minors. But the panic about a teen vaping epidemic is way overblown. For one thing, frequent use of vaping products is rare among teenagers who didn’t previously smoke cigarettes (0.1 percent in 2017 and 1 percent in 2018), according to an analysis of the National Youth Tobacco Survey data.

Flavor bans are supposed to make vaping less attractive to young people — which means that, if they work, the result will be to send a lot of teens back to what is an indisputably more dangerous habit.

Some young people will always find a way to obtain adults-only products. For them, and for the many adults who can choose for themselves, vaping still represents a much, much safer alternative to regular cigarettes. And for anyone who vapes, using legal products from known and accountable companies is obviously much safer than turning to black market or questionably sourced products of the sort that have been the real culprit in ‘vaping-linked’ health problems and fatalities.

Though it’s hard to tell from much of the breathless media reports on the matter, or statements from shameless attorneys general, there’s nothing about vaping per se that is making people sick, nor is it the nicotine. What’s causing problems is certain filler substances — mainly vitamin E acetate, a form of synthetic vitamin E — used in some foreign or black-market THC vapes.

To respond to that set of facts by banning flavored nicotine vaping products is like the government responding to counterfeit multivitamins killing people by banning all supplements except Riboflavin. It makes no sense.

Not only has the recent wave of vaping-linked deaths and illness had nothing to do with the nicotine vaping products that opportunistic politicians are now targeting, but making safe and legal vape products less available for responsible adult consumption, taxing them to prohibitively expensive prices, and instituting adult vaping bans will only drive both adult and minor vape users to much riskier products.