We are about to find out how robust civilization is

The hardships ahead will be like nothing we have ever known 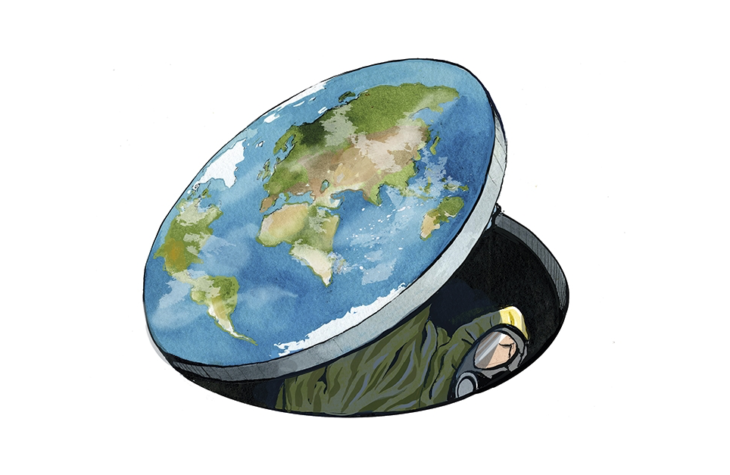 We are about to find out how robust civilization is

On Sunday, lonely as a cloud, I wandered across a windswept moor in County Durham, England, and passed a solitary sandstone rock with a small, round hollow in the top, an old penny glued to the base of the hollow. It is called the Butter Stone and it’s where, during the plague in 1665, coins were left in a pool of vinegar by the inhabitants of nearby towns and villages, to be exchanged with farmers for food. The idea was that the farmer or his customer approached the rock only when the other was at a safe distance.

Four modern coins were on the rock, anonymous offerings to the spirits of the moor. Never once in my six decades did I expect to be back in a 17th-century world of social and physical distancing as a matter of life and death.

There are no good outcomes from here. Many people will die prematurely. Many will lose their jobs. Many businesses will go under. Many people will suffer bereavement, loneliness and despair, even if they dodge the virus. The only question is how many in each case. We are about to find out how robust civilization is. The hardships ahead are like nothing we’ve known.

The British government has been unusual in ramping up its social distancing measures, rather than rushing them all at once. This resulted in a good deal of bafflement and criticism, some of it justified. The driving motive was concern that a resurgence of the virus after its initial suppression would be a disastrous outcome, because people would not allow themselves to be curfewed twice, so the timing had to be right. But the vicious experience of Italy has changed everything. So when the darned models revealed that a single ‘managed’ peak here leading to eventual herd immunity might kill 260,000 people and overwhelm the National Health Service, the strategy shifted from ‘delay’ to ‘suppress’.

The UK government is now effectively admitting that even if drastic curfews lead to successive waves of the disease, that may be the least worst outcome. It is still a daunting prospect. Successive waves mean successive curfews and successive body blows to the economy. If we clamp down hard now and the infection rate drops, then we might be able slowly and cautiously to restart the economy in the summer but have to clamp down again when the virus resurges. Each time we do this, it will be more painful, but at least the health service will be that much better prepared, with more intensive-care beds, more isolation facilities, more ventilators, more and newer testing kits, more data on the efficacy of repurposed drugs.

Moreover, each time the virus re-emerges, there will be more immune people to help look after the sick. Once you’ve had the disease, and assuming the immunity you acquire is long-lasting (not yet certain), then you are in a special category of person who can be employed — or volunteer — for what would otherwise be risky work, and for looking after older people. Each wave of the disease can then be less awful.

One side-effect of the British government’s step-by-step approach is that the people have got ahead of the authorities. Lots of people have been volunteering to give up gatherings, work from home if they can or travel less before being asked to. The chorus of complaint last week on social media that the government was not doing enough is a sign that people are now telling the government what to do — which is how it should be in a democracy. A prime minister is being criticized for not ordering us to do things, but ‘advising’ us. Better than the other way round. As the libertarian thinker Douglas Carswell put it on Monday: ‘Treat people as responsible adults and they will behave more responsibly.’

Until this year I thought this kind of infectious pandemic could not happen today. The defeat of infectious diseases as a cause of death has been so complete as to seem invincible: plague, smallpox, cholera, typhoid, measles, polio, whooping cough and many more eradicated or nearly so. The failure of terrifying new animal-derived viruses like Hanta, Marburg, Sars, Mers, ebola, swine flu, bird flu and zika to cause more than a local or temporary interruption of the march of progress left us complacent. (Only HIV went global.) The advance of science allowing the rapid reading of the genome of the new coronavirus gave us false confidence: we would know how to beat it by the time it got out of China. It seemed that only the most innocuous of common colds, and milder forms of flu, seemed capable of remaining ubiquitous. And coronaviruses are a common cause of the common cold, so (despite Sars) they seemed like pussy cats, not tigers.

It turns out that I and many others were badly wrong. The human race has been playing epidemiological Russian roulette all along. It has taken Mother Nature a long time to put a bullet in the right chamber, combining high contagion with asymptomatic carriers and a significant death rate, but she has done it.

We now know that we should have been building far more preparedness for such an event. The World Health Organization has been asleep at the switch. The Wellcome Trust did well to establish a Coalition for Epidemic Preparedness Innovation in 2017 in partnership with the Gates Foundation along with the Indian and Norwegian governments, but it should have been started much earlier.

Against many risks, excess precaution is a mistake, doing more harm than good by preventing innovation — but not in the case of threats that can explode exponentially from small beginnings. Apart from Singapore, which built a special hospital after Sars, and South Korea, which geared up to test people and gather data on a huge scale, the world had done far too little to get ready for this possibility. Everything now is catch-up. And we are trying to catch the fastest runner of them all: an exponential curve.

The number of cases outside China has increased tenfold roughly every 10 days. If it continues at this rate, in two months the virus will have infected 100 million people. A vast experiment is happening as different countries try different strategies, with some in Asia having notably more success than others in Europe. But to stop the virus gaining a permanent foothold in the human population will require every single one of those experiments to work.

In the long run, we will get through this. Effective drugs will be found. Methods for keeping the very sick from dying will improve. The milder forms of the virus will probably out-compete the harsher versions. A vaccine may yet work — though it has come as quite a shock to find out just how little vaccine development has improved in recent decades. Genomics allows us to read viral genomes in a flash and make messenger-RNA vaccines, in which the body manufactures the viral proteins, doing away with the need to put killed or attenuated viruses into the body. None the less, a scientific paper that I failed to read last year warned: ‘The current state of vaccine development is an expensive, slow and laborious process, costing billions of dollars, taking decades, with less than a 10 percent rate of success.’

We must not despair or return permanently to autarky and localism. With the right precautions, an open, free-trading, free-moving, innovating world is possible without pandemics and is essential for raising living standards. Government must both splash the cash and slash many of the things it does that are not urgent to alleviate human suffering, and there are a lot of them. But in the midst of our misery let us be thankful for one thing: unlike many plagues, this one spares children.

This article was originally published inThe Spectator’s UK magazine. Subscribe to the US edition here.