When will American schools catch up with the technological revolution? 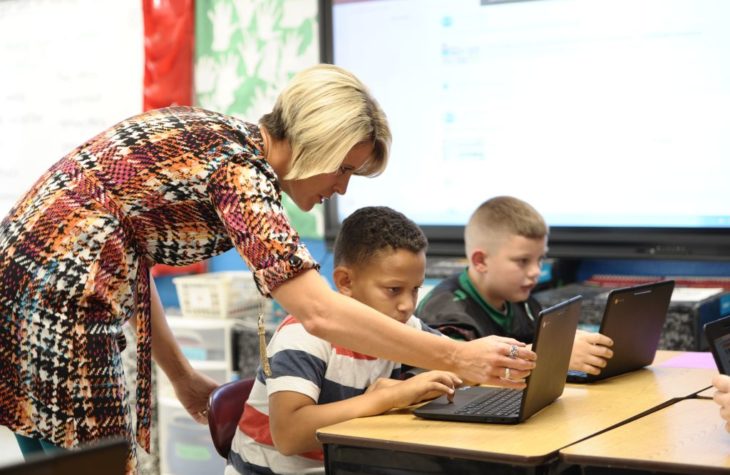 Amy Grady, a West Virginia teacher who ran for State Senate in 2018

When will American schools catch up with the technological revolution?

As 75 million children head back to school for the fall semester, there are concerns among academics, technologists and social scientists that the current American education system is no longer fit for purpose.

Such is the pace of the technology revolution that children in kindergarten or middle school today are likely to be educated for a world that will largely have disappeared by the time they graduate. Even those in high school today are going to find a different world where learning about the past or the present has less and less value for the future.

Even universities, which have changed little in the past 25 years are confronting a revolution where whole professions, such as accounting or medicine, which have provided a steady income stream are going to be under assault. New technologies, driven by the artificial intelligence revolution, are expected to decimate whole professions and jobs over the next 15 years.

Yet, no moves have been made by the government in Washington or individual states to reform the education system, which remains one of the most conservative structures irrespective of political party.

There are isolated pockets of innovation designed to prepare students for this different world. For example, IBM and the Rensselaer Polytechnic Institute in upstate New York have teamed up to provide a new kind of immersive classroom to teach Mandarin Chinese. Using AI and virtual reality, students can be teleported to a Beijing street or to a Chinese restaurant.

The virtual environment uses sensors to adapt to the words and actions of the students while AI can absorb speech and movement so students can use their Mandarin to talk to street vendors or order food in the virtual restaurant.

It’s striking that such a pioneering system is being used to teach Mandarin as it is China that is showing the way of future education.

Tens of millions of Chinese middle and high school students already rely on some form of AI to learn and to monitor their progress. The Chinese government has said that reforming the education system is a vital part of their efforts to compete in the world and to ensure that their students lead in the race to push science and technology to new limits.

The reform of Chinese education is a simpler process than it is in any Western country. China is centrally controlled so an edict from Beijing is likely to be obeyed without much debate. At the same time, Chinese students are intensely competitive and will readily adopt any solution that might advance their grade. Finally, a bunch of tax incentives from Beijing have encouraged the explosive growth of ed-tech companies in China.

Meanwhile, back in the US, the education system has, on the one hand, a curriculum and a process still locked somewhere in the last century with students who routinely use VR, would happily embrace AI and use every piece of modern technology at home but have to leave such tools at the classroom door. A report out last week reported widespread cheating by American students who use tiny earbuds linked to their cellphones to download answers to papers and to use precise software to get essay answers that they can pass off as their own.

Exactly what a new curriculum should look like is a tough puzzle to solve. Elon Musk’s answer for his five sons was to found Ad Astra in 2014, his own school which would emphasize creativity and problem-solving. The school has no formal curriculum and no grades with the children learning together in teams. There is no sport, music or foreign languages but the children do learn about AI and how to build things from weather balloons to flamethrowers and battle bots. The school even has its own currency, the Astra, to teach the kids about entrepreneurship.

Such a radical approach is clearly the province only of single-minded billionaires who can afford to operate entirely outside a more formal system. For the rest of us, a new curriculum is vital if our children are not going to be casualties of the technology revolution where they risk either never finding work or getting a job with no prospects.

There are lessons to be drawn from the first phase of the technology revolution which may have resulted in a prolonged economic boom with low unemployment but it has left millions of workers behind. For example, the minimum wage for waitresses and other workers who rely on tips has remained unchanged  for nearly 20 years. The standard of living for the bottom 40 percent of American workers has either declined or remained stagnant while the income for the top 10 percent has risen dramatically.

This translates as an urgent need to change who is educated with what. Otherwise, the rich will continue to benefit from their exceptional access to get better results for their children and the less fortunate will fall further and further behind in education and employment which will exacerbate existing social divisions.

The world of textbooks shows what happens when market forces are brought to bear on education. Students are increasingly turning away from buying expensive textbooks and instead are either renting from new textbook companies or buying a second-hand book. As existing education publishers see their profits shrinking, so textbook prices have risen 183 percent in the past 20 years which in turn has further fueled the growth of the alternative markets.

But, while the textbook market may have changed, neither the way teachers teach nor the content of class courses has changed much. This is all the more remarkable when so much of teaching is about the past and so much of that knowledge is now available courtesy of Dr Google and the click of a mouse.

A new curriculum would embrace the world of AI, VR, technology and creativity to look forward into a world that is heading towards us at an ever faster speed. Just as important, there would have to be a change in mindset both at the Department of Education and in the teaching profession that would accept that stability has gone forever. In its place is a world that will be constantly changing and for students to be prepared to meet the fresh challenges, the education system will have to match the pace of that change

A small illustration of the challenges that lie ahead: Scientists across the world are working to map the brain and at the same time to understand just how humans learn. That work is moving very fast and we may come to a time in the near future when we will know just how we learn and how best to stimulate that learning process to deliver new and better outcomes. We’re not there yet but when we are, education will need to be there as well.

The education debate is important, especially if America is in a defense, technology and economic race for dominance in the 21st-century world. China has already recognized that a revolution in education is essential if the next generation of Chinese leaders are to understand and control the world around them. There seems to be no such awareness in Washington and time is running out for America to catch up.