What anti-racism really means and how to talk about it

In Critical Race Theory, ‘racism’ means ‘systemic racism’, which is said to be ‘the ordinary state of affairs’ in the United States 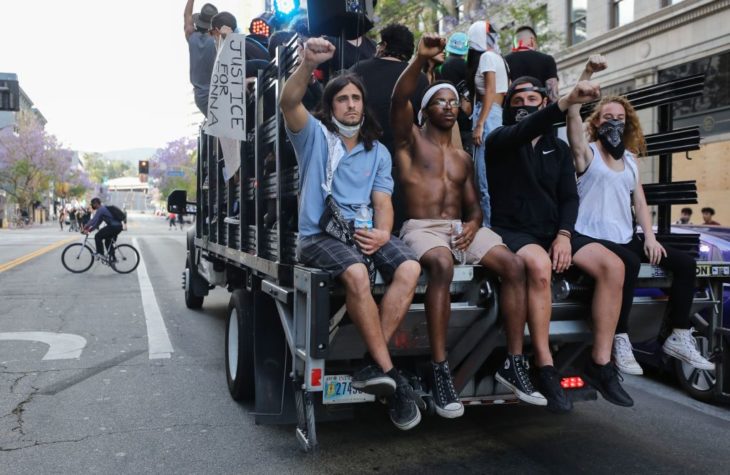 Protesters ride a truck during a peaceful demonstration in Hollywood

What anti-racism really means and how to talk about it

How do you navigate conversations with people when the default assumption is that you’re a racist? What do you do when calmly and sincerely stating that you are not a racist is taken as evidence of your guilt of racism? First, understand what the terms mean, where they come from, and who are the proponents. ‘Anti-racism’ means being against racism, except for one important detail. What anti-racist advocates mean when they use the word ‘racism’ isn’t the same as what most people mean.‘Anti-racism’ comes directly from the academic scholarship of Critical Race Theory. In Critical Race Theory, ‘racism’ means ‘systemic racism’, which is said to be ‘the ordinary state of affairs’ in the United States. Systemic racism is believed to be the explanation for every disparity in outcomes in which some minority groups, especially blacks, have worse outcomes than whites (or Jews and Asians). The academic definition of ‘anti-racism’ includes ‘working to identify internalized racial dominance if you are White’ or a ‘Person of Color’, ‘joining organizations working for racial justice’, and ‘seeking out continuing education’ in the theory of ‘anti-racism’. It is described as a ‘lifelong commitment to an ongoing process’ that includes social activism to end what it calls ‘racism’, which has an equally peculiar definition.Robin DiAngelo, a New York Times bestselling scholar of the ‘critical whiteness’ aspect of Critical Race Theory, sees racism in everything. She explains what she calls ‘racism’ this way: ‘the question is not “did racism take place?” but instead “how did racism manifest in this situation?”’ In other words, all situations contain racism, and it is up to the anti-racist activist to uncover it. To do anything else is described as — you guessed it — being a ‘racist’ by upholding ‘racism’.Second, understand how these ideas are used unfairly against you. The ‘anti-racism’ program offered by Critical Race Theory offers no neutrality. Everyone is either an ‘anti-racist’ or they are ‘racists’ by default. The lines of literature in which DiAngelo situates her claims clearly state that there is no such thing as being not-racist, and she repeatedly asserts that neutrality on this issue means favoring ‘racism’. Not even progressives are safe. DiAngelo writes, ‘white progressives cause the most daily damage to people of color. I define a white progressive as any white person who thinks he or she is not racist, or is less racist.’This false dichotomy is central to the ‘anti-racism’ narrative currently being forwarded, especially by other New York Times bestselling authors like Ijeoma Oluo, Layla F. Saad, and Ibram X. Kendi, whose books are currently dominating the bestseller lists. Put bluntly, the only option these activist-scholars offer is to join their movement or accept being a ‘racist’.Anti-racism is defended further with another hot buzzword: ‘white fragility’. DiAngelo created this idea and describes it as a state of ‘racial stress’ that white people find intolerable when confronted with the fact of their ‘complicity’ in ‘racism’ and ‘white supremacy’. She claims white complicity is an automatic result of receiving the benefits of white privilege, which all white people necessarily have. She, being a white woman, then names her personal goal not as overcoming racism, which would be impossible (she writes that it is not possible to construct a ‘positive white identity’), but as progressively becoming ‘less white’.DiAngelo further asserts that white people confronted with their complicity in racism cannot accept it and instead engage in a number of ‘defensive moves’ to avoid the accusation, including disagreeing, staying silent, becoming emotional, and going away. These ‘maneuvers’ expose their white fragility. ‘White fragility’ is therefore a charge that cannot be denied and thus separates all white people into two categories: racists (who admit it) and racists (who are too fragile) to admit it.Third, agree that racism is horrific. This is obvious, so it’s easy.Fourth, calmly expose and explain the bait-and-switch definitions. An identical argument could be made about literally any position: there are two types of people — Trump supporters who admit it and Trump supporters who are too afraid to admit it; those who claim they don’t like pancakes and those who are too deceitful to tell the truth that pancakes are awful; witches who confess and witches who are too in league with the devil to admit it. If white fragility is a real phenomenon, it needs a better litmus test than this.

Finally, simply ask if they can conceive of any better way to address racism than through this definition of ‘anti-racism’ and ‘white fragility’. Most people understand the ‘colorblind’ approach, which scholars like DiAngelo constantly criticize, is a good, though imperfect, starting place for something better.Almost everyone today knows racism is morally wrong and abhors it. Many people understand there are better ways to counter racism than by reading it into every situation and trapping individuals in a malicious accusation that paints them as ‘racist’. And most people reject Critical Race Theory’s approach to ‘anti-racism’ once they understand that the theory is totalizing, systemic, and ever-present, and become eager for better alternatives like making race matter less for everybody.We were making great progress on these issues by treating people as individuals, judging by the content of character, and making efforts to listen more and listen better. We don’t need to be manipulated into an ‘anti-racist’ program that gets those things backwards to ‘do better’. What we need are better tools to have these conversations.Dr James Lindsay is the founder of New Discourses. Dr Peter Boghossian is an assistant professor of philosophy at Portland State University. They are the co-authors of How to Have Impossible Conversations.

By Peter Boghossian and James Lindsay

Dr James Lindsay is the founder of New Discourses. Dr Peter Boghossian is an assistant professor of philosophy at Portland State University. They are the co-authors of How to Have Impossible Conversations.