Even in a riot, the races aren’t equal 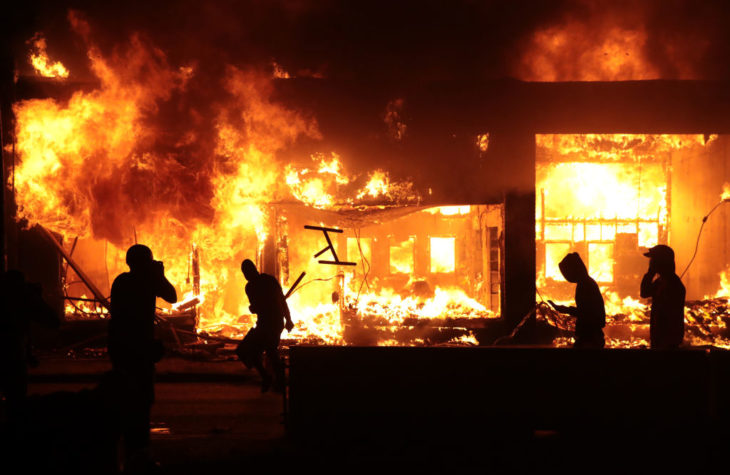 There is no right to burn down your neighborhood, but it’s always an option. Freedom means choice, and real freedom must include the choice of self-destruction — but not destroying someone else’s neighborhood. Especially not when the neighborhood is mostly black and poor. That is what the privileged whites of antifa are doing by instigating disorder and destruction in Minneapolis’s 3rd precinct and elsewhere. Cost-free kicks at black people’s expense: the height of white privilege.

Race is the American sickness, and though everyone is sick of it, no one has the cure. The murder of George Floyd and the fact that it took riots before his killer was charged, confirms, should anyone still need confirmation, that Americans are still not equal before the law. Don military fatigues and storm the Michigan statehouse, and the police will recognize you as a fellow patriot. Pass a counterfeit bill while black, however, and no law can protect you from the law.

The laws that antifa learn to despise in their four-year colleges guarantee their racial privilege. If you’re black and angry enough to burn down banks and stores in your black neighborhood, tomorrow you’ll have to live in the ruins. If you’re white and you burn down banks and stores in someone else’s neighborhood, tomorrow you’ll be back in white world: fixing bikes or brewing espresso, waiting for The Man to cancel your student loans, living in a historic urban neighborhood whose historic black population you and your white friends have gentrified out of sight.

This isn’t the first time masked gangs of property-holding whites have stormed into black neighborhoods and smashed the place up to show they are above the law. They used to do it to preserve their racial privilege, to exclude blacks from exercising their rights of participation. Now they do it in the name of the racially underprivileged. Either way, they never asked for an invitation. They don’t have to, do they? They’re white and they know their rights.

Excuse the profanity, but there really are such things as ‘intersectionality’ and ‘white privilege’. Not in the Marxist cant that antifa learn in grad school, a European ideology that shows how the radical white left, like the racist white nationalists, are clinging to their privileges as hereditary Europeans. There is no need for these ideological contortions: like the mind of a grad student, they’re luxury products. The simple historical facts are enough.

There is no need for the New York Times to promulgate the false history of the 1619 Project, no need to trash the peerless inheritances of Western Civ in revenge for the shameful ones. The simple fact is that this nation was founded by white property-holders. Many were slave-holders, and the rest more concerned about import duties and preserving a common front against the colonial power than about the humanity of Africans.

The European colonial powers, like all empires, preserved certain rights for certain people. The whites had the rights. In the 1950s, the British had universal suffrage and a welfare state at home, but intersectional lavatories in the empire: Jan Morris recalls her surprise on landing in Egypt and seeing that there were separate lavatories not just for men and women, but also for different ranks and races.

It went much the same in America’s internal empire under Jim Crow. Since the Sixties, the white rulers have preserved their power by inverting the hierarchies: from fanatic racism to the negations of fanatic ‘anti-racism’, from insulting the law of equality by exclusion to insulting the law of equality by ‘affirmative action’. But the whites, especially the richer ones, still have the rights. The rich whites have made concessions in order to preserve their rule. They’re the ones who set the terms of social engineering, now as then.

This is why wokeness, the intellectual boot camp for antifa recruitment, is stronger on private campuses than state ones. It is why the New York Times mixes advice on luxury consumption with lectures on the correct racial attitudes: both are forms of self-assertion. It is why antifa and the Michigan militia can play at paramilitary dress-up and fighting the state while black people are killed by it without having to dress for the occasion.

The consequences are the Pottery Barn rule of race: you owned it, you broke it, they pay for it. The sad truth is that black people could riot every summer in every city and it wouldn’t make a bit of difference to the rest of the country. The American juggernaut would, as it has done for centuries, roll right over them and send them the bill.

The sad truth is also — and this is a corollary in a way — that the white people, or some of them, are yet again making it all about themselves and their problems, and violently stamping that drama on the lives of black people. That goes for the groypers as for antifa: both are stamping their trotters and demanding their hereditary spot at the trough of middle-class life.

As this is still America, groups of young, entitled and angry whites are much more of a threat to the system. The history of European revolution, the white man’s history that antifa cherish and preserve in New World exile, shows that a state which cultivates an educated clerical class only to thwart its upward mobility is heading for trouble. We might add that a society without common grounds of heredity, experience and education is already in trouble of a kind that makes equality before the law impossible.

The white left knows its rights. First, the freedom to choose exemplary destruction for others. Second, the right to demand protection and favors from the white man’s government: student-loan cancellation and Universal Basic Income, for example. Third, the right to change the system so it works better for its hereditary proprietors. You may not be interested in antifa’s dialectic, but their dialectic is very interested in you. 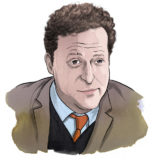